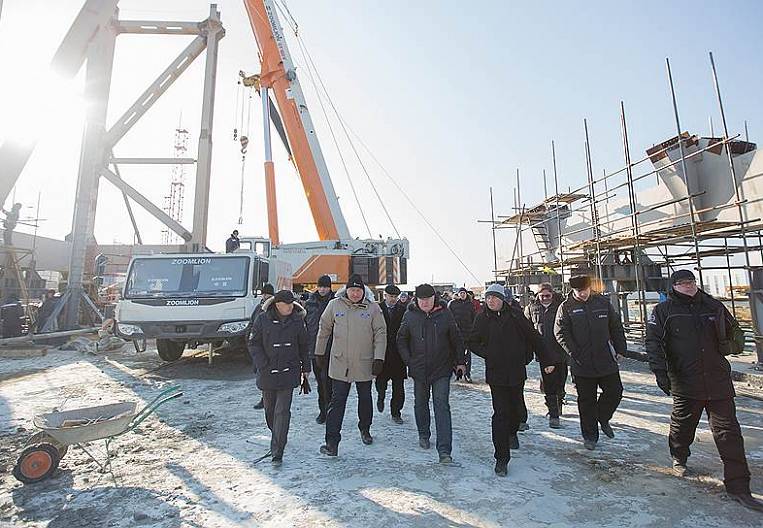 The general progress of work at the Vostochny cosmodrome "leaves much to be desired, even despite the changes visible in recent months," Deputy Prime Minister Dmitry Rogozin said during a recent visit to the country's main construction site. "Spetsstroy Rossii" and "Roskosmos" promise: there will be no more problems - they managed to enter into a "constructive dialogue".

Less than a year is left before the main event in the space life of Russia - the launch of the Soyuz-2 carrier rocket from the Vostochny cosmodrome, which has been under construction in the Amur region for the fourth year already. The launch pad is almost ready, its most complex element - the fire ring - has been created, the hulls of huge MIC-s (assembly and testing buildings of the spacecraft and launch vehicle) have been built.

The other day at the cosmodrome, the inspectorate was visited by Deputy Prime Minister Dmitry Rogozin, who personally supervises the construction process, and this time even brought with him a special presidential commission.

Everything seems to be very clear. But ... On the clock closer to noon, 2 helicopters fly up to the technical building of Vostochny with a slight delay, as stated in the program.

"Watch Rogozin's twitter through 3-2-1 ...", joke the journalists waiting for VIPs.

Coming off the boards, the impressive delegation immediately moves to the "technical room", where they will soon assemble a rocket and a spacecraft, and also move them between buildings along a giant transborder gallery on a special platform on the rails.

“The assembly and testing part of the spacecraft is being laid down, forced - there is movement here. But my criticism is about the sexes. There is no floor either there or there, - Andrey Okhlopkov, deputy head of TsENKI, reports to Rogozin. - We have to start installation of equipment in MIK-s already in March. If Spetsstroy has something to offer, we are ready to listen. "

“We can,” explains Alexander Mordovets, deputy director of Spetsstroy of Russia, “the soil is frozen by more than 1,5 meters. There is a way to electrically heat the soil using an electrolyte. This will consume two megawatts of energy within 60-70 days for the entire area of ​​the assembly and test hall. We have already conducted an examination and found out that the soil will practically not change its properties during thawing. They are even ready to involve a special laboratory so that the whole process takes place under their control. "

It would seem that the builders did not know before that the soil would freeze and in winter it would hardly be possible to fill in what is required? It turned out that they did not know. Later, at the meeting, Dmitry Rogozin once again admitted that even before the construction itself, the cosmodrome designers had made serious mistakes in the design documentation, which had to be eliminated along the way. Until recently, the main problem in the construction of Vostochny was the disagreement between Roscosmos and Spetsstroy over either the absence or lack of elaboration of design and estimate documentation for a number of important objects: some could not build without it, but had to do it others, on the contrary, insisted on the fastest completion of the work. Now it looks like the problems can be solved.

“Partly, the personnel changes in the structure of Roscosmos are connected precisely with the lack of understanding between customers and contractors,” said the Deputy Prime Minister at a closed meeting in Uglegorsk. - It is unacceptable when there are mutual accusations instead of taking and doing what is needed. I want to say that yes, of course, there is a dynamic. But in conditions of sanctions, in conditions of external pressure that is taking place around our country, in conditions when we have clear and felt problems in the economy, here, at the cosmodrome facility, we must show an example of how to organize things. "

After the meeting, both sides finally began a constructive dialogue.

“I think that there are no obstacles to catching up on the schedule on the part of the working documentation for key objects,” said Igor Komarov, appointed head of the Federal Space Agency in January, “at the moment there are still several documents that we plan to issue to contractors based on the results 1st quarter ".

“We need the documentation both for the performance of the work and for bringing into conformity our mutual settlements for the work that has already been completed,” stressed Alexander Mordovets, Deputy Director of Spetsstroy of Russia. “I can assure you that we now have complete understanding with Roscosmos, and we have finally entered into a constructive dialogue.”

Let's go back to the detour. For six months now, the key point for the builders is the preparation of premises for the installation of technological equipment - various engineering devices and systems. If the inspectors still have questions about this preparation at the "technical", then at the launch site at the time of the inspection, almost everything was going according to schedule. And according to the results of the inspection, the commission recommended: do it quickly, cleanly, reliably and without unnecessary expenses.

Rogozin: "Is all the equipment here?"

Okhlopkov: "Everyone is here!"

Rogozin: "And what is assembled from it?"

Okhlopkov: "At the top five?" Everything has already been assembled there, and we are giving the premises back to the builders for further filling. "

Another aspect of the inspection concerned the power supply of the territory - during a detour, Dmitry Rogozin instructed the participants in a large-scale project to work out a gasification scheme from the future Power of Siberia gas pipeline not only to the cosmodrome, but also to the city of Tsiolkovsky.

“In the next month or two, we will sign an agreement with the management of Gazprom, where we will include this design scheme,” Oleg Kozhemyako, Governor of the Amur Region, commented on the Deputy Prime Minister’s order. "By 2018, Uglegorsk, Tsiolkovsky and all ground infrastructure facilities will be provided with gas."

In addition, at the meeting, Dmitry Rogozin said that in the near future the videos from the cosmodrome objects will be published in the public domain on the websites of Roscosmos and the military-industrial complex. "Control over the spending of budget billions," the Deputy Prime Minister stressed, "must be people's control."

At the same time, a day later on the air of the TV channel "Russia" (the program "Vesti on Saturday with Sergei Brilev"), some clarifications were released.

“The cost overruns in the construction of the ground infrastructure of the Vostochny cosmodrome amounted to 13 billion rubles,” said Tatyana Golikova, head of the RF Audit Chamber. - These are our assessments, and they have to be confirmed by law enforcement agencies, because we sent all the documents to the Investigative Committee.

In "Spetsstroy" commented on the statement of the Chairman of the Accounts Chamber of the Russian Federation. "Enterprises of Spetsstroy of Russia": began construction of the Vostochny cosmodrome in October 2011. In 2012, the provision with design and estimate documentation was only 20 percent. And the documentation that was received did not fully take into account the peculiarities of the construction of such a complex object. Today, when we have received from the customer about 93 percent of the design and estimate documentation, it is possible to assess the volume of work performed and their cost. The director of Spetsstroy Rossii, Alexander Volosov, set this task quite tough. An analytical group has been created in the central office of the Federal Agency for Special Construction, which works directly at the construction sites of the cosmodrome. Its task is to help the subordinate enterprise "Dalspetsstroy" to make a reconciliation of settlements. This work is carried out in close cooperation with the customer - Roscosmos. When it is completed, it will be possible to talk about the results, "the press service of Spetsstroy Rossii said.

The press service also stressed that “today the regulatory authorities are conducting appropriate checks. And "Spetsstroy Rossii" provides them with all-round assistance in this. " “Our common task is to do everything necessary to ensure that the Vostochny cosmodrome is built and commissioned on time,” the statement said.

Recall that according to the instructions of the country's leadership, "Vostochny" should be ready by this summer, and the first flight is scheduled for December 2015. The first manned program launches are planned for 2018.

Next time the vice-premier will visit space building in the end of February.