Space harbor in the east of Russia 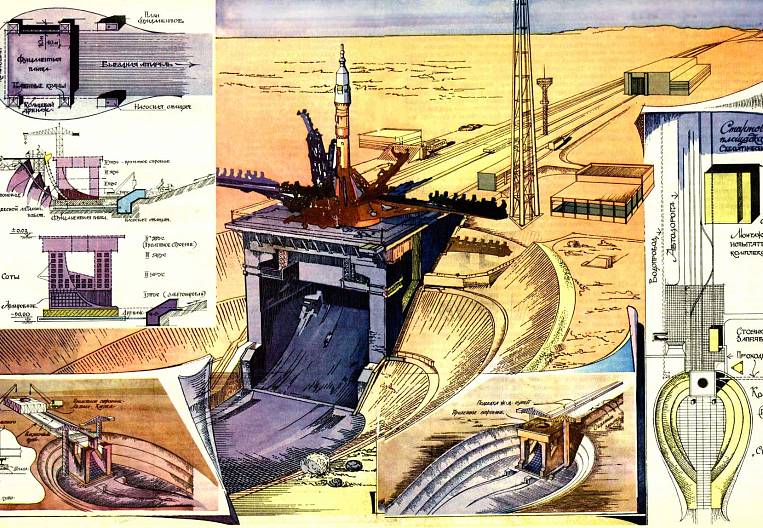 More recently, 60 PC-10 silo-based intercontinental ballistic missiles with multiple warheads, each with a megaton nuclear charge, were on alert here. However, today Uglegorsk has a different purpose: an ultra-modern cosmodrome is being built here. Very soon - in 2015 - the first launch vehicle will go into space from here. The report of the EastRussia correspondent is dedicated to Cosmonautics Day.

The construction of a cosmodrome is a very long process, associated with enormous financial investments, extraordinary stress on construction organizations, and requires the concentration of government leaders and managers. Therefore, it is quite clear that the topic of the construction of "Vostochny" now and then appears in the media, and not always with a "plus" sign. Either Yakut social activists will be outraged by the fact that steps from rockets soaring will fall on their heads, then environmentalists will come with some malicious question, then another state inspector will criticize the builders for inaccurate adherence to deadlines.

And the most important question is why construction is being conducted right here, in the Amur Region? Is there really no place where the climate is softer and easier to build? - The builders of the cosmodrome have to answer this question to almost every group of journalists coming here.

In fact, the government's logic was as follows. First, Russia needs its own cosmodrome, since Baikonur, in fact, is not ours. Secondly, in Uglegorsk part of the way has already been passed - here, on the basis of the Second State Testing Cosmodrome of the Defense Ministry "Svobodny", created for the launch of space vehicles "for various purposes", there were already necessary communications, a significant part of the infrastructure was built. And, thirdly, the most important thing. The construction of such an object as a cosmodrome, when almost half a trillion rubles are pumped into the region, is a real "rocket" for the regional economy. Is it necessary to repeat, how many socio-economic expectations are associated with the construction and work of the "Eastern" in the Amur Region?

To coordinate the construction in the government of the Amur Region, a special structure was created - the Ministry for the construction of the Vostochny cosmodrome. Major General Konstantin Chmarov, who heads this department, told East Russia:

- Eastern is being built on the basis of the Decree of the President of the Russian Federation from 2007 year. From 2008 to 2011, the cosmodrome was being designed, however, it continues now (the object is complex), design and working documentation is being developed. In October 2011, the construction of the first stage of the cosmodrome began. It includes, first of all, the space infrastructure: launch complex, technical complex, industrial and construction base. At the same time, a residential micro-district of a new future city is being built. There are backlogs on separate objects, but in general the construction is on schedule.

- The directorate of the cosmodrome and the organs of the general contractor were formed. The construction coordinator and the customer is the Federal Space Agency Roscosmos. The work of all the structures of this serious project is supervised by the Deputy Prime Minister Dmitry Rogozin. About five thousand people are working on the construction sites of the cosmodrome today with full efficiency - representatives of the contractor and subcontract organizations from all over Russia. The cosmodrome is built by the whole country. The main object to which we are now paying the closest attention, of course, is the launch complex together with the technical complex. He - the basis of space infrastructure. Also, power supply facilities, roads and railways are being built, ”says K. Chmarov.

Deputy Prime Minister Dmitry Rogozin became a frequent guest at the construction site almost immediately after his appointment to the post. Judging by his public statements, he has already mastered the facility and understands where the works are stalling, and where, on the contrary, everything is going according to plan.

In February, for example, Dmitry Rogozin suggested threefold, to 15 thousand, to increase the number of builders involved in the facility. "Take those who were involved in the construction of APEC, in Sochi, transfer them. 5000 people are working at the cosmodrome, do we have that there are no people in the country? "

Is there a risk of deadlines? What is happening today at the construction site of the future spaceport? Correspondent East Russia asked the representative of the press service of the general contractor, GUSS Dalspetsstroy, to briefly describe the picture of what is happening.

- The cosmodrome is a complex multifunctional complex, which is built from scratch in the Amur taiga. This factor was taken into account when choosing the type of building structures, organizing construction and installation work, material and technical and personnel support for construction, as well as determining the range of social facilities that must be created first, the press service of the general contractor told East Russia.

Now the forces of Spetsstroy of Russia are simultaneously working on several of the most important objects of the cosmodrome. All main buildings and structures of the launch vehicle launch complex Soyuz-2 are being actively built. Works have been performed that allow transferring technological units of compressed gases, nitrogen and oxygen for installation of equipment: each of these structures is an entire industrial enterprise.

Work is underway on the kerosene and naphthyl processing unit, the command post, the administrative office building, the process fire extinguishing station, the refrigeration center, the shelter, the central distribution point, the communication tunnels and other facilities without which the space center cannot function. The construction of a technical complex is in full swing, primarily the 24 of the main buildings and structures. The works here are on schedule, the main facilities are being prepared for the installation of high-tech equipment. The first stage of the construction of railways and highways of the cosmodrome has been completed. The construction of the first stage of the external power supply system continues. The installation of the main power equipment.

For professionals who will live and work at the cosmodrome, housing is built with the necessary engineering infrastructure, social and cultural-welfare facilities.

“As for government criticism, it is connected with the delays in the construction of the launching structure of the Soyuz-2 ILV. And the main reason for this delay is the extremely low temperature of the past winter, ”the general contractor’s press service explained. - Therefore, it took additional time to maintain the technical regulations for the conduct of concrete work: it was necessary to create thermal circuits on construction sites and maintain the required temperature in them using heat guns, to warm up concrete. The measures taken have yielded positive results. The streamlined production process did not slow down either on New Year’s holidays or at forty-degree frosts. Construction readiness of priority objects allocated for the installation of process equipment, is provided in accordance with the schedule.

Already, about half of those working on construction sites are Amur residents, and almost 90% are representatives of all the territories of the Far East. Nevertheless, the general contractor was faced with an acute shortage of qualified personnel. To attract them to the construction site, job fairs are held - both in the Amur Region and in other regions of the country.

To increase the prestige of the work, the living conditions of the staff are constantly improved. Renovated comfortable hostels on 1259 places, dining room has a capacity of 1000 people per day, equipped with nine shift camps that can simultaneously take 2917 people, in each of them there are canteens, first-aid posts and bathhouses.

Comments on the topic:

Minister of Economic Development of the Amur Region Vasily Orlov shared with East Russia with your thoughts about what the project will bring and has already brought to the region:

Comment East Russia gave the chairman of the legislative assembly of the Amur region Konstantin Dyakonov:

- Such a grand building is very important for the region. As an economist by education, I expect a multiplier effect for the regional economy from the fact that our people, our business will be engaged in the construction of a cosmodrome. Read More