Coronavirus warmed up the appetite of the Far East

Residents of the Far East stock up on products for future use in connection with the quarantine declared in the country. Many continue to go to stores, despite requests from the authorities to refuse such trips, while others are switching to online shopping. Are retailers ready for rush demand and increased distance sales, EastRussia found out. 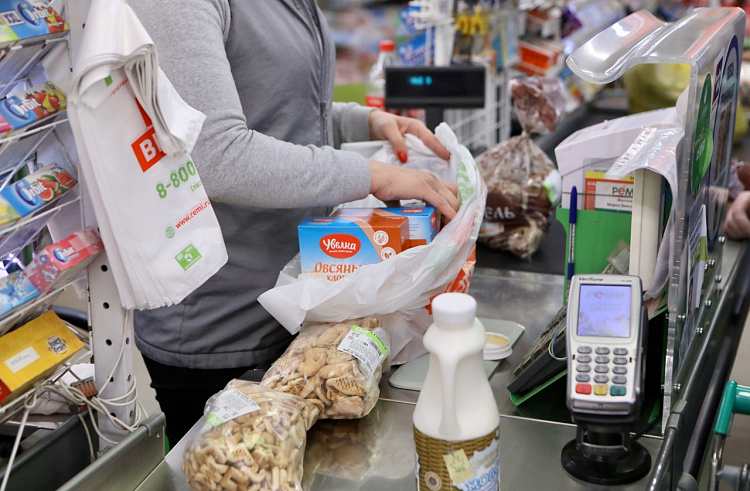 Vladimir Putin declared March 28 to April 5 non-working days. At the same time, retail chains throughout the country have been recording an exuberant demand for a number of essential goods since the beginning of March. According to Viktor Yevtukhov, Deputy Head of the Ministry of Industry and Trade of Russia, retailers have formed stocks of socially important goods for an average of eight weeks, so a shortage of products is not expected.

According to a Nielsen study, amid the spread of COVID-19, sales dynamics in Russia's largest retail chains in the second week of March accelerated by more than one and a half times compared to the previous week. Sales during the days of the most active preparations for quarantine were the highest among all the weeks of 2020.

“Demand increased by 13,8% compared to the previous year by 8,3% in physical terms (2020% a week earlier) with an average growth of 8,3% in XNUMX, from which we can conclude that more than a third of the increase is due to coronavirus, ”the study says.

In connection with the acute epidemiological situation, the Ministry of Industry and Trade of the Khabarovsk Territory organized a meeting with representatives of retail chains in the region. During the meeting, the authorities said that in connection with the announcement of the coronavirus pandemic in the region, panic among the population has sharply increased. The situation has led to a rush of demand for certain food groups. So, according to the head of the Ministry of Agriculture of the Khabarovsk Territory, Alexander Shkurin, from March 17 to 20, an increased demand for groceries and essential goods was recorded in the region. However, retailers, together with wholesalers, have successfully coped with the influx of buyers in the region.

“Trading enterprises operate as usual. We did not allow a shortage or unreasonable increase in food prices. We also offer, if possible, to organize a remote method of trading and home delivery. At the same time, the courier should come in a mask and gloves, and all payments should preferably be made by bank transfer, ”the minister said.

According to Marina Afanasyeva, Sales Director of the Samberi retail chain, an increase in sales in the Khabarovsk Territory was indeed observed from March 17 to 22. However, the retailer provided himself with reserves for 60 days in advance, so there was enough for everyone.

“During the period of rush demand, we increased the frequency of deliveries to stores. Then the products were delivered daily. Now deliveries are made every three days. Today we are recording a growth in demand, but already in the segment of e-commerce, where sales have already grown fivefold. In general, we expect a second wave of rush demand in connection with quarantine measures. Most likely, the Internet direction will be more in demand, ”said Marina Afanasyeva.
Vetta Volgusheva, head of the advertising and PR department of Sambury hypermarket chain, said that the retailer’s online store is in test mode.

“We are actively working to fully ensure the delivery of goods on all requests day to day. So far, we are establishing business processes, ”said Vetta Volgusheva.
She also added that last week there was an increased demand in Primorye and Khabarovsk Territory, comparable to about New Year's purchases. However, not all retail chains are ready to switch to online sales. Elena Aleshkina, Marketing Director of the Fresh 25 Primorsky retail chain, said that the retailer is not ready for this, but there is enough assortment and goods in retail.

“The management has already held meetings on quarantine measures and appropriate measures have been taken. Such a situation is certainly the first time, but we are ready for it, ”- explained the representative of the network. - We prepare stocks in accordance with the dynamics of sales, which is now increased. Buyers do not empty shelves of goods, but demand has increased for socially important goods and products of long-term storage. "

The owner of the Remi retail chain Dmitry Suleev also confirmed the increased excitement in retail in the Primorsky Territory. According to him, last week, demand increased about one and a half times.

“Of course, we have reserves, however, without excess. We see no reason to fill warehouses with goods to failure, because distributors cope with deliveries. In general, we prepared for the current situation, ”said Dmitry Suleev.

The founder of "Remi" also reported on the rush demand for products in the Sakhalin region. There he turned out to be more tangible than in Primorye.

“On Sakhalin, our demand has approximately doubled. This is easily explained, since the population of the island was primarily stocked up with essential goods. The level of wages on the island is quite high; there are very few economy-format retail chains there. Therefore, the buyers went to the shops, ”commented Dmitry Suleev.

Buyers also say that retail chains are not ready for a quick transition to online sales. Quarantined Khabarovsk resident Lyudmila Bakhromeeva tested the ability of local retailers to move to such a segment.

“We rested in Bali, from where we returned to Khabarovsk in transit through Seoul, and upon arrival we were immediately sent to quarantine. So, being at home all the time we were faced with problems of delivery of food and medicine in the city. They wanted to order products on the Samberi network, but they told us that the products would be delivered to their homes only after four days. Therefore, we decided to abandon this venture, and we bought everything at a convenience store, ”said Lyudmila Bakhromeeva.

According to her observations, there was indeed an increased excitement in grocery stores in the city, people were sorting buckwheat and toilet paper, but there was no panic about the spread of coronavirus among the townspeople.

The situation that is now prevailing in retail trade is ambiguous. So says the head of the direction "Finance and Economics" of the Institute for Contemporary Development Nikita Maslennikov.

“The rush demand, of course, can hold retail for a while. Thus, sales will be stimulated and revenue will be increased. Then there will be a sharp decline in consumption, because buyers managed to stock up on everything they need, ”the expert explained.

According to him, many experienced businessmen understand that such a situation will last for more than one week and make reserves based on the situation. Unrealized goods will only deteriorate and this will entail losses: inventories must be created in quantities as justified in the medium term.

“For the economy of the Far Eastern Federal District, this is, to some extent, useful. However, one should not forget that such a purely momentary effect will give trade a temporary boost, followed by a recession, ”the economist concluded.
Tags: coronavirus COVID-19 food retailers Far East