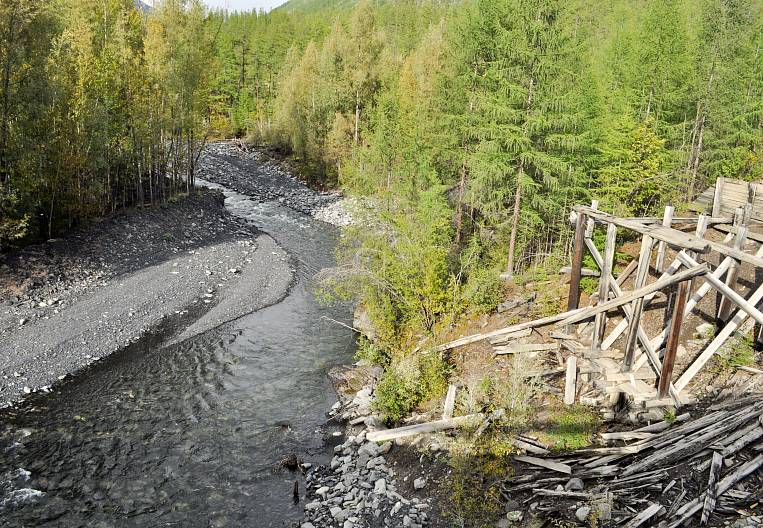 Transport constraints hamper the development of tourism in the Magadan region.

Magadan region in its own unique region of Russia. Although it does not compare with the resorts of the Black Sea coast and it does not possess the historical sights of Europe or the exotic Asian countries, but it has a great tourist potential.

Negative role in the formation of the idea of ​​the Kolyma played a history of development of this region, associated with repression, the Gulag. Over the past few years, the region's authorities and the public are working to create a new image of the Magadan region. First of all, this is connected with attracting investments to the region aimed at raising production (geological study of the Primagadanskiy shelf, development of large deposits of gold and associated metals, construction of a plant for the production of liquefied hydrogen), which will undoubtedly produce a multiplier effect: And road infrastructure, services and tourism.

The main attraction of the Magadan Region is its unique nature. According to the Minister of Culture, Sports and Tourism of the Magadan Region Lyudmila Gorlacheva, Kolyma is the richest in natural and recreational resources region with great potential in terms of outdoor activities (winter and summer tourist routes in the wild, diving, including ice diving, hunting and fishing), cultural recreation (visiting historical monuments, acquaintance with the life and traditions of indigenous peoples), as well as health tourism.

“The tourist potential of the Magadan Region is based mainly on rich natural resources,” said L. Gorlacheva. - On the one hand, it should be noted a fairly wide range of areas that can potentially develop in the region. On the other hand, we must admit that all of them require serious investments, since today the tourist infrastructure is designed for absolutely different volumes of tourists and for a different level of service provision.

The tourist market of the Magadan region is in its infancy. According to official statistics, in the field of inbound tourism, the region is visited by about 1300 people, of whom about 900 are foreigners (according to data for 2013 a year). The real flow of tourists who organized the trip to the Magadan region on their own, without contacting travel agencies, may be more. With such relatively low absolute figures of the number of tourists, even a slight increase in their number has a serious impact on the statistics on the dynamics of development of inbound tourism. The cost of travel vouchers to Magadan and the Magadan region in connection with the specifics of the tourist product is quite high, so there is no need to talk about mass inbound tourism to the Magadan region. However, with a reasonable approach to the development of infrastructure, the volume of inbound tourism can be increased several times, making it a serious source of income for the regional budget. According to 2013 data for the year, 5 tour operators and 12 travel agencies (54 tourism specialist) operate in the region, which offer 19 tourist-generated tourism products in the region to tourists. The tourists are provided with 24 collective accommodation facilities (hotels), the number of hotel rooms is 9333,3 sq.m. and consists of 1110 places, as well as 10 specialized accommodation facilities (motels, rest homes).

From the point of view of inbound tourism for the residents of Russia and foreign countries, the most attractive are such areas of tourism as ecological, ethnic, historical, as well as fishing and hunting.

On the territory of the Magadan Region there are several reserves - first of all "Magadansky", consisting of Kava-Cholomdzhinsky, Seimchan, Olsky and Yamsky sites. On the grassy slopes of the southern coast of the Koni peninsula are 3 large settlements of axes. In total, the list of birds includes the 173 species. Bird's bazaars of Yamskie Islands are the largest in the Sea of ​​Okhotsk.

One of the most beautiful and exotic lakes of the Far East is Lake Jack London, located in the mountains of Annachag, Magadan region, stretching for 10 km and surrounded by mountain deciduous slopes.

Among the monuments of archeology and history, one can single out the ancient Koriak settlements of Atargon, Varganchik, Orochan, and also the legacy of the Soviet era - the camps "Canyon", "Butygichag", "Severny" with surviving barracks and observation towers.

The objects of cognitive tourism are the museum of the singer and composer Vadim Kozin, opened in 1995 in his former apartment-salon, as well as the Mask of Sorrow monument (author Ernst Neizvestny), which was opened on 12 June 1996 year at the foot of the Krutaya hill, where once Was located the infamous "Transit" - the beginning of an endless path through the thousands of prisoners of the Kolyma camps.

The trophy hunting for a large animal - a bighorn sheep, a brown bear, and a giant moose has recently been actively developed. Tourists are accommodated in stationary and temporary campgrounds and log houses. The main hunting seasons fall in the spring and autumn. Travel companies provide a full range of necessary services for the preparation of visa and permits for the client; transportation to base and intermediate camps, including helicopter flights; service by conductors, translators, cooks, workers. Organized multi-day trips, rafting on rivers. Tourist routes pass in several regions of the region, untouched by modern civilization. The purity of water in local rivers is almost in line with international quality standards.

One of the hard-to-reach and at the same time attractive areas is the Severo-Evenk, which has only an air regular communication with the regional center.

"Our region is very attractive for tourism development and has great potential for fans of ethnography, geology, rafting and fishing," said the head of the Severo-Evenk region, Viktor Prokazin. - Already today, rafting along the rivers Omolon, Nayakhan and Gizhig is carried out, in addition to this there are about 5 thousand lakes in the region, almost half of them are fish. Here there are healing hot keys - tawatum, nayahanskiy, wide. This winter, a group of skiers carried out the transition from Nayakhan to Tavatuma and was delighted. In the future, I hope, the nearest, the creation of an ethnographic village on the territory of the region. Of course, transport isolation plays a deterrent role in the development of tourism, but the solution to this problem is being worked out. So, in order to somewhat reduce the transport limitations within the area, the issue of shipping along the coast is being considered. That is a small barge SP-45 twice a week will walk between the Even, Gizhiga and Topolovka, carrying both cargo and passengers. In winter, the winter road is traditionally used for transport security. "

The head of the department for youth, culture and sports of the district administration Antonina Klyuyeva shared with her about the tourist potential of another one of the remote regions of the region bordering the Sakha Republic (Yakutia) - Susumansky.

“Recently, a local tourist group led by Nikolai Ponomarenko’s Susumansky Sports Complex returned from a trip,” she said. - The group passed from the river Burkandy to the lake Malyk. But guests from other regions of Russia and abroad are also frequent in our area. This is facilitated by the fact that the federal road “Kolyma” passes through the area, along which autotourists often run. In general, I believe that the district is quite attractive for the development of tourism. Here are monuments of the history of the development of the region, and natural sights such as Mount Morgihot, Omulevka River. There is a monument installed at the site of the crash of the aircraft, the crew of Captain Kovylin. This is the story of ALSIB. The district has potential, but, in my opinion, this requires not only investment, but the ability to present “goods as a face”, that is, specialists who are passionate about history and tourism are needed. ”

I must say, even a trip to FAD "Kolyma" is extreme. A case of a tourist from Romania, whose motorcycle broke in the Susuman district near the border with Yakutia, received wide publicity. To the nearest settlement is about 130 km, because of forest fires there was a constant migration of animals, including bears. Using GPS, he sent his coordinates to the Rescue Service and broke a small camp, hoping that help would come in a few days. However, less than a day after the signal for assistance was provided, a single tourist was discovered by a group of Kolyma rescuers.

Recently, the objects of attention of tourists are "dead" settlements. In the Susuman district, this is Kadykchan. Of course, in order to visit this village, it is necessary to overcome no one hundred kilometers, and yet it is more accessible than, say, the village of Iultin (Chukotka Autonomous District).

As already mentioned above, several tour operators and travel agencies operate on the territory of the region. One of the companies that deals with the organization of inbound, outbound and local tourism is LLC MAGTUR. In the direction of inbound tourism, the company organizes fishing and environmental tours.

Tourism in the Magadan region is actively developing, connected with hunting, - answered the question of EastRussia.ru about who and why today she is going to Kolyma from other regions of Russia and countries, the director of LLC "MAGTUR" Valentina Kurash. - The organization of this type of tourism involved about five companies. Frequent tourists on the Kolyma are the Germans, the British, the inhabitants of the Scandinavian countries. Speaking directly about our company, for example, last year our tours were designed by residents of the Omsk region, the regions of the European part of Russia, Ukrainians, Englishmen. This year there is an application from tourists from Turkey. "

According to V.Kurash, the Kolyma people themselves choose the direction depending on the time of the year. In winter, as a rule, they go on vacation to Vietnam and Thailand, and in summer the biggest stream goes to Bulgaria, Turkey, Greece. But do not forget that part of the population of the Magadan region goes to the "mainland" to see their relatives.

Obviously, fishing and hunting, which are the hallmark of Magadan, are uncompetitive products in terms of inbound tourism. As the Minister of Culture of Sports and Tourism of the Magadan Region L. Gorlacheva said, the tourist industry of the territory has no established positioning, which can be considered as a favorable starting condition for a systematic and competent approach to its development when a strong organizing principle appears in the person of the state or large business.