Sakhalin Region 15:28 The state of emergency was introduced due to the collapse of a section of the route on Sakhalin
15:01 The doctor named the distinctive symptoms of the omicron strain
Khabarovsk Krai 13:35 A resident of Khabarovsk was sent to a colony for the sale of fictitious tour packages
12:20 Suppliers reported an increase in prices for red caviar
Amur Region 11:12 Mobile vaccination points reopen in Blagoveshchensk 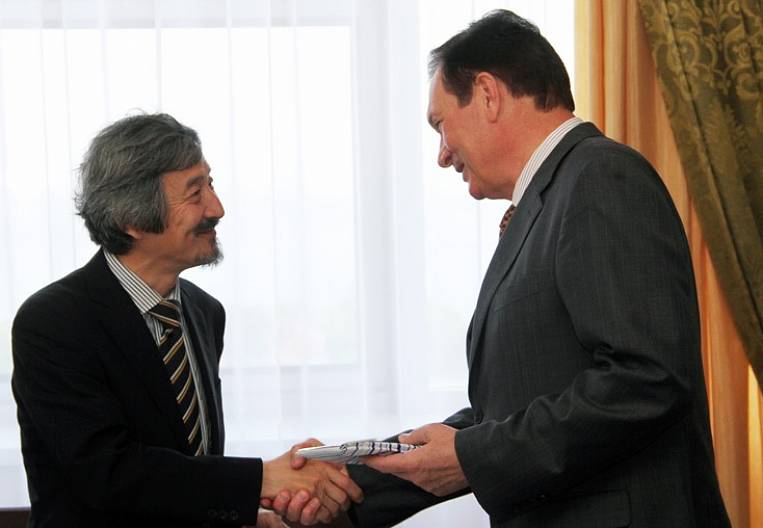 Last week, Japanese scientists got acquainted with the achievements of biotechnologists at the School of Biomedicine at the Far Eastern Federal University and discussed the implementation of the joint project.

Scientists from Nihon University (Japan) visited the campus of the Far Eastern Federal University. The main purpose of the visit of Professor Juro Hiromi and Associate Professor Yashiyoshi Torii is to discuss the implementation of the joint project "Kelp Project" on the use of brown algae in the production of new food products. On the Russian side, scientists from the School of Biomedicine and the School of Natural Sciences of the Far Eastern Federal University, as well as the Institute of Marine Biology of the Far Eastern Branch of the Russian Academy of Sciences are participating in the project.

"This is a long-term project" Kelp Project ", designed for 9 years - three stages, each for three years. The Japanese were interested in our scientific developments, and they themselves came out to us through the consul and offered to sponsor these developments, "- the professor, deputy director of the School of Biomedicine of the Far Eastern Federal University, head of the department of biotechnology and functional nutrition, shared with EastRussia.ru Tatyana Kalenik.

Representatives of the University of Nihon met with Vice-Rector for International Relations of the FEFU Vladimir Kurilov. He stressed that the university expects a positive result from combining the experience of Russian and Japanese scientists who have already achieved good results in the use of algae in food.

Presentation of achievements of biotechnologists of the School of Biomedicine was held in FEFU. On the basis of the Laboratory of Biotechnology of Nutrient Substances and BAS, a tasting of innovative food products with the use of brown algae, marine hydrobionts, Russian wild plants and marine BAS was held. Salads from marine hydrobionts with laminaria, sausages with addition of jellyfish, bakery products, dairy sausages, meat pates, sauces and desserts with additives from brown algae, cucumber and laminaria have already been developed in FEFU.

“Algae we have been doing for a long time. When the TSEU (Pacific State University of Economics) existed, with the Institute of Food Technologies we made many products from kelp, ranging from breads to pastries, in particular, we cooked kelp jam, baked goods, laid kelp in various emulsion systems, prepared mayonnaise or low-calorie sauces, ”T. Kalenik said.

She shared that the interest in kelp has arisen because it contains a lot of soluble fiber in the form of alginates - polysaccharides that are very beneficial to health. These alginates have good water-binding properties and form gels, so they can stabilize food systems (which is important for production). They strengthen the immune system and are known for their antimicrobial and antifungal properties. Due to their adsorbing properties, they cleanse the body, retaining various toxic elements - heavy metals (lead, cadmium, arsenic, mercury) and water-soluble poisons (for example, cyanides). Kelp has a large list of useful qualities that have been studied by Far Eastern scientists for a long time; nevertheless, the useful list continues to grow.

With the addition of seaweed, the FEFU has learned to make even desserts. «Yes, this is really exotic, because no one produces anything like that. Firstly, we make toppings: cranberry-pear, cowberry-apple and from oranges and dried apricots. When making bakery products, there is such a problem - the leakage of stuffing from pies. Alginates from algae have a gel-forming and stabilizing effect, so that the filling is well kept inside. In Croatia, our graduate student received a diploma for the best product, when she presented her low-calorie (unlike, for example, creams and condensed milk) fillings from natural products, "T. Kalenik said.

In addition, FFU created chocolate sweets with marzipan, which also used algae. This development will be introduced into the production of the Primorsky confectioner. In the famous seafood sweets "Bird's Milk" the recipe contains Agar-Agar - a product from seaweed, which gives them an amazingly delicate taste that distinguishes them from analogues throughout Russia.

FEFU actively cooperates with the Nikolsk food production association, which is located in the city of Ussuriysk, where the idea of ​​using algae was received positively. Now the company is making a line of sausages (sausages) using seaweed. “We did not turn sea kale into powder, but used its whole pieces, they are visible on the cut of products. Natalya Mikheeva, the company's chief technologist, is currently making the standard of the enterprise and in the near future they will introduce them into production. Twice already passed tastings, where sausages have received only positive reviews. Do not forget that adding seaweed reduces the cost of food (sausages) by about 15-30%, ”said T.Kalenik.

In September, the staff of the University of Nihon will again come to FEFU. The Sea Cabbage Festival is planned. In 2015, FEFU employees will pay a return visit to Nihon University to agree on joint scientific publications, as well as to establish production of their products in Primorsky Krai, and ours to enter the Japanese market.

"By the way, at the last meeting the Japanese told that they mainly use algae from the USA. Therefore, they were pleased to learn that in Primorsky Krai algae are cultivated, and they can be purchased much closer ", - said T. Kalenik.