Khabarovsk street of the acting governor did not wait

On the evening of July 21, on the 11th day of the protest actions in Khabarovsk, the slogans and chants of the participants of the unauthorized rallies in front of the regional government building finally changed. The reason for this was given by the President of the country Vladimir Putin, although not exactly what the protesters expected from him. 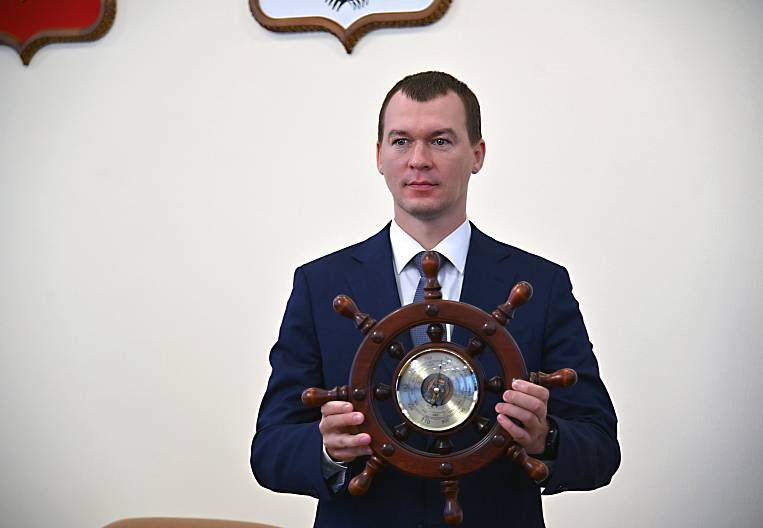 Photo: Vyacheslav Reutov, press service of the government of the Khabarovsk Territory

People demanded to release from custody the governor Sergei Furgal, who was detained on July 9, accused of organizing the murders of entrepreneurs, and to try him in Khabarovsk. The head of state, after a pause, answered in an original way: Furgala dismissed Furgala due to the loss of confidence, and instead of him, the acting governor of the Khabarovsk Territory appointed a young and ambitious State Duma deputy from the Liberal Democratic Party of Russia Mikhail Degtyarev - a person who had previously been in Khabarovsk, but had nothing to do with him.

"Degtyarev, come out!" - people immediately orientated themselves. Didn't help - didn't come out. And he even explained the same evening, having gathered some media for a briefing, why. The cries of the outraged people do not reach the governor's office, since the windows overlook the courtyard, not the square. But when the acting governor went into the reception room, he caught the voice of the people.

“Yes, I’ll go out with pleasure, to be honest, and more than once. But there is a schedule, there is authority, there are priority tasks, so I thought it was not the time. We will communicate with the people: in social networks, via video conferencing and in person. Well, to those who chanted "Degtyarev, come out," I want to say: let's take care of each other. I looked out the window, the social distance there, of course, could not be maintained, ”said the acting governor.

At first glance, the president and his administration, appointing the acting head of the region, Mikhail Degtyarev, followed Vladimir Zhirinovsky's lead. After all, it was the leader of the Liberal Democratic Party who publicly proposed him as one of three candidates for governors from the party, and the region is considered given over to the Liberal Democrats. At the same time, the president elegantly framed both Zhirinovsky and his party under the wave of popular anger, as it becomes clear after a few seconds of reflection: to assume that angry Khabarovsk residents will gladly accept a "Varangian" from Moscow, no matter what party he sympathizes with, instead of "People's" Furgal, it would be stupid. However, not everything is as obvious as it seems.

Mikhail Degtyarev does not have a Far Eastern and does not at all have a managerial biography, although he is from a respectable Samara family and was included in the presidential personnel reserve three times. His initiatives from the time of promoting his own name in the State Duma and his first participation in the campaign for the election of the mayor of Moscow in 2013 are strange, to say the least: here you have a proposal to ban donating blood to people of non-traditional sexual orientation, and an initiative to stop the exchange of dollars, and a replacement anthem to the pre-revolutionary "God Save the Tsar."

Khabarovsk has known many scandalous young politicians in its political history: such a controversial figure was once the deputy of the City Duma Dmitry Kovalchuk, and later his colleague Yevgeny Smolkin. But for the governor ...

Thanks to social networks, Khabarovsk residents got acquainted with the full list of proposals of Deputy Degtyarev while he was still flying to the region from Moscow - after Vladimir Putin's parting words. If the situation in Khabarovsk was standard for Russian regions, they would have expected the first appointments and press conferences from the acting governor, no more. But the Khabarovsk case was conducive to a slightly different development of events: after all, the inhabitants of the region by the time of the arrival of the interim official had not left the state of daily unauthorized protests. The fact that Mikhail Degtyarev never came out to them on his first working day transformed the slogan “Degtyarev, come out” into “Degtyarev, go away”.

Oddly enough, Mikhail Degtyarev has neither benefits nor problems from this. Having devoted half an hour to journalists on his first day in the region, he actually said a lot. He calls his predecessor Sergei Furgal only by his first name and patronymic, and he will not encroach on his team, at least not yet.

“Based on the party affiliation, the conclusion follows: the team of Sergei Ivanovich Furgal, works rhythmically, and we talked with many, she has every right to continue to work. Nobody retires with us until further notice, questions or circumstances. Everyone is working on the spot, ”Mikhail Degtyarev said.

He also added that if perturbations do occur, they will be made on a professional basis.

“If a Khabarovsk citizen, intelligent, for God's sake, we will consider. There is a good one with experience in other regions - for God's sake. There are those who work in federal bodies, but with Khabarovsk roots - we will consider if vacancies are formed. There will be no revolutions, no demolition of leaders, because stability is people. Officials are people who provide management, ”added the acting governor.

The Khabarovsk protesters, whom Mikhail Degtyarev saw from the window, and then, getting into an official SUV on the way home, do not arouse the Acting Governor's desire to talk, but rather recommendations to protect themselves from the coronavirus. And here for Mikhail Degtyarev lies the most important danger: not yet having a political reputation, he may not at all earn points among ordinary Khabarovsk residents, ignoring the supporters of Sergei Furgal. Even if the street does not have a pronounced leader, it can be distinguished, and it is already possible to conduct a dialogue with him. Whether Mikhail Degtyarev understood this will become clear very soon.

“I honestly don’t know whether some folk festivities or spontaneous gatherings of citizens have an impact on the issue of the detention of Sergei Ivanovich, which is painful for the Khabarovsk residents. This is what experts will say. But what I see: social distance is not observed, - the interim governor transparently hinted to the Khabarovsk residents. - To be honest, I plan to work for everyone, because the people have completely different points of view - they have different attitudes towards the issue of management, and the issue of management, and about detention. People are different. I respect everyone. "

And, of course, he is not going to compete with Sergei Furgal, if he is found innocent: for what happened to his colleague in the State Duma, he is "personally hurt", and he "sincerely wishes the most disgraced head of the region". But does the Russian judicial system allow such misfires?

The incredible scenario with the release of the ex-governor, however, is no longer seriously considered. But the field for a legitimate political struggle with the interim governor opens up a wide field. If you do not take into account other flaws in his biography, which show the typical deficit of real achievements for a deputy, then the main flaw, of course, cannot be corrected. Mikhail Degtyarev, no matter how he calls himself a native of the small city of Samara, who has lived outside Moscow for 30 years, is still a Muscovite and Moscow's chosen one. The same capital, on the dislike of the politics of which Sergei Furgal shot in 2018, and a year later - the deputies from the Liberal Democratic Party of Russia received the majority of mandates in all elections in the Khabarovsk Territory.

All opponents of Mikhail Degtyarev, of whom there have already been thousands among ordinary users of social networks, will certainly hit this sore point, and how many more will be found in the ranks of the bureaucracy and public politicians of a regional scale, one can only guess. All parliamentary parties, of course, have already announced their intention to cooperate with the acting governor. But whether they thirst for his blood closer to the fall of 2021 will depend primarily on Mikhail Degtyarev himself. He has already outlined his priority: this is the economy.

“In addition, I am very worried about the investment program, that is, everything that the regional government plans to invest in development in 2021 and further. This is the construction of roads, housing, infrastructure, and everything else. I have an idea, I will voice it one of these days. But I believe that public discussion of such projects is necessary. There is an architecture of power, it is understandable: the government headed by the interim, parliament. But what to build and where, and if even along the lines of national projects, a comfortable environment, people must decide - authoritative people. Therefore, here we will rely on additional institutions: on the public chamber, perhaps we will create some kind of council under the governor. In general, this topic worries me very much, ”Degtyarev admitted.

The first words of the acting governor do not give an unambiguous answer to the question that torments politically active Khabarovsk residents: will the official help to change the policy of the federal center? At first glance, he has no leverage for this - neither the presidential envoy to the Far Eastern Federal District, Yuri Trutnev, nor other political heavyweights, except for the leader of the Liberal Democratic Party of Russia Vladimir Zhirinovsky, have shown much interest in the fate of Mikhail Degtyarev and the Khabarovsk Territory. The most unpleasant thing in this situation is that it can drag on for another year, and then radically change, because Degtyarev himself does not hide the fact that it is premature to think about elections, and Russia's political practice allows the removal of the acting governor who failed to become popular to replace them with other figures ...

To avoid such a situation, Mikhail Degtyarev still has time. But whether the residents of the Khabarovsk Territory have it is up to them to decide.