We are visited by the auditor 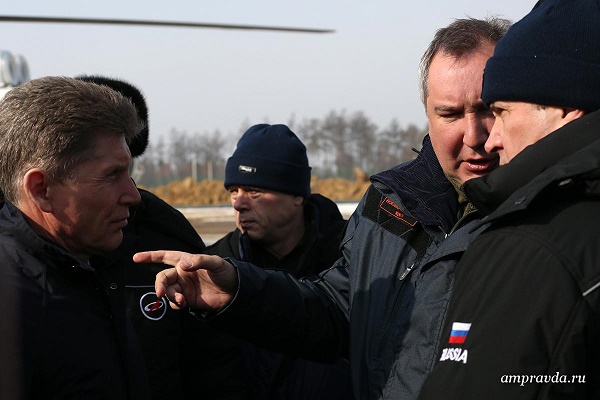 Deputy Prime Minister Dmitry Rogozin once again visited the main Far Eastern construction site. There are no fewer questions on the organization of work - the human factor is the basis of most problems.

A lot of booths, where red and blue are lagging behind the schedule, and people checking a distant and important object in the wilds of Amur forests - the vice-premier’s next visit to the Vostochny space center again began with reports, reconciliation of funding and plans. Despite the implacable statistics, the changes are obvious: the number of workers has increased since the end of February and the amount of work done has increased.

Now the main builders' forces are thrown on the creation of a force floor of the assembly and test complex of the launch vehicle (MIK PH): workers drill piles to a depth of 8 meters - a mark below the ground freezing level. This is necessary in order to withstand a cart with a rocket, the load on each wheel set of which will be more than 40 tons.

The work performed is a spoonful of honey in a barrel of ointment: both TsENKI and Roskosmos are still unhappy.

“We are faced with the fact that, following temporary schemes for the installation of equipment, we cannot guarantee its physical safety and proper condition due to the cleanliness of the premises and what is happening there,” Igor Komarov, head of Roscosmos, told Rogozin. “In addition, by compressing the installation time of equipment, we deprive ourselves of time for its revision and debugging.”

As it turned out, the builders themselves can become hostage to the work of a clumsy bureaucratic system. On other objects, the fact that some problems are still coming from the designers has surfaced again.

“We still have a number of premises for which the construction detailed documentation does not always correspond to the structures. Such changes to the documentation came after we concreted the structures, - explained the first deputy director of Spetsstroy Alexander Mordovets to Rogozin. “As a result, we can hand them over for installation of equipment only by March 30th.”

Sometimes the weather comes into play. “We need to drill piles - well, I'll drill into the frozen ground, and then they will float,” Mordovets continues, “what's the use of this work? And it takes time to warm up - hence the discrepancies with the schedule. "

Later it turned out that on the main and, as one would like to believe initially, illustrative construction, there is a place for the heroes of Krylov's fable about the swan, cancer and pike: at the most problematic site (the city of Tsiolkovsky) there are no obstacles in the construction plan.

“Our supplier“ flew off ”- at the time of the initial tenders, the plant for the production of electrical cables was working quite well, and after 2 years it went into bankruptcy, - explains the representative of the Spetsstroytechnologii company. “We found understanding with the customer, we want to order it at another enterprise, we have already agreed, and the designer again asks to redesign all the issues.”

“We have sent two solutions for cable products to the customer's name - we have not received an answer yet,” was the reply of the chief engineer of the project.

Or here's another: “We just thought, what if the rebar is not knitted with wire by 0,7, but by 0,8, then it will be possible to save both labor resources (less often you will have to knit) and materials. They wrote to the designer - they did not answer us ... "

“In my opinion, it is not at all the level of the deputy chairman or director of Spetsstroy to decide which wire to knit the armature or which cable to lead where,” Rogozin retorted, barely holding back his sarcasm. - There is only one conclusion: you have no communication on this object. So you don't interact at all. From now on, if you don’t understand, representatives of the design institute must be constantly present here, who for some reason came here from time to time, and I personally entrust control over Tsiolkovsky to Alexander Volosov. ”

Work is in full swing

Despite all the shortcomings, the Vice Prime Minister noted that there are advantages on the East: for example, the government's instruction to create the headquarters of the launch site was fulfilled, and he immediately began to work effectively.

“Today, as never before, maximum coordination of all participants in the process is important. For this, the headquarters of the Spetsstroy of Russia was created, the heads of the central office, all the management of the enterprises subordinate to the Spetsstroy were called to make all the necessary managerial decisions here, on the spot, ”explains Maxim Kryukov, deputy chief of the operational headquarters of Spetsstroy of Russia for the construction of the Vostochny cosmodrome.

In round-the-clock mode, operational duty officers solve any issues arising at the construction site. For two weeks, worked more than a thousand calls. After all, the process of building the spaceport goes to the finish line.

“There are constant calls - over a hundred per day. For example, somewhere you need to help with a car, with a crane, we respond promptly, transfer information to the right authorities, ”says the operational duty officer of the Russian Spetsstroy headquarters, Aleksey Udovenko.

In addition, the process of coordinating the executive documentation with the customer has accelerated, the finished premises are more quickly transferred for the installation of equipment. Despite the fact that about a quarter of the work remained from the necessary, Rogozin expressed confidence that they will be completed on time. It is necessary to establish the coordination of all structures so that the 12 largest facilities of the so-called "start-up minimum" are commissioned on time. Due to the criticality of the moment, Rogozin said, the time has come for even stricter control measures. This should be facilitated not only by “personal responsibility measures”, but also by a ruble incentive. More precisely, its withdrawal for the day of delay.

“Firstly, I have put forward a demand to concentrate here, on Vostochny, all the human and financial resources of Spetsstroy in order to prevent delays in schedules,” the Deputy Prime Minister of Russia said after a closed meeting. - Secondly, we plan to additionally consider measures of personal and financial responsibility of Spetsstroy for each day of the construction failure. These proposals will be presented to the Prime Minister and the President of the country ”.

Tomorrow on the East will be held the college of Spetsstroy, where detailed reports of all departments of the federal construction agency will be heard, schedules re-drawn up and instructions given. Of the important thing - the leaders of all spetsstroevsky Glaucks will gather at it, who will submit to Alexander Volosov proposals on states that they can allocate for work on space construction. The quality of work of the board Dmitry Rogozin promised to evaluate soon - 3 of April.