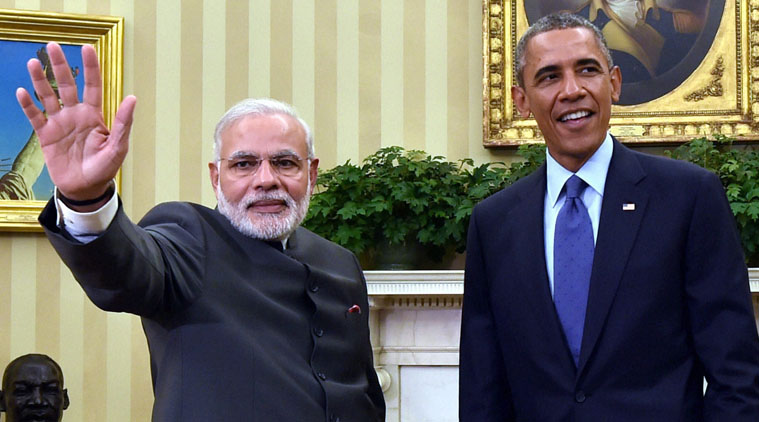 Democracy has not figured among the foreign policy priorities of the Barack Obama administration. He came to power promising to withdraw troops from Afghanistan and Iraq, so as not to try to remake them into the likeness of the United States. The Arab Spring turned into a nightmare, with Obama being forced to support the security forces in Cairo and Riyadh.

Periodically, relations with the autocracies of Moscow, Beijing, Tehran and Havana were favored over relations with American allies. However, during a landmark visit to India in January, Obama changed course, realizing that the convergence of interests and values ​​with the largest democracy in the world makes it key to American strategic goals.

Thus, he repeated the steps of Japanese Prime Minister Shinzo Abe, who predicted back in 2006 that Japan's relations with India could replace Japan's relations with the United States in the role of "the most important bilateral relations in the world," based on common interests and values. In turn, Indian Prime Minister Narendra Modi refers to Washington and Tokyo as India's most important foreign partners.

Both Japan and India have recently begun to pay more attention to democratic neighbors in South and Southeast Asia. Abe and Modi pursue a type of diplomacy based on shared values, which Obama had previously disdained. However, all three leaders recognize that non-sentimental national interests and divided political ideals require closer strategic cooperation in order to influence the next century of development of the Pacific region.

From very different backgrounds, Obama, Abe and Modi are close on one thing - the idea of ​​an India-Pacific alliance that will contain China's growth and keep Asia at peace. This is a serious challenge to Beijing's confidence in its own dominance in the region and to its attempts to forge a "new type of great power relationship" with the United States over the heads of its allies.

In response to Chinese pressure on the balance of power in Asia, Japan, India and the United States established a tripartite structure in the second half of 2011. Now they have agreed that it is necessary to strengthen trilateral strategic cooperation, primarily in the area of ​​coastal defense. The three leaders also discussed rebuilding the Quadripartite Strategic Cooperation with Australia, whose Prime Minister, Tony Abbott, supported the idea, despite the fact that his predecessor, Kevin Rudd, destroyed the alliance's prototype as a gift to China.

When the Four conducted some of the largest military exercises in Asia at the time in 2007, Beijing strongly protested, formally condemning all four states and decrying their plans to create what China called an "Asian NATO." And although India was the weakest link in this group, which without it included America and its main Asian allies, China's pressure on Australia and a lack of resilience from the United States led to its collapse.

However, it did not go unnoticed that China's insistence on its neighbors and America increased in the wake of the Four's retreat - instead of appeasing Beijing, it only gave it courage. The recovery of the Quartet in 2015 is a result of how seriously China has grown in recent years, which worries not only the United States and its allies, but also non-members of this bloc, such as India, pushing them to create a safety net in the Pacific region , in the center of which will be the USA

This is a serious turn for India, which historically was quite far from the US allies system and was a third-party observer of the Asian economic miracle because of its autarky policy. But now India is returning to the international arena and its strategic aspirations are expanding with the growing economy.

In 2014, India became the third largest economy in the world in purchasing power parity. The most recent figures show that its economy is growing faster than China's. India's current progress and the slowdown in Chinese economic growth amid political tightening of the screws call into question the assumption that China owns the future. Countries in Asia and the West welcome the rise of India, while fearing China's growing power. Indian democracy is at the forefront of countries that see this situation as full of opportunity, while working together to block the rise of China. In the eyes of Washington, Tokyo and Brussels, India looks like a partner, while China is a strategic rival.

Consequently, Obama and Abe decided to invest in India's success through closer economic, diplomatic, technological and defensive cooperation. Last month in New Delhi, the US president agreed to deepen a "global partnership," which Modi said would contribute to "adding together the characteristics of this century." These words were repeated in the declaration of the Abe-Modi summer summit in September 2014, in which both Asian leaders promised to make defense and economic cooperation closer “in order to create a relationship that will affect the course of both countries, the region as a whole and the whole world in this century. "

These claims imply that Indian and Pacific democracies will not obey the world order that China dictates. Last September, after talks with Abe, during which each of the leaders outlined their concerns about China's assertiveness, Modi publicly denounced Chinese revisionism. While in Tokyo, he noted that "wherever you look, we see the imperial mentality of the eighteenth century: penetration into some countries, penetration into the territorial waters of others, the occupation of others and the seizure of territories." The United States follows the same line of conduct against Beijing's open territorial claims in the South and East China Seas. China's insistence unites the region's most powerful states against it, reinforcing their interest in closer cooperation in order to uphold international law and its norms.

Obama and Modi, like Abe and Modi, outlined a model of the balance of power in Asia, including close cooperation between the main democracies of the region. Looking to the future, we can say that India can become just as important to US security interests as Japan is now; In the same way, Tokyo can build a close partnership with New Delhi, like an alliance with America, in order to cope with threats to peace in the region. Although China’s military and economic power is growing, the combined resources of these three countries are greater and will remain so.

For both the American and Japanese authorities, India is the only country in Asia that is large enough to offset China's power and influence. Its fleet patrols the shipping lanes, which are the world's energy backbone, connecting the oil and gas resources of the Persian Gulf with the major economies of East Asia. India is a historical victim of terrorism and unwittingly shares with the United States and Japan the interests of curbing extremism. As the economy grows, India will have more opportunities to act as a state in charge of international security from East Africa to the Western Pacific region, as well as in the Middle East, which is home to seven million Indian citizens. But to achieve that role, India needs all the capital available, all the technology and weapons it can get; The United States and Japan are among the most likely external suppliers of these resources. They are practically forced to bet on the success of India.

In New Delhi, Modi and Obama committed themselves to closer cooperation in the defense, energy and trade sectors, as well as to jointly counter terrorism. In addition, they pledged to “uphold the common values ​​that have made our countries great” and underlined their commitment to the Universal Declaration of Human Rights. At a previous meeting with Abe, Modi insisted that countries borrow their national power from a common political tradition: “India is a democratic country. Japan is also a democratic country. If India and Japan think about peace together, we can make the world understand the power of democracy. ” Obama's trip to India reminded him of what Abe and Modi had already suggested - that democracy could ultimately be a strategic asset in foreign policy.

Posted by Daniel Twining, Senior Fellow in Asian Studies (German Marshall Foundation). From 2007 to 2009 he worked in the policy planning apparatus of the US Secretary of State.