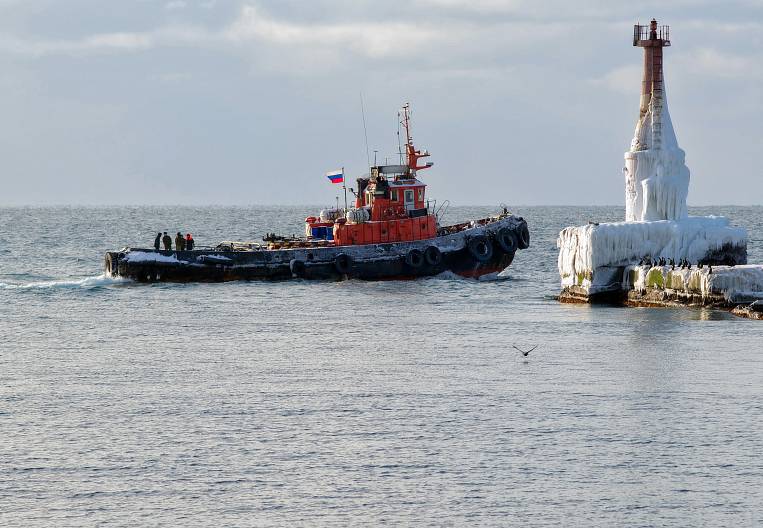 According to the Governor of the Sakhalin Region, Alexander Khoroshavin, today the island region accounts for more than 45% of the total foreign trade turnover of the Far Eastern Federal District (DFO). Correspondent of EastRussia found out what is behind this figure.

Export deliveries of the region in 2013 amounted to $ 16,7 billion and increased by 2,4% compared to the previous year. This impressive level of foreign trade and stable growth rates are provided by minerals - oil, gas and coal. It is not yet necessary to speak about the growth of exports of products of the real sector of the economy - its share in the foreign trade turnover is scanty. This is mainly the sale of fish and seafood on the foreign market.

The region's leaders do not hide this, but they want foreign capital in the extractive sphere to give impetus to the development of other industries.

“We have a 20-year history of success in attracting investments. It is based on agreements with the world giants of the oil and gas industry on the implementation of offshore projects under the general name Sakhalin. During this time, almost $ 47 billion was invested in the regional economy. Our region is a recognized center of oil and gas production in the Russian Far East. We have successfully integrated into the world economy, which has provided the Sakhalin Region with a reputation as a reliable partner in the foreign economic space, ”said Alexander Khoroshavin in mid-March at a meeting of the Investment Council in Yuzhno-Sakhalinsk.

In a conversation with EastRussia correspondent, the press secretary of the Governor of the Sakhalin region, Aleksey Bayandin, said that "thanks to the development of hydrocarbon projects, the budget of the Sakhalin Oblast is now defenseless, we are one of the leaders in the country in terms of budget provision".

Serious money has come to the region, so from this year state programs for the development of the real sector of the economy start to work: agriculture, food processing and timber industry, fishing industry, coal industry. On the support of entrepreneurship in the region will be annually sent from 2 to 3 billion rubles. Primarily in the form of subsidies, provided to recover production costs.

"Our goal is not investment for the sake of investment, not an increase in the volume of foreign trade at the expense of oil and gas, in order to inflate our cheeks and take pride in" indicators "and interest rates," Sergey Karpenko, Minister of Economic Development of the Sakhalin Region, told the reporter. "The money that goes to the region should work for the benefit of its residents, for the development of the island economy."

According to the minister, in the region over the past decades, many problems have accumulated in the segments that shape the quality of life of the population. It is necessary to raise the salaries of state employees, develop energy, education, health, build roads, bring to the mind of housing and communal services ...

Independent expert, political scientist, doctor of political sciences, professor at Pacific State University Ildus Yarullin, discussing the economic and foreign trade successes of the Sakhalin region, is cautious. He believes that a clear result from investments in the regional economy should be the influx of people to Sakhalin - those who come here to live permanently. Rides because it is good, satisfying and comfortable here.

"So far we see the opposite: if we compare migration" balance "and" bulldo ", then there is an outflow of people from the region. They come here mainly to work shifts, who work in the fields, "the political scientist said. - Rich oilmen with good salaries are far from being the whole population of the region. In addition, we sometimes find ourselves hostage to the magic of numbers: multibillion investments, a huge foreign trade turnover ... People seem to get big salaries. But you look at the current Sakhalin prices. The ratio between the real and nominal purchasing power of the population is far from the best ... Oil is itself. No one produces it, it is mined. And if foreign capital leaves? While Americans, British, Japanese are satisfied with the agreement on joint production sharing. And tomorrow? Investments in the region are going on, it's good, but the region's foreign economic activity is still based on selling what is produced by the subsoil, not by people. There is no industry as such, "Yarullin said.

Natalia Frolova, independent expert, associate professor of the department of world economy and customs at the Khabarovsk State Academy of Business and Law, Ph.D. in Economics, believes that without foreign trade (even hydrocarbons), without foreign investments to Russian regions and the Far East, it will be very difficult to live, and says about About the same as the leadership of the Sakhalin region.

“This money must be disposed of with the mind. There are, for example, the experience of Asian countries, which, due to foreign investments, with competent state and regional policies, are well developing their regions. From investments should be social, budget returns. In the end, they should work to diversify the local economy and give a multiplier effect, ”she is sure.

"There are some economists in the Far East and this point of view: we do not need foreign investment, it will be economic dominance up to territorial claims. There is a threat that a foreign investor can impose his rules, dictate his policy to some extent, can go where he needs, and not the region ... This I heard even at the academic council of the Far Eastern Scientific Research Institute of the market, which Conducted research on Sakhalin projects, "Frolova continued. - But, I think, this should not be afraid. The task of the state consists in directing investments in the right direction, dictating to foreign capital, where to invest. I hope that the leadership of the region is following this path. "

In the meantime, there are all the prerequisites that the flow of foreign investment in the Sakhalin Region will grow. As well as foreign trade turnover. And the figure - 45% - with which this article began, will surely grow.

Especially since in January the governor of the region instructed the Ministry of Investments: to submit to the Sakhalin Regional Duma a draft law on "tax holidays" for investors. It will allow zeroing of taxes on profits for new productions. Work on the bill should be completed in April.