Arkady Dvorkovich shared his personal experience in the public service and in development institutions, spoke about the potential of innovative business and measures of state support, summed up the results of a ten-year work of Skolkovo, answered questions. The meetings were held as part of the educational program of the regional phase of the Startup Tour 2020 and as part of the All-Russian ASI program “Mentoring for Communities”, aimed at developing new projects, business initiatives and the emergence of cooperative ties. 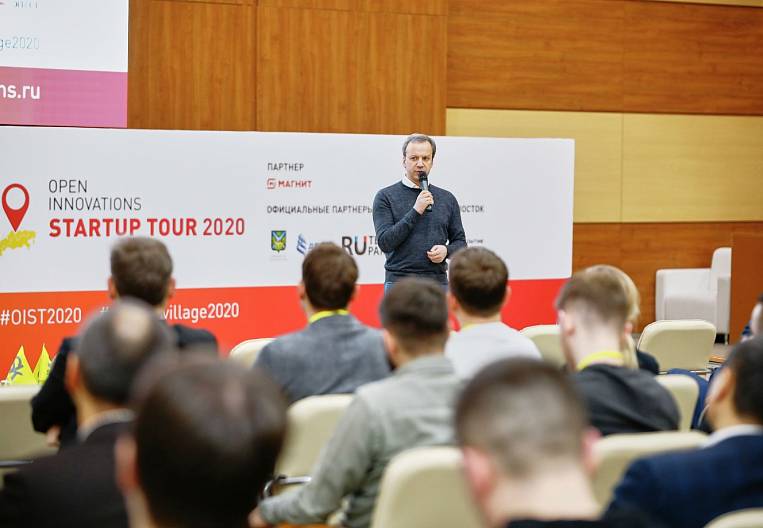 Arkady Dvorkovich, who headed the fund in September 2018, oversaw the innovative direction in the government. As the co-chairman of the Skolkovo Council Vekselberg figuratively put it, he came to the position of “playing coach” to participate not only in the formation of ambitious plans, but also in putting them into practice.

According to Dvorkovich, “in general, Skolkovo is a successful start-up”. More than 500 billion rubles were spent on creating the infrastructure of the innovation center, including about 100 billion rubles of budget funds.

“State investments went exclusively to infrastructure. This made it possible for companies to develop their business, build research and development centers. A new university has been built that works successfully, ”noted Arkady Dvorkovich. - Today in the Skolkovo innovation center there are more than two thousand startups. A significant part of the companies that came in 2014-2015 entered the market and earn tens of millions of dollars in the field of computer security, robotic systems, pharmaceuticals and other areas. About 400 of them are a good indicator! Now a new generation has come, they are in the growth stage, but now we can say: the state’s costs are gradually, step by step, due to tax revenues beginning to return. We plan a noticeable increase by 2025. "

According to him, about 89% of the areas of the first stage are occupied, so the development of Skolkovo continues. In addition to the existing centers of companies (Tatneft, KAMAZ and many others), new ones are being created. According to the head of the fund, "Sberbank is building a huge technology park, it is planned to open several new R&D centers - the Japanese company FANUC and Transmashholding, the opening of the Korean Medical Center and the clinic of the University of Strasbourg."

In collaboration with the Moscow School of Management Skolkovo, the Russian Economic School and the Millhouse group of companies (owned by Roman Abramovich), which owns assets around the technopark, the Bolshoi Skolkovo project is being developed. There, for the comfortable work and life of those who work there, a unified transport infrastructure and a “smart” urban environment are being formed. ”

“We are actively cooperating with the Moscow government: our companies pay taxes to the budget of the capital, and half of the income tax is returned to the Skolkovo budget for new investments. I hope that in other regions a similar mechanism will work over time, ”said Arkady Dvorkovich.

This year, with the participation of the Skolkovo Foundation, many events for innovators will be organized. In particular, after the completion of Startup 2020 in ten Russian cities, on the “birthday” (the charter of the fund was signed on May 21), Skolkovo will host the Startup Village, a large-scale startup conference for technology entrepreneurs in Russia and the CIS countries.

In October, the Open Innovations Forum will be held - a platform for interaction between the government, industrial partners and startups. This will be preceded by a series of competitions organized jointly with other institutes of innovative development.

“This selection of the best teams in the field of information technology, medicine and other fields is being carried out jointly with industrial partners - Rosseti, Russian Railways, Rosatom, and other Russian and foreign companies.”

And in November in Skolkovo for the first time they organize the Nobel week. It is still a secret who will come from the prestigious award winners, but with their participation they will choose the best innovations of this year, and the authors will receive Skolkovo Awards from the hands of Nobel laureates.

The culture of demand for innovative ideas and developments by the state and large business in the country has not yet fully formed, and this is one of the barriers to the development of innovative entrepreneurship.

“In the early 2010s, a mechanism for enforcing innovations worked, which allowed involving about a third of state-owned companies and enterprises in the process. Many of them are already leaders in international markets, and the rest now have to catch up, ”said Dvorkovich.

And yet, the innovation support ecosystem has emerged. These are numerous ASI projects, new educational projects, the international WorldSkills movement, quantoriums and much more. In particular, the Far Eastern Fund for the Development and Implementation of High Technologies, whose founders were the Development Fund for the Far East and the Baikal Region, Rusnano and the Russian Venture Company, have already financed the first companies.

“At first, residents of Skolkovo were attracted by tax and customs incentives and grants, and now services are more and more in demand,” said the head of the Skolkovo Fund. - For example, protection of intellectual property rights: in 2018, 1 patent applications were filed, 500 were received. In 150-2018, the demand for promotion services to international markets increased, and the most popular area is the acceleration and incubation of companies that we provide, like As a rule, together with large industrial partners in Russia and abroad. Those who take advantage are becoming more successful. ”

On January 1, the Skolkovo Extraterritoriality Law entered into force. Now the Russky technology park, created in conjunction with FEFU, is a regional fund operator, which has expanded the integration of two innovative institutions. 75 residents of the technology park are engaged in the development and promotion of high-tech products in the areas of IT-technologies, virtual reality, robotics, environmental construction and biomedicine on the domestic and Asian markets.

Another active partner in the Far Eastern Federal District is the Yakutia Technopark. On the sidelines of Startup 2020 in the capital of Primorye, an agreement was signed between the government of the Sakhalin Region and the Skolkovo Fund to participate in the creation of the innovative Sakh-Link technology park.

Communicating with students in Vladivostok, the head of the fund emphasized that "innovation most often lies in the plane of commercial markets." He noted that not everyone can do business productively.

“On average, 20% of people in the world are able to engage in innovative business, we have about 10%, and the result is only 2-3% of the initiatives. They provide the main growth for the economy, which neither the oil sector nor the gas will provide, ”said Dvorkovich.

At the same time, the success of innovations largely depends on a harmonious team, in which there is a balance on the friendship-professionalism scale, and the openness of the project, including information (for potential participants, clients and partners), on faith in victory. It is important to prepare a brief, high-quality presentation of the project. This is not a guarantee of success for the investor, but a poor presentation can "ruin the chance in a few minutes."

In response to questions from a business audience, the head of the Skolkovo Foundation outlined the trends of innovative development in public administration: technologies for the remote provision of services, big data analysis for managerial decision-making, transport, logistics; Flexible project management system (Agile).

According to him, for the development of innovative business, a combination of three elements is important: support of local authorities, interest in business innovation and universities.

Summing up the discussions, Dvorkovich noted that the Far East may be of interest to the innovative product of the Asia-Pacific region.

“Russian companies are already entering the markets of other countries with information security projects. The second topic is digital solutions for cities, ”said Arkady Vladimirovich. - We are talking about the work of the police, special services, the Ministry of Emergencies, in the management of transport, including road traffic in cities, about other public services, including in health care. This trend has begun and is developing quite actively in large cities, especially in Moscow, which is one of the leaders, and not in Russia, but in the world. You can take these decisions as a base and supplement them with some local solutions, including those being developed in certain regions of our country. ”

He noted that, despite certain difficulties, achievements are already noticeable: five years ago, the word “startup” was unknown to 99% of the population of Russia, and today it does not need to be translated.

“2 startups passing through Skolkovo showed that it is possible to realize ideas, create jobs, earn money and pay taxes. Even skeptics gradually believed in it, ”said Arkady Dvlorkovich.

Skolkovo Foundation is a non-profit organization created on the initiative of the President of the Russian Federation in September 2010. Its goal is to create an ecosystem conducive to the development of entrepreneurship and research in the areas of: energy efficiency and energy saving, nuclear, space, biomedical, strategic computer technologies and software. The fund is entrusted with the management of the Skolkovo innovation center, whose activities are regulated by a special law that provides special economic conditions to startups that have undergone special external technological expertise.

In 2018, the revenue of the participating companies of Skolkovo amounted to almost 92 billion rubles, the total revenue for nine years of the project exceeded 300 billion rubles.