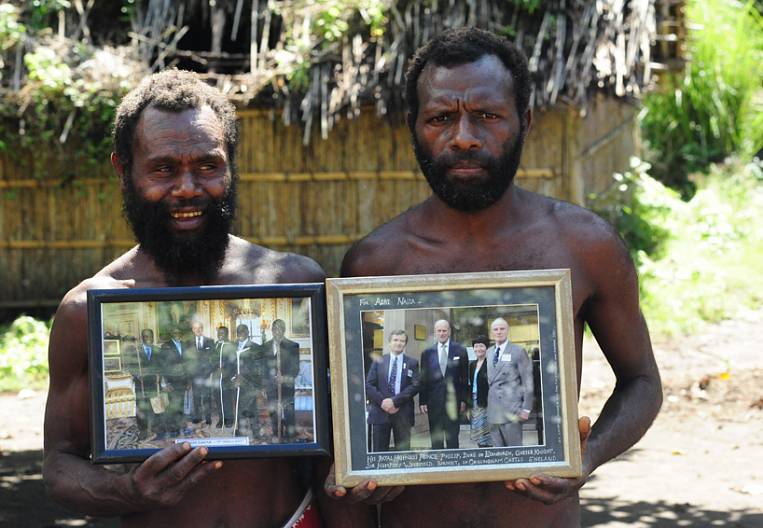 The twentieth century has become a time of unprecedented globalization, and there are practically no places left on the planet where no human has gone before. The meeting of the natives with previously unknown phenomena (among which, alas, there was a war) left a deep mark in their minds, which led to the emergence of a unique and in its own way tragic phenomenon called "cargo cult".

The heyday of these bizarre beliefs came during the Second World War, when on the islands of Melanesia, right in front of the locals who still adhere to the tribal structure, a grandiose battle was unfolding between technologically advanced states. The first wave of supplies poured in with the arrival of the Japanese occupation. As the Japanese began to suffer defeat and retreat, the Allied forces deployed an even larger presence here. Clothing, medicine, canned food, tents, weapons - all this was dropped in large quantities from transport aircraft for the needs of the fighting sides. Such an abundance of different things "from the sky" plunged the natives, who often faced civilization for the first time, into a culture shock, especially since the Americans often shared supplies with local residents who helped the military. At first, this was typical of the Imperial Army, but Tokyo's brutal colonial policy nullified sympathy from the indigenous population of Oceania.

At the same time, pre-war missionaries and colonial officials, who could explain what was happening to the natives, were evacuated at the very beginning of hostilities. And the soldiers of the occupation troops, of course, were not always willing to make contact with local residents.

With the end of the war and the departure of the military from bases and airfields, supplies of supplies also ceased. At this very time among the Melanesians, charismatic "preachers" begin to appear, promising the return of the plentiful "cargo" - food, weapons, Western clothing and equipment. The explanation was simple: supplies are the gifts of ancestors, and in order to receive them, it is necessary to act in the same way that military men behaved in their time. Trying to attract planes and ships from the "Cargo", the natives began to imitate the occupations and even the appearance of American soldiers, arranging a daily "drill" with wooden "guns." The islanders installed wooden "towers", where they sat in "headphones" of bamboo sticks, depicting the work of air traffic controllers. Forest thickets were cut down and leveled, which was intended to depict runways. Cultists sent their "rituals" with stunning detail - in an attempt to attract the attention of "ancestors" even signal lights and illuminated improvised runways were reproduced. But the coveted aircraft did not all appear.

Some went further and created life-size straw copies of the aircraft. The followers of the cult of cargo believed that foreigners have some kind of mystical connection with local spirits and the ancestors of the natives, who were considered the only sufficiently powerful creatures to produce wealth from nowhere.

In the end, of course, the promise of the prophets "cargo" did not return to the natives, and these eccentric currents began to fade. But at the same time, the traditional, thousand-year-old beliefs of the indigenous people in many places in Oceania came to an end. Until now, it is not always possible to determine whether a particular leader was sincere in his convictions or simply abused the trust of the naive population: the cultists, as a rule, went deep into the islands, away from large settlements and the colonial administration. Therefore, reliable information about these "cargo fans" today is very little.

However, there is one belief that, having originated before World War II, did not lose its popularity on a single island. The cult of John Froom originated at the end of the 1930s on one of the islands of the Vanuatu archipelago, then known as the French-British condominium New Hebrides. It is believed that such a transformation has undergone veneration of the god Keraperamuna on the island of Tanna. According to one version, a local resident named Manekhivi under the pseudonym John Frum, dressed in Western clothes, began to preach to the population of the island, promising to those at home, clothing, food and means of transportation.

Others argue that John Frum is an incarnation of Kerapramun, whose appearance was most likely caused by the massive use of the intoxicating decoction of the kava-kava plant. Anyway, the new "prophet" predicted the coming of the "golden age", when all representatives of the white race, including the missionaries, would leave the New Hebrides, and the Melanesians would get all the material blessings enjoyed by Europeans. To this end, the inhabitants of Tanna needed to give up any aspects of European influence (primarily money, education and Christianity) and return to traditional customs, which here in a distorted version of English were called "kastom".

In 1941, the followers of John Frum squandered all their savings and departed from the settled and mission-built places to the interior of the island to send out traditional rituals. Colonial officials began the persecution of the cult, arresting a man who called himself a sect leader, and eventually banished him to another island in the archipelago. It would seem that the days of the current are numbered. But the war broke out in the Pacific, the Anglo-French administration fled, and about three hundred thousand US troops arrived, of course, daily receiving tons of cargo through transport corridors. It was at this time that the John Frum sect began to turn into a classic cargo cult: the adepts built symbolic runways to attract American planes. Many, by the way, believe that the name John Frum comes from the distorted "John From (America)" - "John of (America)".

The cult eventually began to play a serious role in the life of the island: the leader of the Nakomakh movement in 1957 created the "Army of Tanna", whose "fighters" once a year, 15 February, the day of John Frum's supposed return (exactly unknown), conduct "parades" In combat paint and T-shirts with the inscriptions "TA USA" (Tanna Army USA). At the end of the 1970-ies, adherents of the cult opposed the immediate establishment of the independent republic of Vanuatu, believing that a centralized state does not fit into the principles of "kastom". The movement has even its own political party, which represents its interests in the country's parliament. By the way, many Tannans believe that the "Cargo" has returned to them in the form of white tourists visiting the islands and leaving a lot of money here.

Admirers of the tongue-tied Duke

"Gruzopoklonniki" divide the island with another, no less interesting, group - for several villages where thousands of people live, religious objects became portraits of Prince Philip II, the husband of the British Queen Elizabeth. The elderly duke of Edinburgh is revered as a deity and believes that one day he will return, generously endowing the islanders. He was declared the incarnate son of a mountain spirit, who, according to legend, had to go to the seas to marry there with a woman with power. It is believed that the formation of the belief was influenced by the sermons of Christian missionaries about the coming coming of the Messiah. Knowing how much respect the monarchy couple enjoyed from the colonial authorities (and the independent Republic of Vanuatu was created only in 1980 year), the natives were convinced that the prophecy was fulfilled. Faith in the prince was reinforced by a royal visit to the New Hebrides in 1974 - then the Melanesians saw firsthand their idol, in the snow-white form of the Royal Navy descending on the gangplank in Port Vila, the capital of the condominium.

Our whole life is one complete irony, and the movement of Prince Philip serves as another confirmation of this: not once and not twice did the Prince Consort fall into a difficult situation because of ambiguous jokes. So, once he asked the Australian aborigines if they still throw spears at each other. One of the black members of the British Parliament also got either from wit or from the inarticles of the Duke of Edinburgh: His Highness asked the people's representative what country he came from. And the queen’s spouse recommended to British students in China not to linger in a foreign land, otherwise their eyes would narrow.

But such blunders remain a secret for the islanders, because the cultists do not know how to read and write, and in their villages there is no electricity and running water. Men with self-made bows and arrows hunt wild pigs and bats. Accordingly - no newspapers, radio or television. In short, life has changed little since the discovery of Tanna by James Cook. Prince and "Mysis Quinn," as reverently called Elizabeth, aware of what is happening on the island, and Philip even allowed his assistants to regularly send their photos to Tanna. The most important relic, of course, is the first, still black and white portrait of the 1960-ies, fairly spoiled by humidity and tropical downpours. Another, no less revered, the image refers to 1980 year - on it, Philip poses with an expensive gift, a ritual baton is small. The letters from Buckingham Palace, alas, did not spare the mouse. And in 2007, five natives went to London, where they were acquainted with the civilization for a month, and then received an audience with the consort - despite the fact that they could not persuade the "deity" to return to the island, they nevertheless remained Happy with the visit and brought to Tanna valuable replenishment for the "photoreclub".

Despite almost half a century of veneration, the cultists learned only in 2007 that the birthday of the duke falls on 10 June. Since then, magnificent celebrations have been held here on this occasion - the British flag proudly flies on a bamboo flagpole, and the islanders perform ritual dances. Chief Jack Naiva believes, however, that the festivities will not be complete until Philip himself decides to visit them. “Tell King Phillip that I’m getting old and really want him to come to us,” he told reporters once in a while. “If he doesn’t come himself, he may be able to give us some useful things: a Land Rover, a couple of bags of rice or some money.”
Tags: Oceania Extreme tourism economy