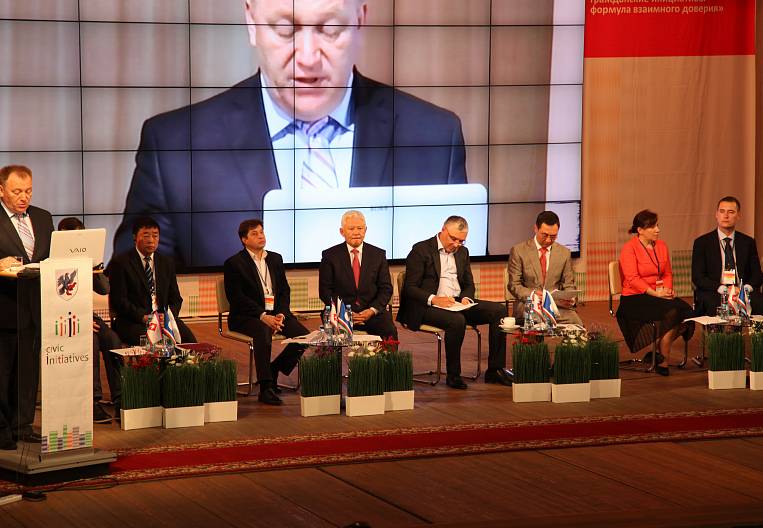 At the international conference "Cities and People: Civil Initiatives - a Formula of Mutual Trust", which was recently held in Yakutsk, issues of public initiatives were discussed, including the right of citizens to participate in the life of the city, to take an active part in solving public programs.

The forum in Yakutsk has turned out almost that home. Chairman of the Public Chamber of the Russian Federation on problems of local government, social infrastructure and housing and communal services, the President of the Union of the cities of the Arctic and the Far North, Igor Shpektor noted that he is in Yakutsk for the fourth time and that this is an advanced city with its own special development. A Extraordinary and Plenipotentiary Ambassador of the Dominican Republic in the Russian Federation and the Dean of the Ambassadors of the Group of Latin American and Caribbean Group (GRULAC), Vladivostok, Jorge Luis Perez Alvarado shared that Yakutsk him so much, that he sees good prospects in bilateral tourism development. "I hope that we will establish strong friendly relations between you and us in terms of tourism," he said.

Opening the event, the head of the city of Yakutsk Aisen Nikolaev told about the plans for the further development of the city. “We all understand that issues cannot be solved by administrative, budgetary resources alone. Combining the efforts of the authorities, citizens and business is the main condition for social well-being, economic growth in cities, ”he said.

A.Nikolaev also noted that a new street - Sevastopolskaya opened in Gagarin district. In his opinion, the name of the street is a symbol of strengthening friendship between the two Russian cities - Yakutsk and Sevastopol.

In the section "Open Municipality - Principles and Technologies for Implementing the Interaction Between Society and Power", crowdsourcing, the people's budget, and volunteerism were discussed very sharply. Among the moderators were the head of the social projects "Open Government" (Moscow) Galina Voronchenkova, candidate of historical sciences, deputy chairman of the Council for the Support of Civil Initiatives of Public Associations at the NEFU. M.K. Ammosov, chairman of the board of the consumer society "Tuskul" (Yakutsk) Afanasy Nikolayev and deputy of the Yakut city Duma, director of the Technopark "Yakutia" Anatoly Semenov.

Member of the Council of the Union of Municipalities of Greece, Mayor of Larissa (Greece) Konstantinos Tzanakoulys told about the arrangement of the city. According to him, the Pineos River is a fundamental natural element of the city of Larissa, around which life has always boiled. In the 20 century, due to the development of urbanization, the Pineos River was heavily polluted. The reasons could be the large volumes of water used in agriculture, as well as the accelerated development of industry in the city. The city's public believed that the river should be cleaned and equipped.

"Over time, the authorities of the city cleared the river and turned the embankment into a popular place where people began to gather, happy to rest, like many, many thousands of years ago. Cultural, entertaining and social events are actively held here. For example, recently a festival was organized, which brought together several thousand people. The role of the public in this is great: they supported the initiative of the municipality, "he said.

In the work of the section, Margarita Popova, the head of the "One click Yakutsk" croud portal, made a report. She spoke about the concept of crowdsourcing, as it applies in other Russian cities, was also covered activities of crowd-portal «One click Yakutsk» and how two concerts participating in the project "Voice" Arina Danilova was recently organized.

The Chairperson of the Union of Architects of the Republic of Sakha (Yakutia) Irina Alekseyeva, the Director for Regional Development "Arkhpolis", the founder of the Institute of Applied Urban Studies Svyatoslav Murunov and the Deputy Chairman of the Public Chamber of Yakutsk, the editor-in-chief of NewsYkt.ru became moderators of the section "Creating public spaces: projects that change cities". Anton Zhondorov.

“Yakutsk is positioning itself as a dynamically developing city,” said I. Alekseeva. - However, along with the undoubted success in planning and urban planning, there are many problems. For example, in the city canals in the spring people skate, in the summer there is boat rental, pedestrian bridges are equipped, but, nevertheless, lakes and canals are covered with mud, they contain garbage. ”

During the discussion, experts voiced opinions about urban public spaces and how these public spaces can help the city to show its uniqueness.

The theme of the presentation of Professor of the Moscow Architectural Institute, Doctor of Architecture Nikolai Schepetkov was "Light Design in Public Spaces of the City". He 40 years deal with this topic, including closely in the days of 850-year anniversary of Moscow.

"For example, over the lighting of Triumfalnaya and Tverskaya areas. He also worked on the projects of public streets in Moscow. Of course, it can not be said that all our works are extremely interesting. It is necessary to design in a complex way, for the money to create a much more valuable, artistic environment, suitable for living. And then we have one doing it, another - another, the third - something else. We must work so that later it does not come out "we wanted it better, but it turned out as always," N.Shchepetkov expressed his point of view.

In his opinion, the issue of energy saving is very important. “We need to use LEDs and try for the light to illuminate not the space, but a specific space,” he said.

Honored Architect Yakutia Yuri Kholmogorov believes that "the main problem of Yakutsk - the problem of agglomeration. From Kaliningrad to Kamchatka there is one standard that does not take into account local specifics. "

Very interesting was the performance of the urbanist from Berlin Thomas Stelmakh, who spoke about specific projects. First of all, the screen showed a photograph of the city of São Paulo (Brazil) from a bird's flight.

“On the left, you see the chaotic location of a spontaneously developing city,” T. Shtelmakh explained this picture. - And on the right - a modern city, built on the basis of the master plan. Here I do not see the right answer, neither left nor right. And there, and there are specific problems. At São Paulo, I see similar problems with Yakutsk, despite the difference in climatic conditions. I would advise not to conquer all the new spaces for the city, but to fill in the empty ones, which you have enough. ”

Vice-President of the Union of Architects of Serbia Petr Arsich agreed that Yakutsk has enough public space. "There is something to work on, to create. I did not see here the real contact of the river Lena with Yakutsk. So there is great potential in the development of the city, "he said.

Director of the Institute of National Values ​​from Nizhny Novgorod Anatoly Balyayev stressed that it is necessary to preserve the identity of the city.

"Cities are like people," he said. - Moscow, Paris, New York, Penza, Yakutsk, Vladivostok - they are all different and alive. I want to wish Yakutsk health, strength, creativity and prosperity! Turning to cities as living - you can change everything. It is necessary to change everything so that a person wants to live in a lively, beautiful environment. If evolution does not occur, a revolution takes place. Yesterday I heard a very beautiful concept: "Yakutsk is the northern capital of the world." I wish Yakutsk to evolve. Create fairy tales for your cities, create myths. "
Tags: Yakutsk Cities and people: civil initiative - a formula of mutual trust Aisen Nikolaev Sevastopolskaya Str. Arina Danilova Vote energy saving