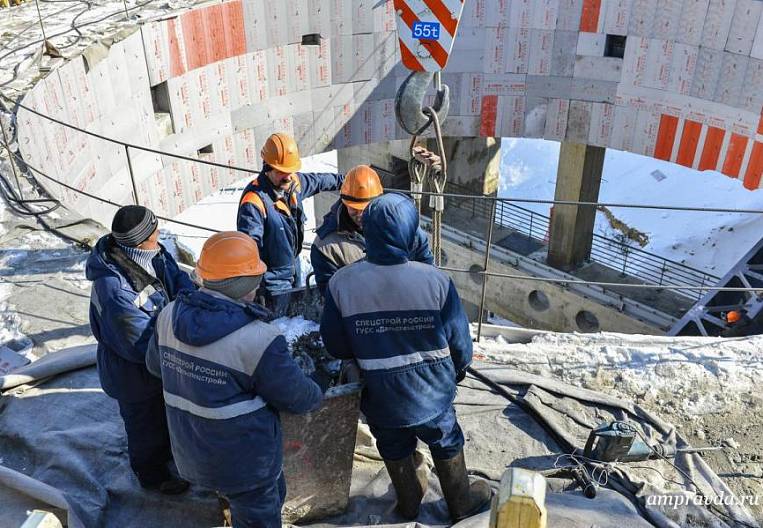 On April 4, the whole country learned that about a hundred workers of the "main construction site of the country" went on a hunger strike (albeit a short one - about 12 hours) due to more than a month's delay in wages. As a result, Dmitry Rogozin's telephone conversations from Sevastopol with the forced rioters and an urgent week-long business trip to the Vostochny one of the director of Spetsstroy Rossii, Alexander Volosov. Was there any sense in this?

We are talking about 112 employees of various subcontractors, who, under various pretexts, had their salaries delayed from December last year to February this year. At the same time, both Spetsstroy and Dalspetsstroy assured that they had fulfilled their obligations to subcontractors in full.

“At the moment there are 16 people who have not yet received the money, but today, we are sure they will receive it,” says Dmitry Bushuev, one of the initiators of the “hunger riot”, an employee of DSS LLC (the very company to which the inscription was addressed on the door of the command post bunker: "DSS, return the money to the workers" - the photo was quickly sold out). - Specifically, in our organization, there were delays in payments for January-February, and, probably, March - even though the payments had not yet arrived. On average, each of us is owed 50 thousand per month, plus all the allowances: "Far Eastern", KTU and others. "

“I have been working for about a month, I haven’t seen my first salary - it should be around April 10, but, I confess, it’s scary,” Yuri Khachatryan, a welder from the Khabarovsk Territory, supports the conversation, “I have four children left at home.”

The situation, as incited to the limit, could be defused by Dmitry Rogozin - even on weekends he persuaded people on the phone to stop the hunger strike and wait for the payments. As it turned out, I made it.

“Most importantly, people saw that they have rights: human and professional. We met with workers - they are from companies that did not pay money: they are already calculating there. Secondly, both I and the head of Spetsstroy appealed to the workers with a request not to leave the construction site, and they agreed, they will all stay here. As my guarantees, I left the phone number of my office in Moscow, where they can call in all future cases of violation of their labor rights, ”Rogozin said.

The topic was continued after a closed meeting with all divisions and structures working in Vostochny. Dmitry Rogozin spoke about his vision of the situation. “People who work at the construction site and are attracted from various regions are, first of all, people. And it is necessary to ensure the proper level of culture of production, life and work, - Rogozin said during communication with the press, - therefore, as they say, "the author on the stage": the former head of "Dalspetsstroy" (now he is the deputy director), Mr. Savin, will be dismissed on my behalf. But only after he returns 800 thousand rubles to the organization, which he paid to his wife, who was listed with him in Dalspetsstroy for a month (according to the information that we managed to find out, she was engaged in estimates - approx. Aut.). That is, 800 thousand were enough for him for a wife, but not enough for workers. He did not inform his management and the construction site in time that such a situation arises. "

So far, the Deputy Prime Minister said, it has been decided to confine himself to only one dismissal, but if the situation repeats itself, the measures will be much harsher. At the same time, special attention will be paid to feedback from labor collectives. “Starting tomorrow, a representative of the Amur Labor Inspectorate will be permanently on Vostochny to check the conditions in which the builders live and work,” commented Alexander Kozlov, Acting Governor of the Amur Region. "Naturally, he will also keep under control any requests from workers."

As a result, following the first high-profile labor proceedings at Vostochny, 51 people have already gone home, having received their full salary. For the rest, including those nine who did not come to work, they promised to make payments within XNUMX hours. Also, the management of Spetsstroy announced the names of the "heroes" - the leaders and organizations that provoked the collapse: the original contract for subcontracting from "Dalspetsstroy" was concluded with the firm "Ideal" (general director Oleg Yatsenko), which in turn subcontracted "Stroyindustriya-S" general director Roman Suvorov) and "DSS" (general director Sergey Terentyev).

"The director of Ideal is in the Khabarovsk hospital for treatment, we called the director of DSS" from St. Petersburg, where he was also treated, "commented Alexander Volosov, director of Spetsstroy of Russia. - These organizations will no longer work not only here, but also on the territory of the country. We pay salaries at the expense of Dalspetsstroy, but at the expense of the work that these companies have performed or will perform. The main thing is people. As a result, 61 people from those to whom they owe money went to work today. "

The thief must be in prison, and the spaceport is built

During the conversation with the vice-premier, journalists also touched upon the topic of frequent checks, and almost as frequent detentions in the East.

“Most of those on whom criminal cases are now being conducted were involved in construction work under the former Minister of Defense - there was no control, probably, specifically to create an environment for embezzlement,” explained Rogozin. “But it is important that prosecutors and law enforcement officers act on the basis of the principle“ we need a cosmodrome ”. The thief must be in prison, and the spaceport must be built - these two tasks must be solved in parallel. "

By the way, soon another one, no less important, will appear here: by the start of 2018, it is already necessary to create a start for the "Angara", in the construction of which, it seems, will not be without surprises. “In the near future, the head of Roscosmos, Igor Komarov, will report to the president about his views on manned space exploration. We came up with unique solutions for the 2nd launch pad and there are some plans for the ISS, - Rogozin said. - We want to report on the eve of Cosmonautics Day, so if the head of state supports it, we will launch this work. For now, I can say that if we are talking about a national manned station, we will deliver it from here. "

Finally, Dmitry Rogozin once again focused attention on the timing: according to him, now a critical moment is coming when Spetsstroy should start giving ready and clean rooms for the installation of equipment - this must be done by July 15. However, all problems can be solved with proper work organization. “The monologue should stop and the dialogue should begin. The schedules must be fully synchronized, - said the deputy chairman of the government, - in addition, I will definitely discuss with Dmitry Medvedev the possibility of giving Roscosmos an additional "financial maneuver" in order to ensure the advance transfer of funds to builders for payments related to the delivery of equipment: order, production, delivery cycles and assemblies cannot be violated. I will personally check how my instructions have been fulfilled at the end of April. "
Tags: Cosmodrome Vostochny Dmitry Rogozin Spetsstroy Roskosmos Igor Komarov arrears Hunger strike