News February 23 2020
22:50 MTPL policy fell by 2,8%
Khabarovsk Krai 22:21 Sturgeons seized 80 million rubles from poachers in the Khabarovsk Territory
The Republic of Buryatia 21:59 Coronavirus suspected of a resident of Buryatia


09:00 Experts named the regions with the highest rental prices
08:15 Expectant mothers will be saved from bureaucracy with patrimonial certificates
February 21 2020
22:26 Organizers of financial pyramids exposed in the Far East
Kamchatka 08:38 The brightest ethnic exhibition opened in Petropavlovsk-Kamchatsky
The Republic of Buryatia 07:34 Buryatia will receive 14 billion rubles for bridges and overpasses

Roads hamper the development of tourism

Comfortable transfer is one of the main components of the tourism industry. From the bus and the road to the hotel or attractions begins the journey. There are not many new comfortable buses in Kamchatka. The leader in this market is individual entrepreneur Oleg Pushaev. He spoke about the state of the transport infrastructure on the peninsula, as well as about the features and difficulties of working in the field of tourist transportation. 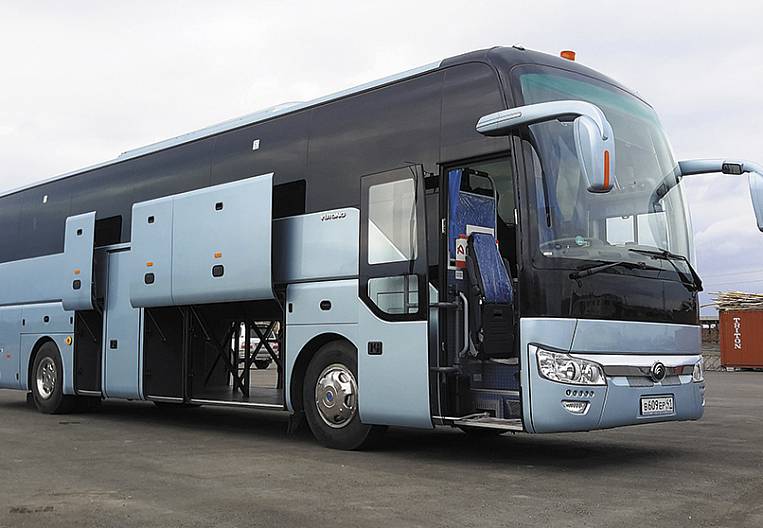 - Why did you decide to engage in logistics in the field of tourism?

- 18 years ago, one of the travel agencies in Kamchatka, which did not have its own transport, began to attract me as a carrier. I drove the tourists in a minibus Hiace. I was attracted, because the car was newer, had better throughput than others. Gradually, the business grew and developed in parallel with the passenger urban and suburban transportation. I continue to work for them now, because the transportation of tourists is only part of the business. The tourist flow is big only in August and early September, only single requests come the rest of the time.

- How has your fleet increased since those times?

- Now I have enough units of tourist buses. Five years ago, I first acquired several Mercedes tourist class. They work only for travelers, we don’t attract them on city routes. Now I have four such buses. There are buses on 33, 41 and 44 places, but they operate on urban and suburban routes. The biggest problem of Kamchatka is that there are practically no large tourist buses that are used only for guests of the peninsula. Mostly in season and when cruise liners arrive, regular carriers are connected.

- What are the years of work consider their achievement?

“This year I purchased a big Chinese-made 51-seat bus. It is new, 2018 year of release. This is a tourist class bus, these work only in Moscow, St. Petersburg and in several other major cities. In Kamchatka, such a bus is one. Of course, there are few orders for it, but I bought it because I decided that I needed to change something in the field, to attract more travel companies to cooperate. Decided to be ahead of everyone in this part. This season many companies placed orders for this bus. This is a completely different level of service. The Agency for Investment and Entrepreneurship Support of Kamchatka Krai helped me with buying a car. Taking into account the delivery to the peninsula, the installation of the GLONASS bus cost me almost 10 million rubles. The agency paid the first lease payment - 3 million rubles. This is a significant support. Of course, for the development of transport infrastructure is not enough. While I alone took advantage of this measure of support, the rest of the carriers are not ready for such purchases: the payback period of the equipment is more than seven years. If the regional government adopts a program for the development of tourist transport, it will be of great help for many carriers.

- What successes can you boast not in the field of purchasing vehicles?

- Most travel agencies work with me, they appreciate the new technology that does not work on urban routes. Basically all transfers "on asphalt" converge on me. If 18 years ago, I collaborated with only one company, now their order is 15. Do not forget about the personnel issue - you have to instruct drivers to monitor their dress code, behavior. I have drivers who work on 5 – 10 years, they know the routes and guides. These are relationships that add up over the years, and I appreciate it.

- What are the problems and difficulties encountered in the work?

- One of the problems is the short tourist season. The demand for such transport, as we have, is only a month or a year and a half. But the main problem is poor access roads to popular sites, to the points of attraction of tourists. Even the airport is not adapted for large buses. Tourists have to wait for the whole group; only after everyone gathers near the airport, the bus makes its way among a large number of private cars. Another point: there are no roads to all tourist places, for example, to the ocean. There are low hanging down branches of trees, many holes and bumps. Newer, lower cars cannot go there. The road was graded once this year - for the arrival of Dmitry Medvedev. Literally in two days, the journey was brought to a state in which he had never been: the road was widened, poured in, and after the Prime Minister left, they forgot about it again. In the campsites are not properly made areas for parking and turning buses. A huge request to the people who are responsible for the roads, so that they can make access roads to tourist sites - everyone is interested in this. In the meantime, travel agencies have to hire jeeps and crews, but this is not the level of service.

- What are the priority tasks you set for the development of your business?

- The most priority task is the updating of equipment. This is connected not only with comfort for tourists, but also with security: the fresher the car, the more modern the security system. New buses are easier to manage, they are more reliable. Of course, this will require considerable investments, but you need to look precisely in this direction. Still, we create the image of Kamchatka, the transport and logistics component is very important, because we are the first to meet the tourists, we take them to interesting places. Another task for me is to attract other travel companies to cooperation. Competition has not been canceled, you need to understand that you need to be ahead of other carriers.

- How do you think the logistics and transport infrastructure in Kamchatka develop? Are there any improvements, what are the prospects?

“Ten years ago, the roads were much worse.” We worked on the routes, and because of the pits, we periodically on the spring buses broke. Now the roads have become better, but in terms of the access to tourist facilities, nothing has changed: if new facilities appear, then there are no good access roads to them (there are no ramps to the rivers, turning platforms). Even to the pier in the area of ​​Bogorodskoe Lake on a big bus did not drive up. I do not know whose task is to make these access roads, but I think that it is necessary for tourist agencies and regional authorities to develop such infrastructure, because companies alone will not be able to do this. I can not say that the infrastructure is actively developing, but I really hope that the situation will change.
Tags: transport logistics traffic tourism Travel infrastructure
Media News2
See also: