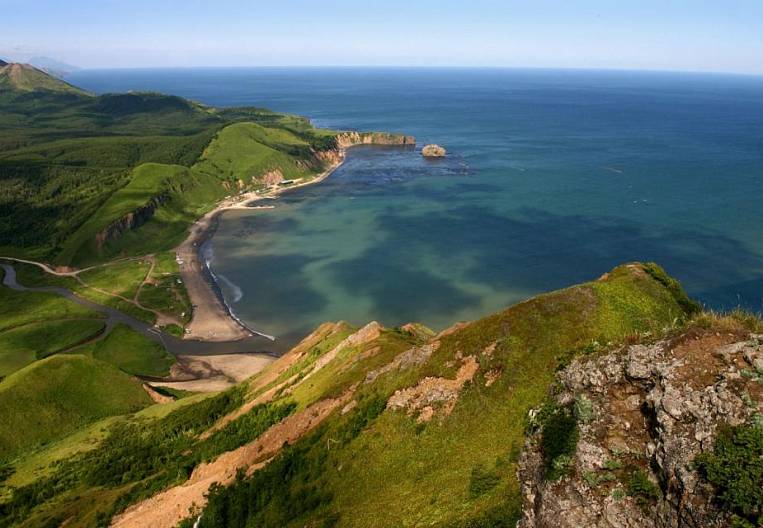 Russia and Japan: Acceleration to Peace? Pacific Underwater Racing Nineteen men and one woman Shinzo Abe
All author's materials
The talks held in Moscow last week between Japanese Foreign Ministers Taro Kono and Russian Foreign Minister Sergei Lavrov did not arouse much interest in the leading Japanese media. Even the regional newspaper Hokkaido Shimbun ignored them. This is despite the fact that the newspaper, by virtue of its status, is the most interested and informed publication on the territorial problem in Russian-Japanese relations and carefully monitors all the nuances and slightest shifts in the positions of the parties on this problem. As you know, the problem is caused by Tokyo's claims to the four islands of the southern Kuriles.

Japan's low interest in the event is apparently due to the fact that the meeting of ministers took place literally after the summit of their leaders - Japanese Prime Minister Shinzo Abe and Russian President Vladimir Putin on the sidelines of the APEC forum in the Vietnamese city of Da Nang. The results of the summit, which became known, however, shed little light on the prospects for resolving the notorious territorial dispute.

The ministerial meeting itself, as expected, did not bring any sensations or breakthroughs. With a high degree of certainty, it could be assumed that it would focus on the two most demanded topics in bilateral relations today: unabated tensions on the Korean Peninsula and joint economic activity in the southern Kuriles. In Japan, they are called their northern territories. Putin and Abe agreed on these activities during the Russian leader's official visit to Japan in December 2016.

In Japan, one of the few mainstream media outlets to respond to the talks of the foreign chiefs was the mouthpiece of the Japanese business community, the Nikkei newspaper. On November 25, the newspaper ran an article under the characteristic headline "Japan and Russia Face Growing Divide Over North Korea." It notes that in the negotiations between Lavrov and Kono, Japan pushed Russia to take further steps regarding North Korea's nuclear and missile development. However, she received criticism in response for the emphasis on economic sanctions and the threat of military action initiated by the United States.

According to the newspaper, Japanese Foreign Minister Taro Kono told his Russian partner Sergei Lavrov that Russia can play an exceptionally large role in North Korea. This was said in order to secure cooperation from Russia in such an area as the full implementation of UN sanctions against the hermit state.

Lavrov, for his part, expressed concern over Japan's missile defense, including a plan to acquire the US-developed ground-based Aegis Ashore system. In response, Kono stressed that this missile defense system is aimed at protecting against attacks from North Korea and does not pose a threat to Russia.

Later at a press conference, according to a business publication, Lavrov said a military scenario against North Korea would be disastrous. Russia favors a solution to the problem through dialogue and calls into question the Japanese-American pressure in favor of an oil embargo and tougher economic sanctions.

Kono and Lavrov also discussed a plan for joint economic activities in the disputed territories. Here, countries have focused on five sectors, including tourism. It is curious to note that the Nikkei presents as already resolved the fact that Russia and Japan will create a special system for joint management in the southern Kuriles, which does not undermine the legal positions of the parties on the islands controlled by Russia, according to the newspaper's terminology. Lavrov and Kono agreed to negotiate at the level of department directors in December this year, and deputy ministers in January or February. In addition, the newspaper announces that at a meeting in Moscow, the ministers agreed to advance preparations for the summit in Russia next May, Japanese Prime Minister Shinzo Abe and Russian President Vladimir Putin. Kono also suggested that Lavrov visit Japan before the proposed summit.

In addition to negotiations with Lavrov, Kono took part in a regular meeting of the Russian-Japanese intergovernmental commission on trade and economic issues, of which he is the co-chairman. At the meeting, the minister discussed with his Russian counterpart, First Deputy Prime Minister Igor Shuvalov, the economic cooperation plan proposed last year by Shinzo Abe, consisting of eight points, including energy, medicine and other areas. In the same place, Kono called on Russia to lift restrictions on imports from Japan of industrial and food products, imposed after the accident at the Fukushima nuclear power plant in March 2011.

Finally, Nikkei reminds readers that the grandfather of the current Minister of Foreign Affairs of Japan, Ichiro Kono, was one of the main diplomatic negotiators at the conclusion of the joint Soviet-Japanese declaration in 1956, and his father, Yohei Kono, when he was also the Minister of Foreign Affairs of Japan was the founder from the Japanese side of the above-mentioned intergovernmental commission. Thus, Taro Kono, with his current trip to Moscow, continued the family tradition of developing relations with Russia, the economic newspaper concludes.

The right-wing conservative newspaper "Sankei Shimbun" in the headline of its article also makes the thesis that during the negotiations between Lavrov and Kono, a moat was formed between their positions on North Korea. The newspaper, in particular, highlights the moment that in response to Kono's remark that the anti-missile system deployed in Japan does not pose a threat to Russia, Lavrov expressed his conviction that the United States would not transfer control of this system to Japan.

Instead of their own materials about the meeting of the foreign ministers of Russia and Japan, the liberal Asahi Shimbun and some other newspapers publish a report about it by the American news agency Reuters. Moreover, in the headlines of the reprints, these publications again bring out Russia's concern about the cooperation between Tokyo and Washington in the field of missile defense. The American agency itself, analyzing the Russian-Japanese negotiations, comes to the conclusion that Japan wanted to focus on resolving the seven-decade-old territorial dispute between the two countries, but Lavrov's remarks about North Korea cast a shadow over the negotiations.

The agency mentions the fact that earlier this year, Japanese Prime Minister Shinzo Abe expressed hope for a breakthrough in Tokyo's territorial dispute with Moscow, but now those prospects have dimmed. In support of their prediction, Reuters quoted Lavrov and Kono as saying that they had made progress on measures to speed up Russian-Japanese economic cooperation on the islands, but did not provide any details on how to resolve the key issue of the dispute - who has sovereignty over the islands.

As for the 13th meeting of the Russian-Japanese intergovernmental commission on trade and economic cooperation, it did not evoke any response from the Japanese media. And it's not at all about the unlucky number of the event. The lack of reaction can serve as evidence that Russia is not among the priority economic partners of Japan - the third economic power in the world and the second in Asia.

Indeed, according to the Federal Customs Service, in 2016 the volume of Russian-Japanese trade amounted to only $ 16,1 billion, although some three years ago it exceeded $ 30 billion. Among the foreign trade partners of our Far Eastern neighbor, our country occupies only 15th place (its share in Japan's total trade is scanty 1,6%). Japan is also not a leader in our foreign trade - it takes only 7th place among the foreign trade counterparties of Russia (3.4%).

In 2015, the volume of accumulated direct investments from Japan in Russia decreased to $ 1,3 billion (15th place among the investing countries) compared to 2012, when they were equal to $ 2.7 billion. The halving of this indicator can be explained not only by the deterioration of the investment climate in our country, but also the influence of sanctions from Western countries, to which Japan belongs, despite its location in the East. Russia accounts for microscopic 0,3% of the total foreign investment of the Land of the Rising Sun. By the way, Russian investments in neighboring Japan are tending to zero against the paradoxical background of the annual export of tens of billions of dollars from our country.

So far, no significant economic projects are visible in that package of documents worth $ 2,5 billion, which were signed in Tokyo last December during the Russian president's visit to Japan. Due to the insignificance of its scale, one should not expect that the expected joint management in the southern Kuriles will "make the weather" in the trade and economic relations between the two countries. For Tokyo, it has more political than economic significance.

In general, it is no coincidence that First Deputy Prime Minister Shuvalov summed up at the above-mentioned meeting of the intergovernmental commission: everything at the highest level. "

For his part, Taro Kono noted that during the meeting, the problems of the development of the Far East, which, according to the minister, have great potential, were touched upon. “It is possible to develop Russian-Japanese cooperation in this region in such areas as agriculture, forestry, fisheries, to establish infrastructure to create an export base in the Far East, to establish conditions for the development of investments,” the minister said.

In a word, as in previous decades, we will listen to the dialogue about the enormous unrealized potential of trade and economic cooperation between Russia and Japan for many years to come. But both sides argue that it should pave the way for the solution of the territorial problem and, ultimately, the signing of a peace treaty between the two countries.
Tags: Japan Russia DPRK Kurile Islands