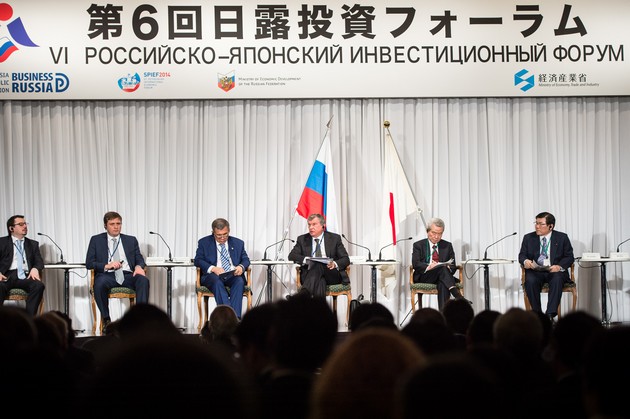 Despite the fact that the Japanese leadership supported the sanctions imposed on Russia by the European Union and the US, during the forum, 13 agreements and memoranda in the field of Russian-Japanese cooperation for a total of more than 2,5 billion dollars were signed.

The forum was intended to demonstrate tangible successes and even actually "breakthroughs" in the sphere of cooperation between Russia and Japan, the growth of trade and mutual investments, and most importantly - the presence of serious prospects in this regard for the future. The growth of trade in recent years is indeed expressed in impressive numbers: in 2007 it amounted to $ 21 billion, in 2013 - already $ 34 billion, Japan now occupies the seventh place among the trade partners of the Russian Federation, ahead of the USA, Italy and Turkey. In January-September 2013, the accumulated Japanese investment in the Russian economy amounted to $ 10,5 billion, the accumulated foreign direct investment - $ 682,8 million. At the same time, from 2005 to 2012, Russia attracted several times more direct foreign investment than its partner: in 2012, the inflow of capital investments into the Russian Federation from abroad amounted to $ 50,6 billion, and to Japan - only $ 2,5 billion. ...

The main topic for discussion in Tokyo was the prospects and opportunities for opening new spheres of investment cooperation between Russia and Japan. At the opening of the forum, Deputy Minister of Economic Development Alexei Likhachev stated that our country sets itself the task of becoming one of the countries "not just with a favorable but with the best business climate." "Winning in competition for direct investments, creating the most attractive business conditions means winning in the struggle for the effectiveness of the national economy, for a new quality of growth," he said, stressing that priority should be given to knowledge-intensive industries.

The number of participants in the forum was much larger than last year: the organizers even had to immediately change the place of the location of the event, in order to give the opportunity to attend it to all comers. During roundtables, Russian and Japanese representatives of the state establishment and business circles discussed a wide range of issues: energy saving, town planning, new projects in the automotive industry and in the sphere of technical innovations, medicine, transport and infrastructure, etc.

The official Russian delegation at the forum was represented by more than 200 people, including representatives of leading ministries, regions of Russia, major companies and enterprises, including Rosneft and Transneft. The Japanese side was attended by the heads of economic ministries, the Japan Business Federation (Keidanren), the largest corporations, including Toshiba, Mitsubishi Motors, Mitsui, the Bank for International Economic Cooperation, and others.

Speaking about the potential for cooperation with Japan, the head of Rosneft Igor Sechin in his report outlined a rather broad perspective: the construction of the Far Eastern LNG plant, the establishment of the Eastern Petrochemical Company, as well as other projects in the extraction and processing of natural resources. The Japanese side, according to Sechin, proposed "a significant expansion of investment opportunities by entering the capital of high-yield mining and processing companies in Russia with minimal risks." Partners are supposed to be involved in joint investments along the entire technological chain - in extraction, infrastructure, processing and transport of energy carriers - and with them to develop oil and gas fields, develop oil refining and petrochemicals, ensure global energy security and help meet world demand for energy. What exactly the projects meant, the company does not explain, referring to commercial secrets, but experts believe that it is likely with the high probability of offshore projects of Rosneft, in the development of which it is necessary to invest at least 400 billion dollars.

Political issues related to the signing of an agreement between Russia and Crimea added a certain amount of nervousness to the course of the investment forum. However, the economic sanctions, which were announced at the forum, in the opinion of the Japanese side, will not have a significant impact on the business climate in relations between the two countries. According to the representative of the business association Rotobo Kunio Okada, it is possible that only a few not very important projects will be suspended. “Everyone understands that economic sanctions are not beneficial to either Russia or Japan, and political statements are political statements,” the expert said.

As for the real obstacles to the development of joint projects, the Japanese partners often complained that the Russian authorities are showing bureaucracy and slowness. Giant corporations feel quite confident in Russia, but small and medium-sized businesses are still acting with some apprehension. Sometimes justified. One of the participants of the forum gave an example when, during the 3 year, his company was compelled to collect so many different documents for reconciliation and permission, that the height of the folders with them reached a height of 4 meters.

The fault of the Russian bureaucrats was decided to be ironed out in the eyes of the partners by the head of Tatarstan Rustam Minnikhanov. He offered Komatsu, whose representative complained about excessive official obstacles, to develop business in his republic, where there are economic zones "Alabuga" and "Innopolis". Among other things, Japanese investors are also quite successful there.

They were discussed and, as a result, formalized in the form of specific protocols on the intentions of the prospects for cooperation in various fields. According to Russian forum participants, Russian-Japanese projects in energy, agriculture, medicine and high technologies will give a new impetus to the development of these industries in the Russian Far East and will become mutually beneficial. Thus, representatives of FESCO, Marubeni Corporation and United Grain Company have agreed to increase grain exports from the Far East to Japan, South Korea, China, Taiwan and other East Asian countries. In the Far East port of Zarubino, a grain terminal is planned to be built. Cooperation will continue, and in the energy sector - for today Japan imports about 95-99% of energy resources. According to Yaroslav Podsevatkin, representative of IC ATON, the issues of energy security, access to natural resources, energy saving developments, especially in the context of reducing the use of nuclear energy after the events at the Fukushima nuclear power plant, are critical for Japan.

The fact that the politics during the business forum was clearly in the background was evidenced by the fact that the eternal "territorial issue" of the Southern Kuriles was not discussed at the meetings, without which the Japanese-Russian dialogue is rarely handled. But despite all the visa restrictions in the framework of the new sanctions because of the "Crimean issue", the participants of the VI Russian-Japanese Investment Forum invited the Russian side to continue the dialogue at the SPIEF-2014 site, which will be held on 22-24 in St. Petersburg.

As for the trade turnover between Russia and Japan, the forum participants sincerely hope that he - as planned by the Ministry of Economic Development of the Russian Federation - will indeed reach 2020 billion by 50 year. 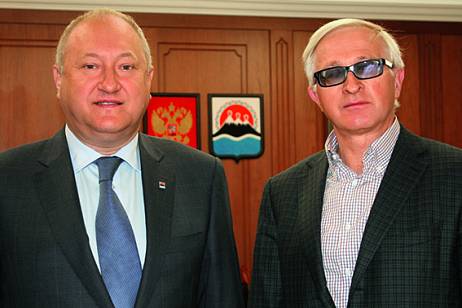