In Transbaikalia, two years earlier than planned, a "monument of wooden architecture in the" baracco style ", a witness of the times of the Gulag, may disappear. And in its place there will be a modern, albeit modest in size, airborne harbor. We are talking about the airport in the village of Chara in the Kalarsky district near the large Udokan copper deposit, which is now being actively developed and is considered one of the most important investment projects of the Trans-Baikal Territory. Transport accessibility of this deposit is the main condition in order to ensure the normal operation of the mining and smelting plant for the production of copper and copper concentrate. The company was built in the record short 2,5 of the year by the Baikal Mining Company (BGK), which is part of Alisher Usmanov's USM holding. 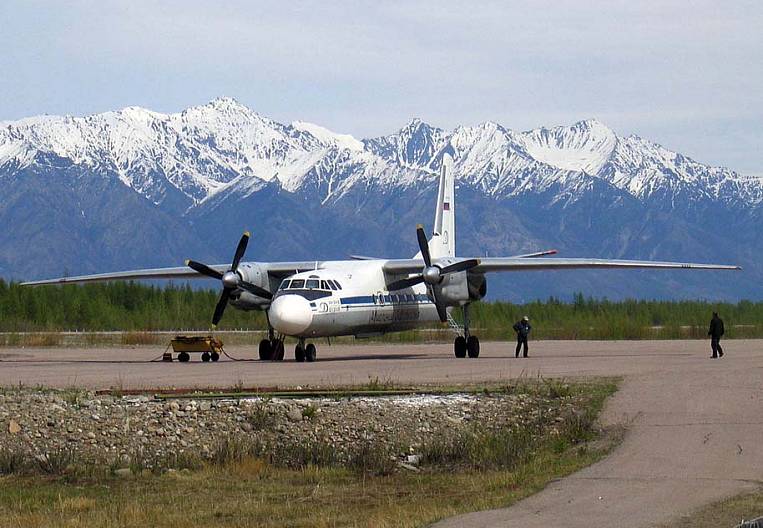 At the construction site, work is in full swing, the foundations of the main buildings are already flooded, a contract for the supply of equipment has been signed, its installation will begin in 2020. In 2022, the plant should reach its design capacity and begin to mine up to 12 thousand tons of copper ore annually. Thousands of people a year will be employed on a rotational basis at the construction site, with the launch of the first stage of the enterprise, two thousand will be added to them. For shipping MMC products, it is planned to use mainly rail transport (fortunately, the BAM route runs along 3,5 km, access roads to the plant and lines power lines are almost laid). But people just can't do without a normal airport.

Today Chara is a runway for small planes and a wooden building darkened with time, most resembling a shed or a hut. This "architectural monument" during the World Cup-2018 was sincerely admired by the Iranian information portal akharinkhabar.com. The author of an article describing 12 Russian “wooden airports” writes in amazement:

“Have you seen airport terminals built entirely of wood anywhere in the world? No? Then you are given a unique chance to see it with your own eyes in Russia! .. When you first see these wooden buildings, so similar to the "huts on chicken legs" from the famous Russian fairy tales, you will never think that these are actually modern aerial terminals ... Meanwhile, there are a lot of them in the Russian Far North. In and around them, you will not see chic boutiques, coffee shops, tea houses and restaurants (everything that accompanies modern airports in major cities of the world), but they are unique in their own way: in these God-forsaken lands, only through them communication is carried out with the rest of the world. "

It is unlikely that the enthusiasm of a journalist would be shared by those who were in Char not from tourist curiosity. At one time, the village was the center of the Trans-Baikal Gulag, where prisoners were transported by small aircraft. Then there came geologists who prospected here deposits of copper, uranium, gold and other minerals. It was they who built the current runway in the mid-20th century. You can use it only in the daytime: around the airport there are mountains of the Kodarsky ridge. The airport and all its buildings are in a rather dilapidated, and sometimes even emergency state. For numerous “gross violations of the aviation security legislation”, the Baikal Transport Prosecutor’s Office has already managed to bring the director of Chary to administrative responsibility this year. Lax staff, leaky fencing, general desolation, lack of safety certificates - the prosecutors did not like all this.

They planned to start reconstruction of the airport in two years - from 2022 to 2024, however, taking into account the significance of the Udokan project - an anchor for the Trans-Baikal ASE, the future source of at least 30% of tax revenues to the budget - we decided to postpone the dates. The authorities, at the request of investors, applied to Moscow with a request for immediate subsidization of construction works. This was discussed at a meeting held during the visit to Chita by Russian Prime Minister Dmitry Medvedev. Addressing the head of government, the Minister for the Development of the Far East and the Arctic, Alexander Kozlov, explained that the financing of the reconstruction of “Spell” is included in the program of the Ministry of Transport, funds for it are already provided for in the budget, but only from 2022 of the year. However, the investor has already ordered the design estimates, it will be ready in November this year. As soon as the representatives of the Ministry of Transport receive it and have the necessary funds, the construction will begin, it will be necessary to extend the runway from 1 800 to 2 100 m, to update or make from scratch all other airport structures and equipment.

“It is necessary to make appropriate changes to the comprehensive plan for modernization and expansion of the main infrastructure. To extend the strip, we need to further study this issue with the Ministry of Transport and the Federal Air Transport Agency. Please, Dmitry Anatolyevich, your support in this matter, ”summarized Alexander Kozlov.

On the whole, “good” was received, and the subject-matter conversation on this subject, the head of the Trans-Baikal Territory, Alexander Osipov, continued a few days later in Moscow at a meeting with Transport Minister Yevgeny Dietrich.

He also drew the attention of the Minister to the fact that subsidizing air transportation within the region is vitally important for the region. Now aviation flies to 11 settlements, and the route network needs to be expanded to 15 airports.

The reconstruction of "Chary" will require about 1,7 billion rubles. Investors made pre-project documentation and a feasibility study for the modernization of the airport at their own expense. The calculations were carried out by JSC "New Aviation" - a design and survey institute of aviation infrastructure and industry. He developed all the necessary documentation for helipads at the Kovykta gas condensate field in the Irkutsk Region, worked on orders from Gazprom, and participated in the modernization of the production base for the manufacture of parts for Il-114№ aircraft at the Aviastar plant in Ulyanovsk. As soon as Gosexpertiza accepts all the documents, the reconstruction of the Chara airport will go as part of state programs for the development of transport and the reconstruction of the regional airport network.