Far East in the palm of your hand

Far East Street makes the impossible possible - it shortens the distance. With a quick step, the entire Far Eastern Federal District can be crossed in a matter of minutes, but immersion in the atmosphere of each of the Far Eastern regions does not like haste. The EastRussia correspondent was convinced of this from his own experience. 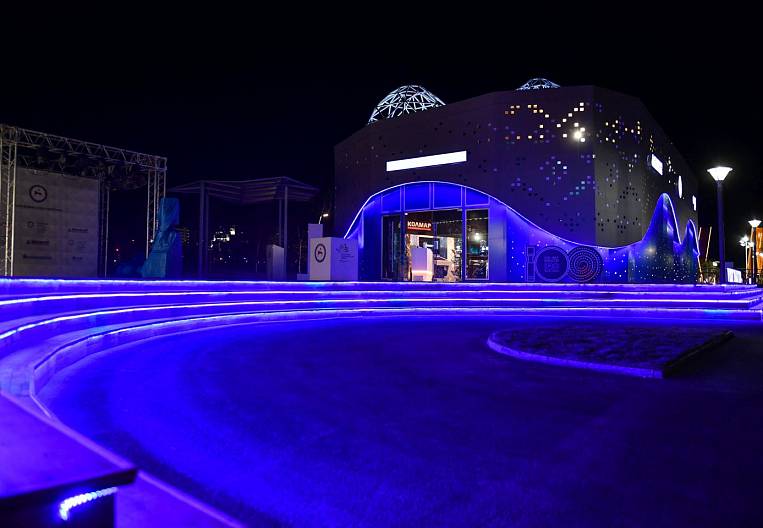 Enthusiastic "Wow!" are already heard on the way to the Far East street - each region strives to impress guests and participants of the forum with the appearance of its pavilion. The mini-branch of the Amur Region broadcasts to all those approaching the metaphor of a non-standard approach to solving problems inherent in the region. 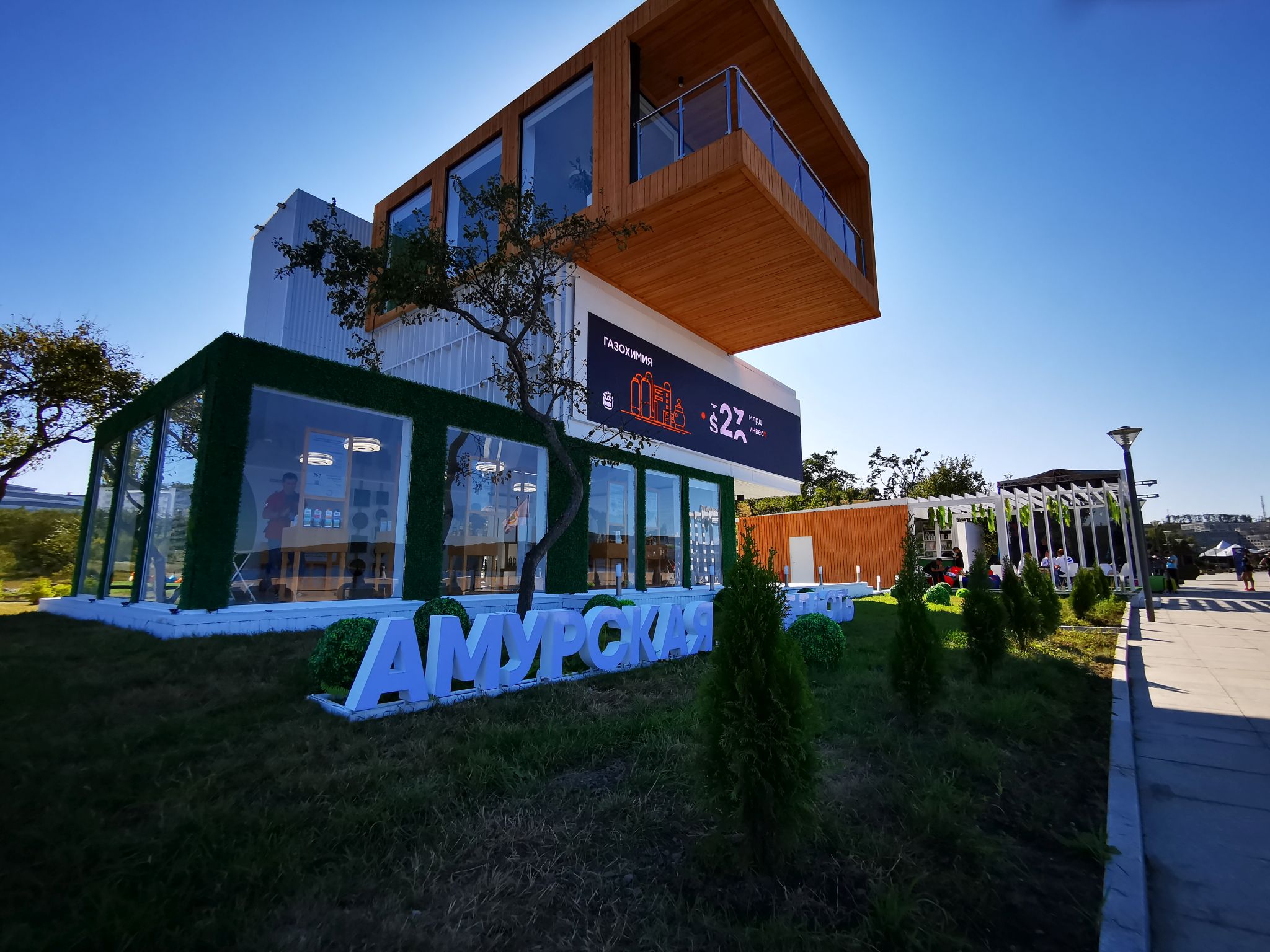 Earth, chemistry and space - these three words convey the essence of the exposition of the Amur region. The entire first floor is devoted to agriculture, the second tells about the Vostochny cosmodrome and gas chemical projects. But there are also hiking trails - they are discussed separately - especially about the first international cable car, the construction of which has already begun. 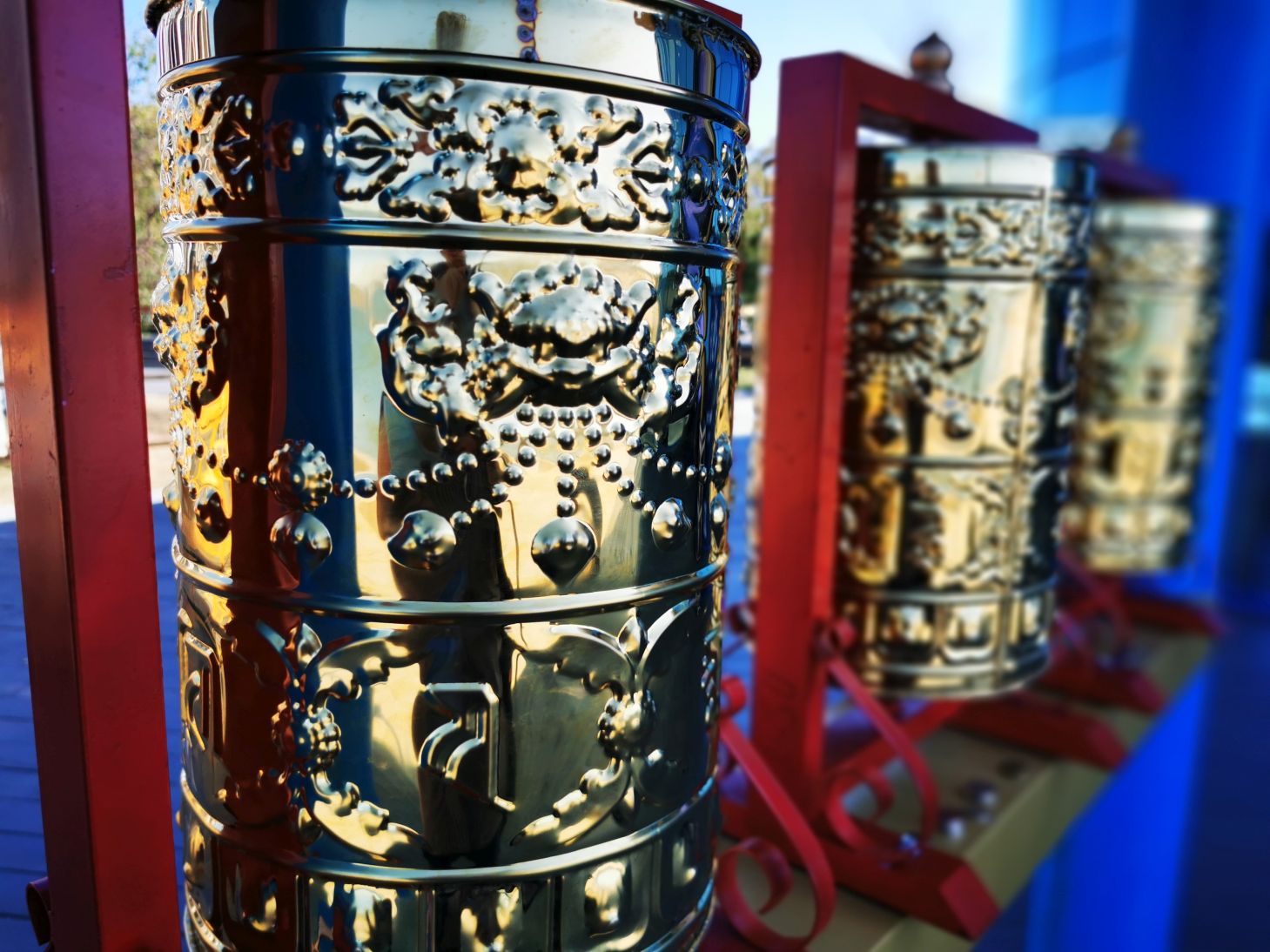 
The spirit of Buryatia penetrates into the guest of the streets of the Far East even before getting inside the pavilion of the republic - before the entrance the visitor is greeted with prayer drums "Khurde". Inside the cylinders there is a list with mantras, and if you start the rotation of each of them three times, the messages of the mantras will go to the world invisible to man, and he himself will increase his wisdom. How powerful the spirit can become is demonstrated by the demonstration performances of the masters of heer shaalgan - a traditional Buryat game, the external goal of which is to break the backbone of an animal by weight. 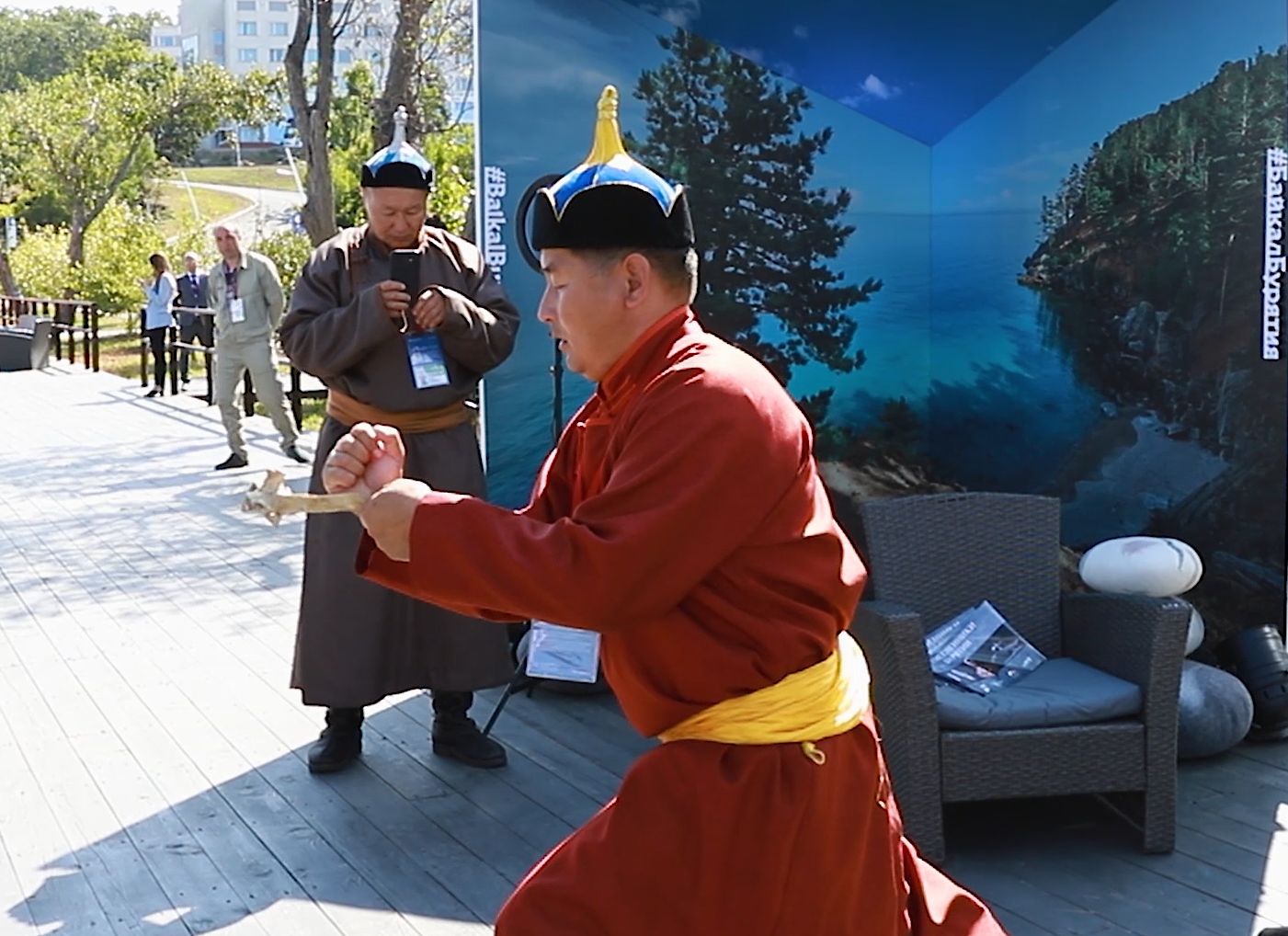 In general, heer shaalgan is one of the elements of upbringing the character of future men, the ability to concentrate, in addition, according to the beliefs of the Buryats, it is in the backbone that the soul of an animal lives. When the bone is broken, the soul finds its next rebirth, and the one who did this is considered to have done a good deed. 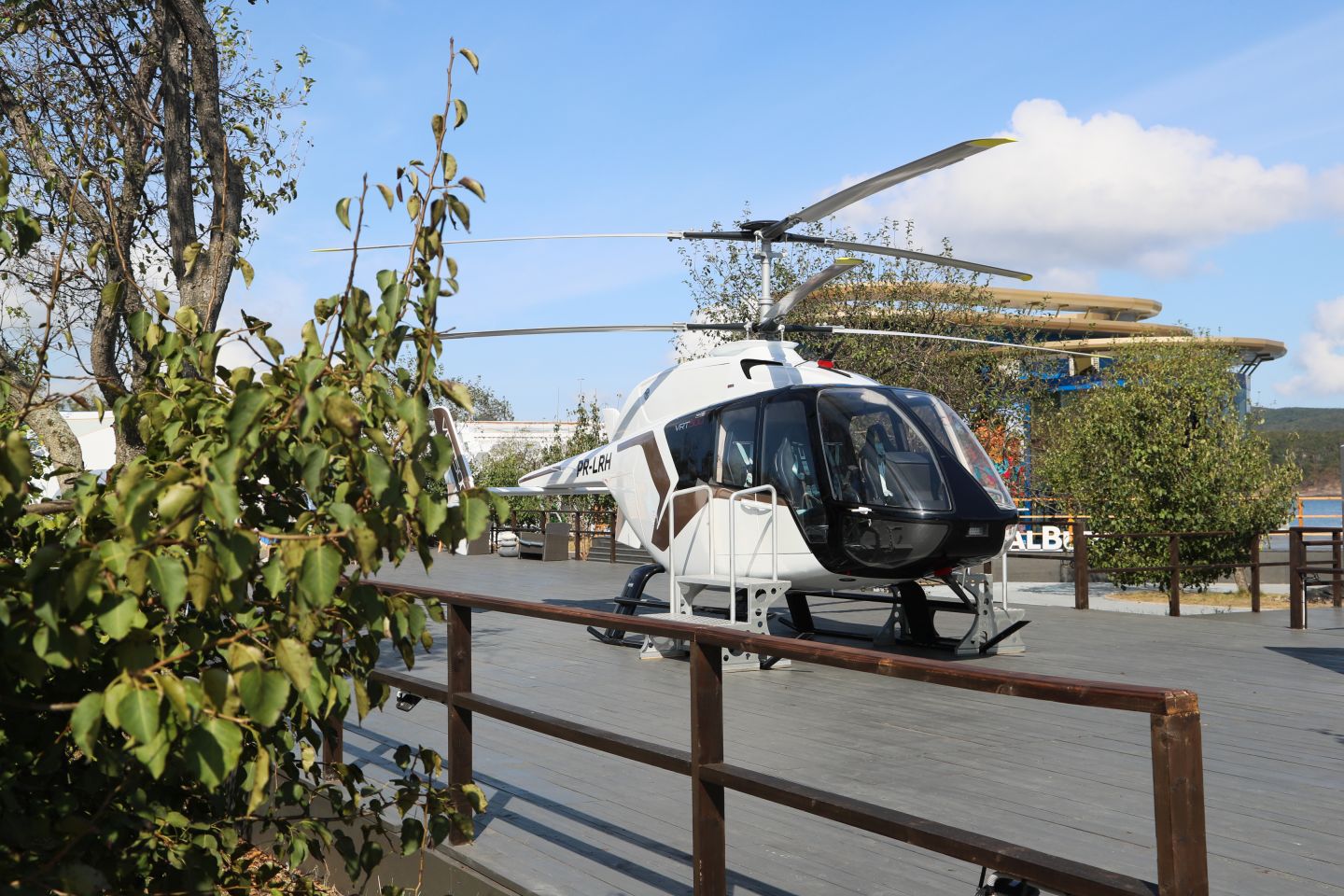 Just a stone's throw from the "roots" of Buryatia - its aspiration to the future - a light helicopter VRT500 with a cargo-passenger cabin for six seats. And the pavilion itself acquaints the guest with the widest tourism potential of the republic, investment projects and proposals.

The pavilion of the Jewish Autonomy greets with a rainbow - a heraldic symbol depicted on the flag of the region and traditional Jewish melodies. The rainbow means striving upward, growth and development - this year its original metaphor has become the Nizhneleninskoye - Tongjiang railway bridge between Russia and China, on which the laying of rails was completed in mid-August. A powerful transport, logistics and production complex may appear here. 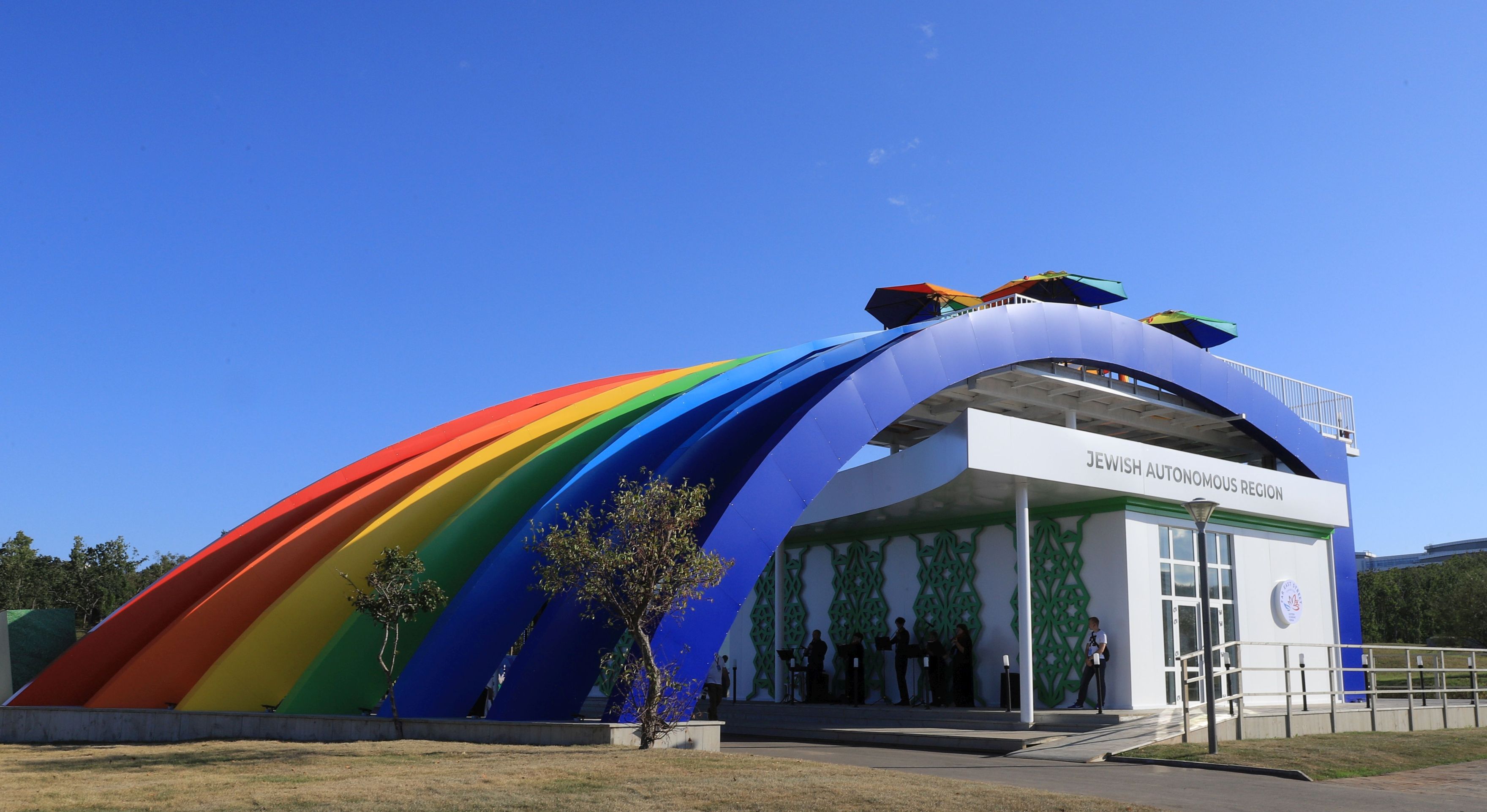 In addition to getting acquainted with investment projects and operating industries, guests of the EAO representative office on the Far East street can go on a gastronomic tour, the menu of which includes authentic hummus, gefilte fish and tsimmes. For a detailed recipe for tsimes, see our small video report.

The contours of the Transbaikalia pavilion refer to the peaks of the Kodar mountain range, and its colored edges symbolize the wealth of the local bowels. One touch to the touch panel and the visitor of the exposition receives detailed information about mineral deposits, the work of local mining and processing enterprises, and the healing waters of the region will help to quench not information, but quite ordinary thirst. The works of the Trans-Baikal sculptor Dashi Namdakov harmonize the overall impression of the Trans-Baikal exposition. 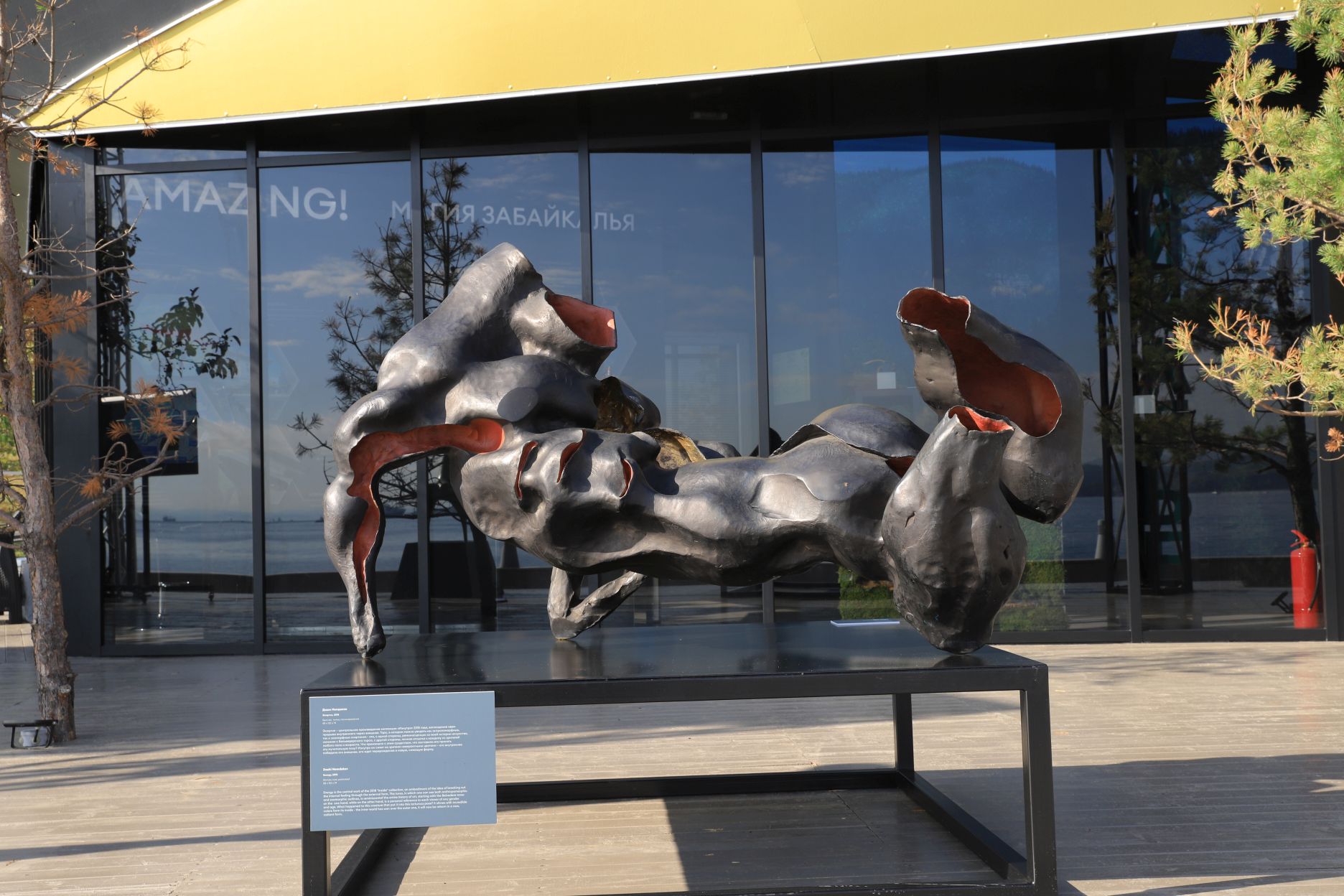 At first you can hear Kamchatka in the Far East, and only then you can see - the magic rhythm of tambourines is blocked by the cries of "seagulls" - girls performing a traditional dance. The pavilion itself is made in the form of a stylized volcano - as a reflection of the power of the region. 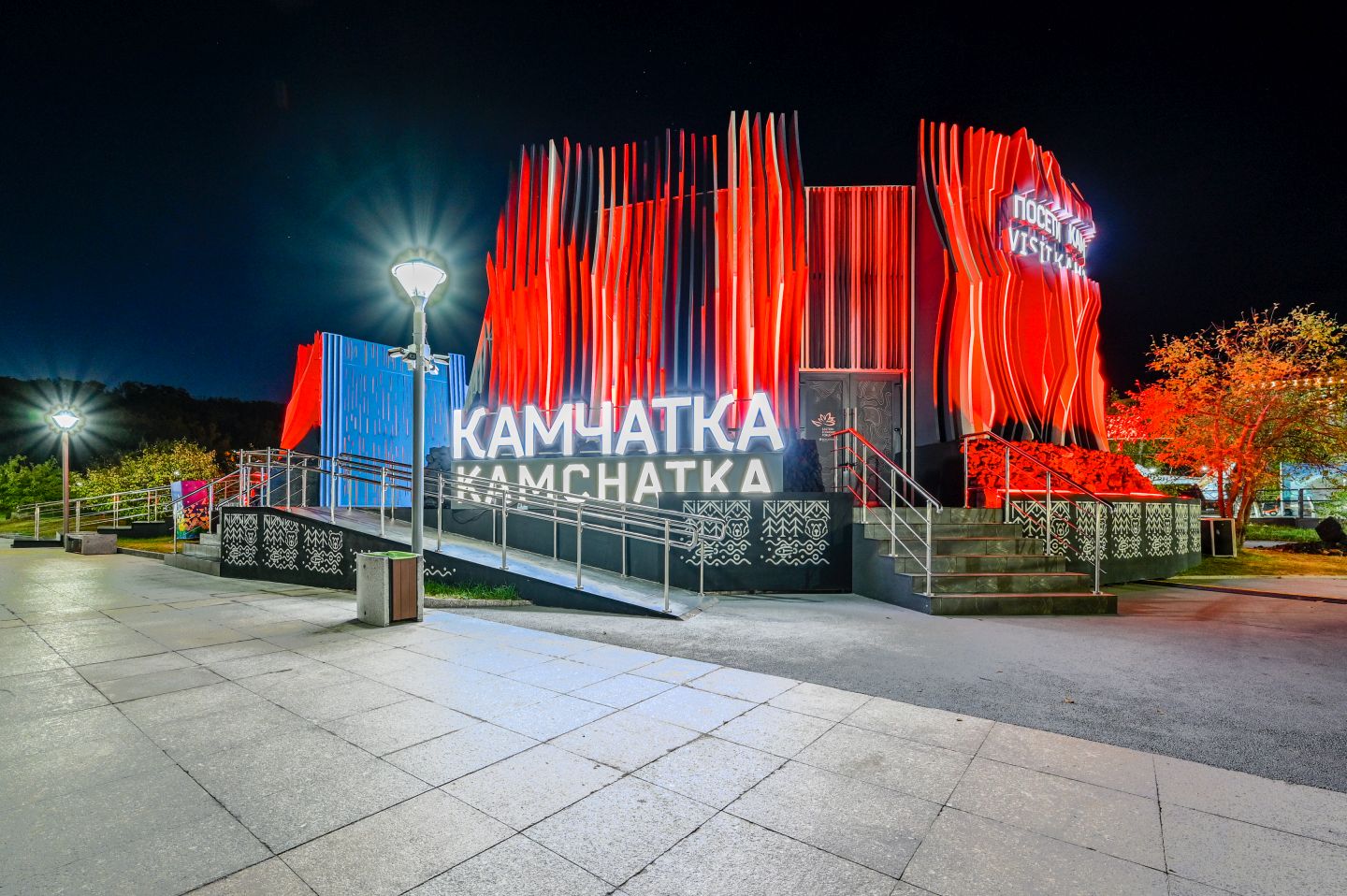 It plays out the main trump card of the peninsula - the uniqueness of the local nature, which like a magnet attracts lovers of space landscapes, and connoisseurs of observing wild animals and extreme lovers - skiers and snowboarders. “Kamchatka is volcanoes, salmon, bears, geysers. And what is unique is that everything is collected in one place, - says Alexander Zhuravlev, director of the Kamchatka Exhibition and Tourism Center, - if you go to Iceland, you will see only geysers and volcanoes, if you go to Alaska, you will see salmon and bears , and only in Kamchatka - I repeat, you will see everything at once! "

It is difficult to look at the pavilion of the Magadan Region in sunny weather with the naked eye - without sunglasses. It is made in the form of a structure of gold bars and with its brilliance attracts everyone who finds themselves in the zone of its attraction. 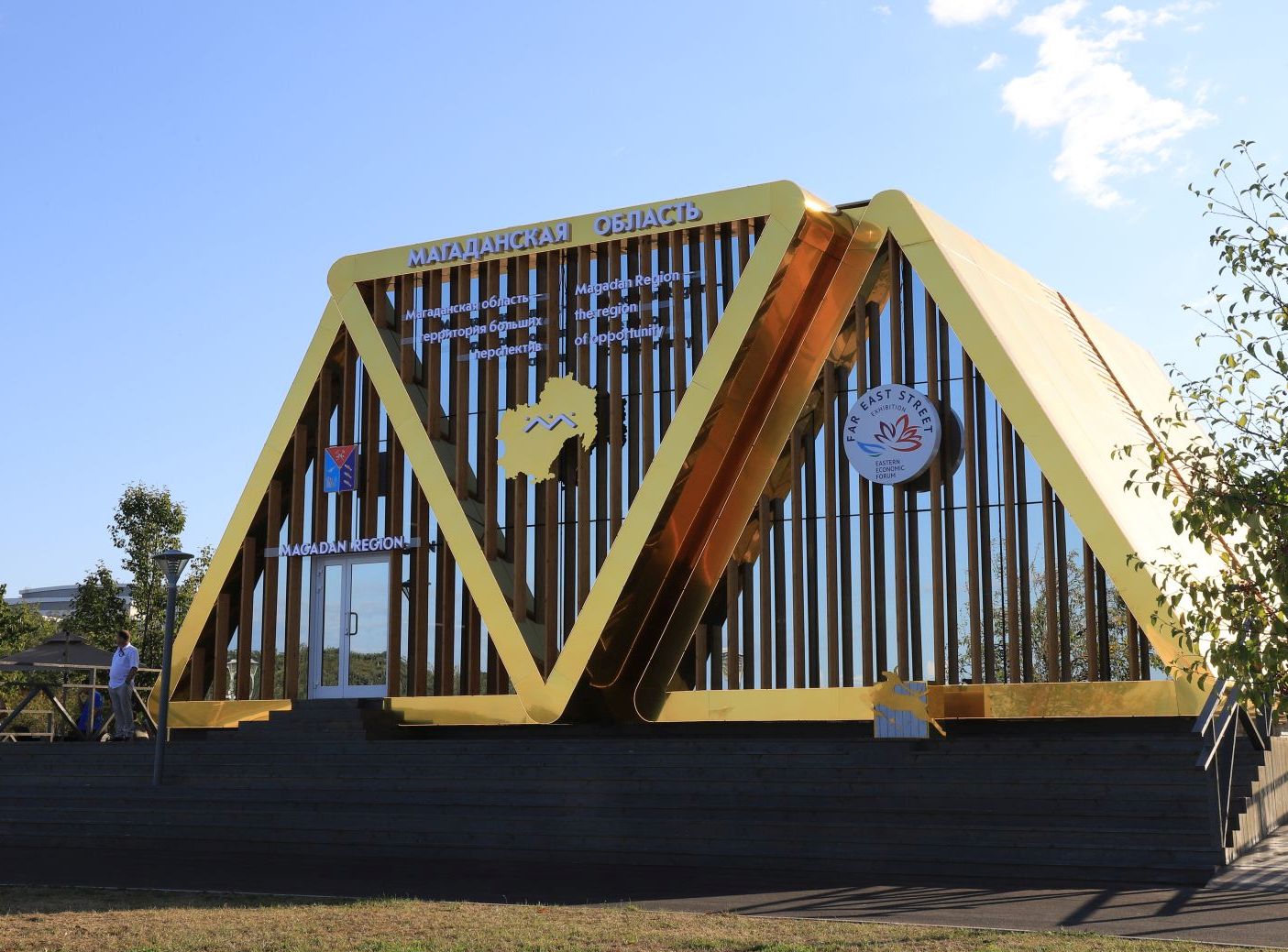 The main symbol is the golden triangle, it is not only a hint at the material wealth of the Kolyma. The golden triangle symbolizes the union of body, soul and spirit. This figure was taken as a basis as a national ornament, which is used in the embroidery of the Evens, Koryaks, Chukchi and other peoples living in these lands. In addition to enriching information and culture in the Magadan pavilion, you could learn your prospector's luck by taking part in a master class on gold washing. 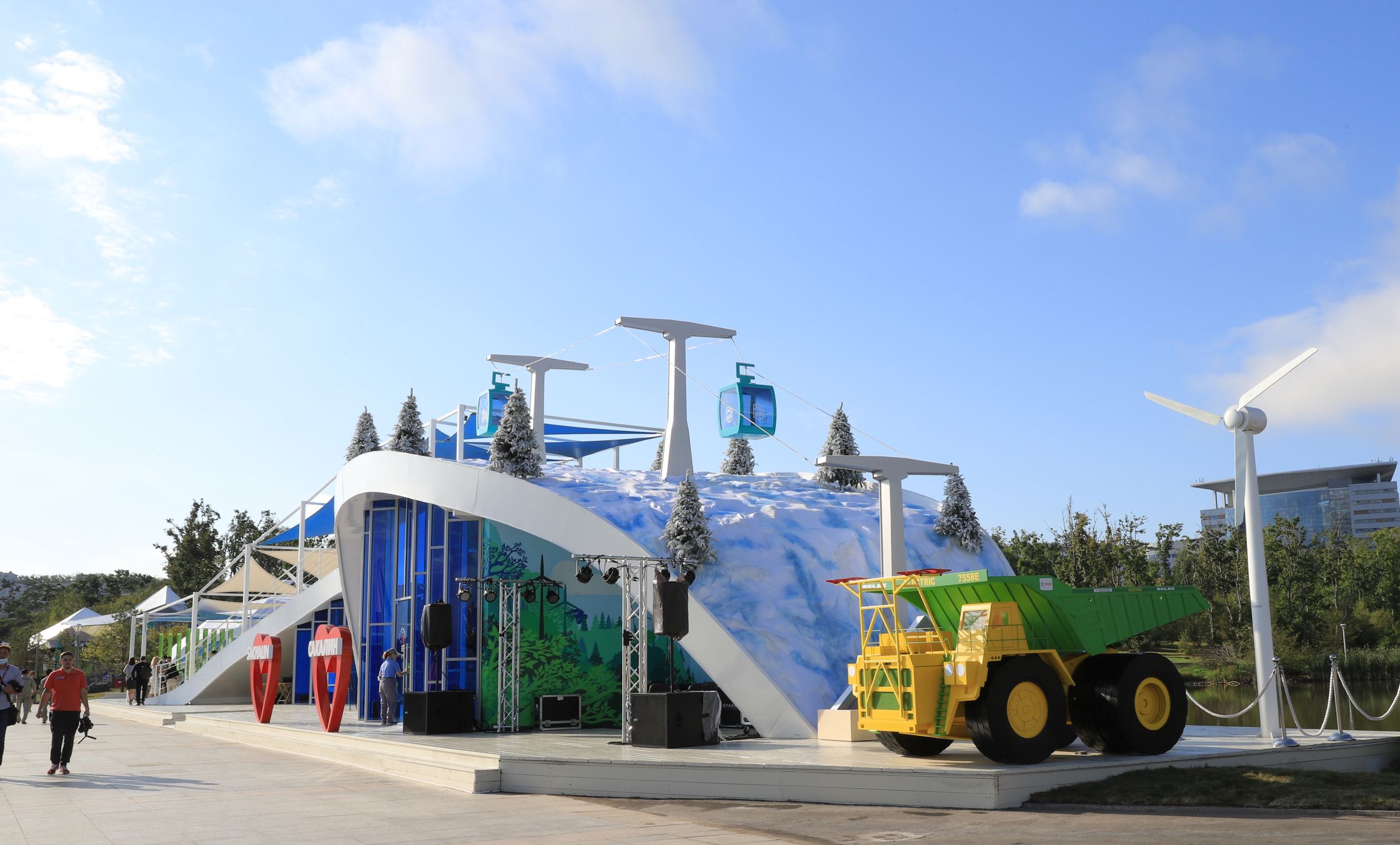 "Green business - green islands!" - the motto of the Sakhalin pavilion. Designed in the form of a ski jump, it is divided into six thematic zones and tells about the socio-economic development of the region and national projects, about the Smart City and digitalization, about investment opportunities, about a pilot project of carbon neutrality and alternative energy projects and the hydrogen cluster. The fifth zone is dedicated to the oil and gas industry. Sixth - the development of the Kuril Islands. 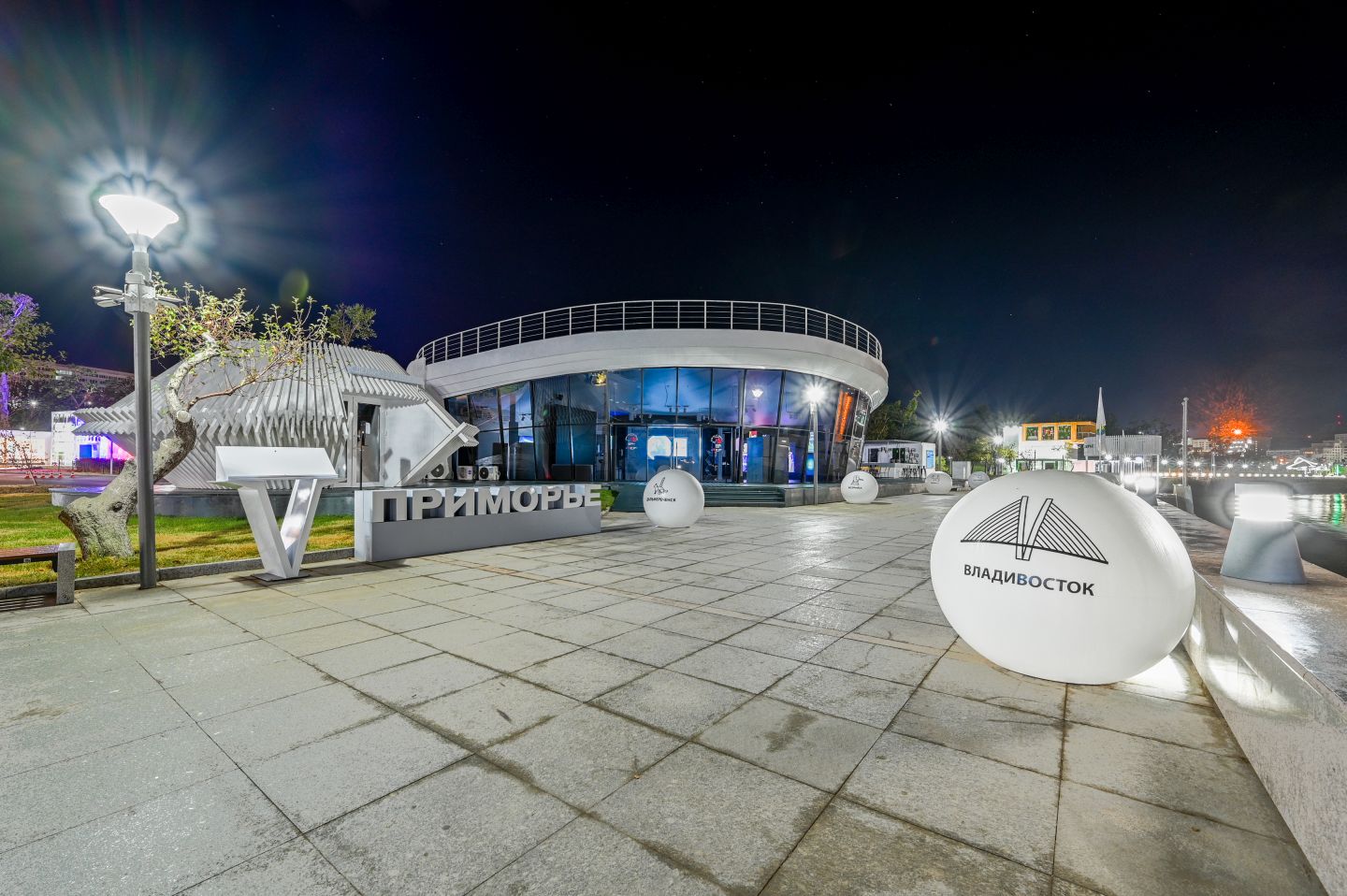 The appearance of the pavilion of the Primorsky Territory - the hospitable hosts of the Eastern Economic Forum - has not undergone external changes and still refers to the seashell, but the internal content and concept have changed. The main focus is on logistics. The exposition is called "International Terminal", indicating that Primorye is the main logistics hub of the Far East and a promising tourist region. The entire pavilion is divided into separate terminals - in Terminal Primorye everything about the transport routes of the region, the future of Vladivostok airport, Transsib, the Northern Sea Route, Vostochny port and other transport and logistics projects. 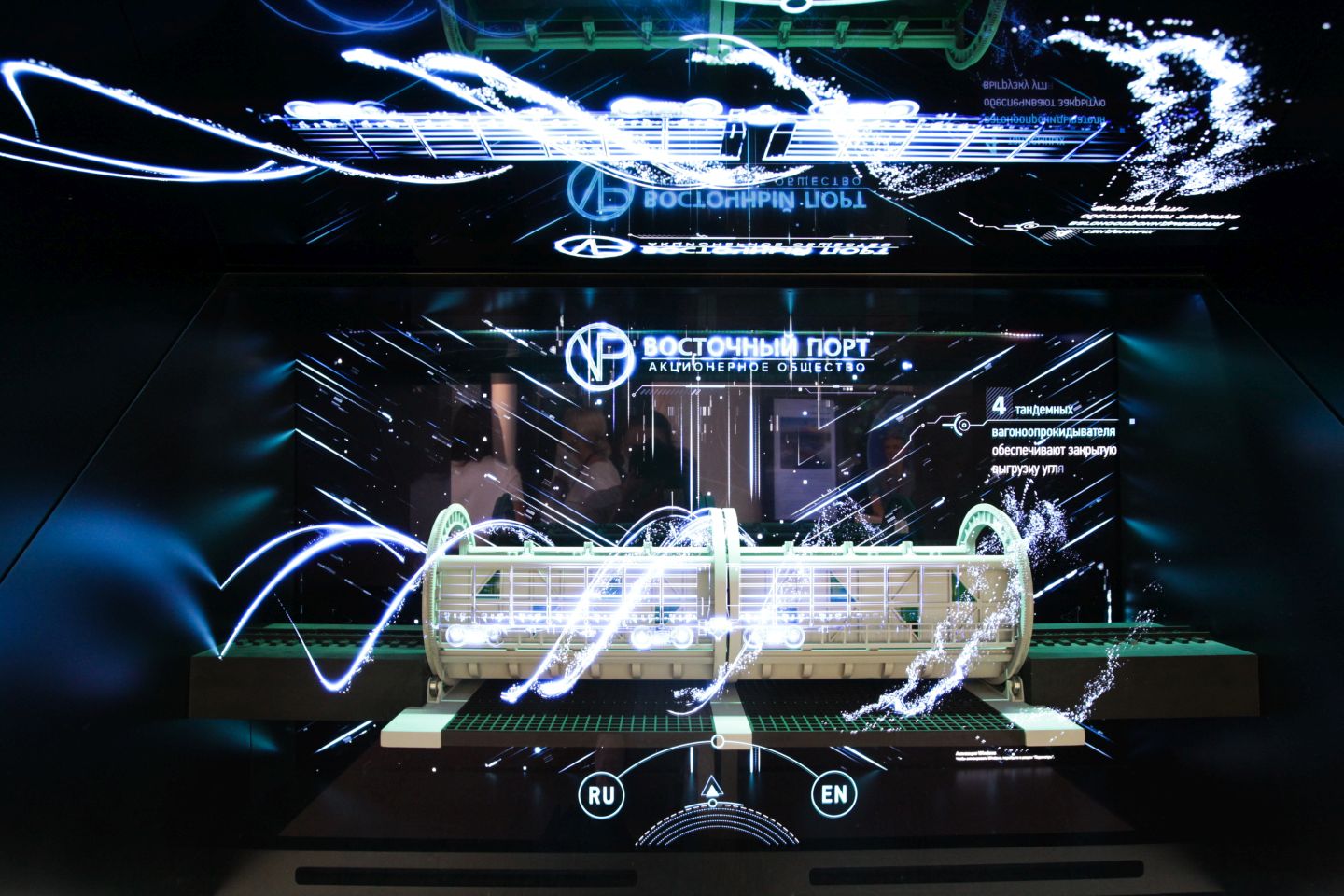 Large-scale construction projects in Vladivostok are presented in the Development Terminal. In Innovations Terminal - high-tech production facilities on the territory, in the Arseniev Terminal an interactive space of the Udege people has been created, right there you can see a multimedia presentation and films about the famous traveler Vladimir Arseniev dedicated to the 150th anniversary of his birth. In a separate showroom “Made in Primorye”, guests will find souvenirs, honey, sweets and designer clothes from local producers under the brand “Made in Primorye”. 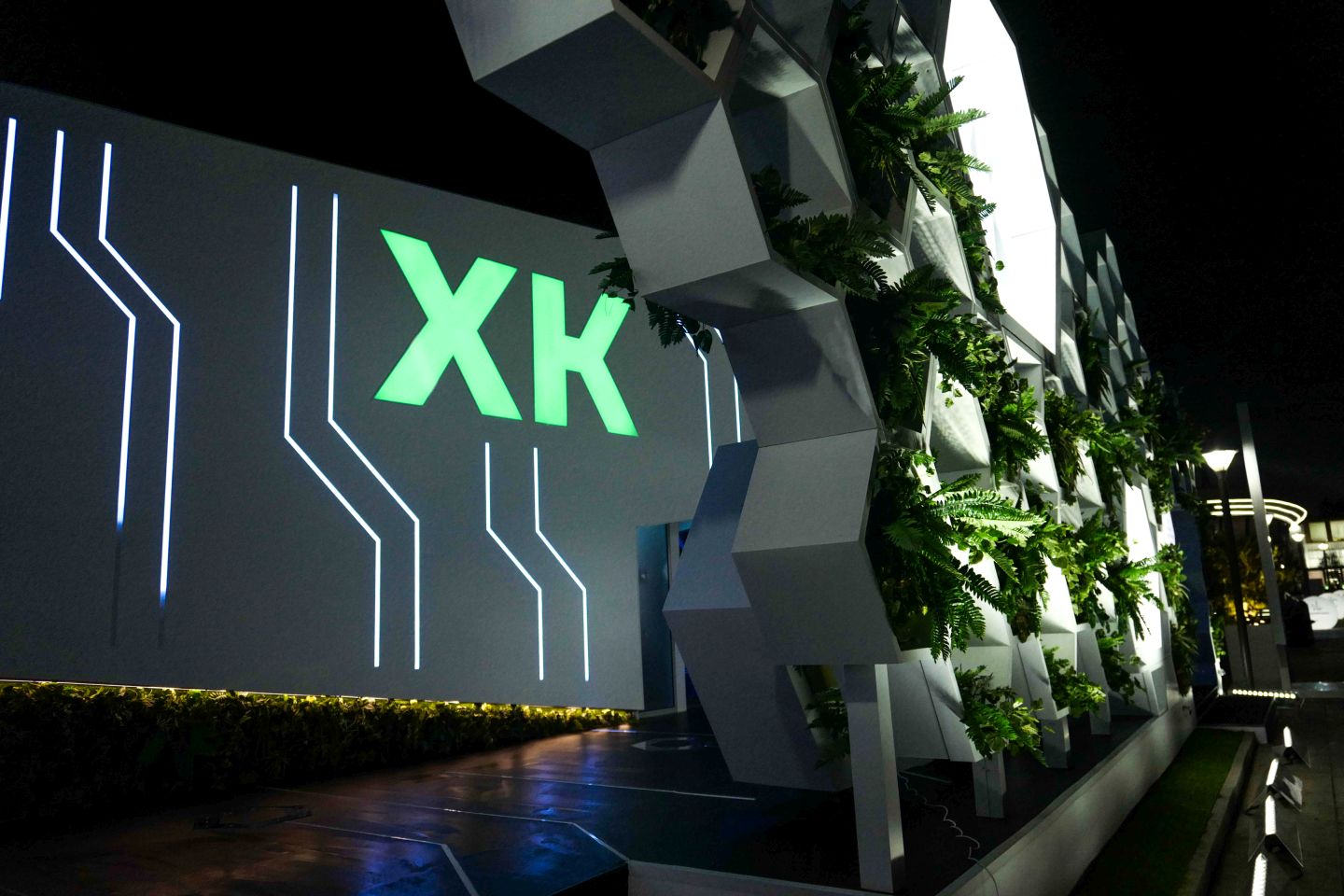 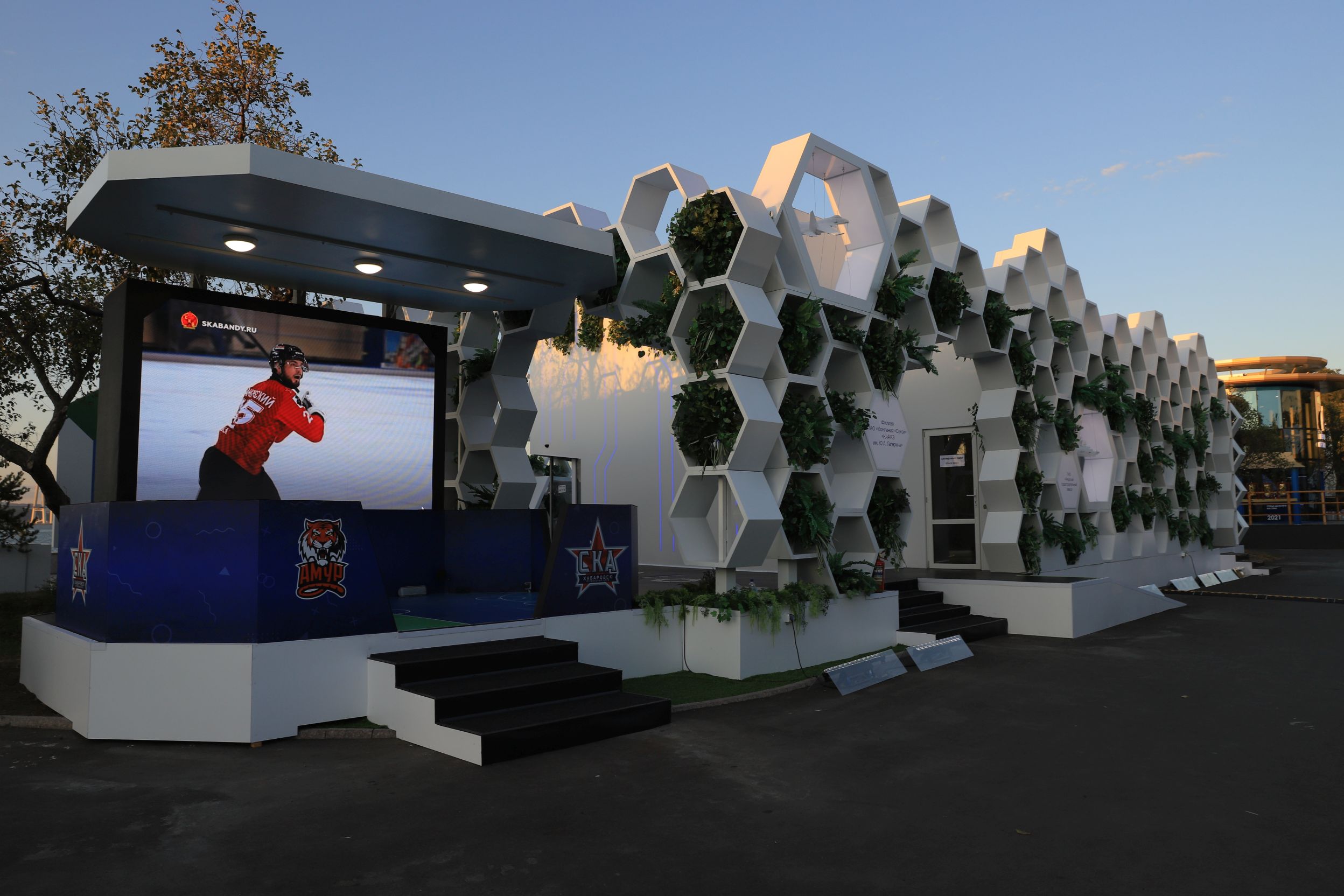 Having received food for the imagination and exercise for the mind, the guest can play ball hockey - but not with a stick and on the ice, but at a special stand, armed with a tablet with a special program.

The heart of the pavilion of the Republic of Sakha (Yakutia) is an art object in the form of a stylized Aal Luuk Mas - "Great giant tree" - a symbol of the trinity of the world. 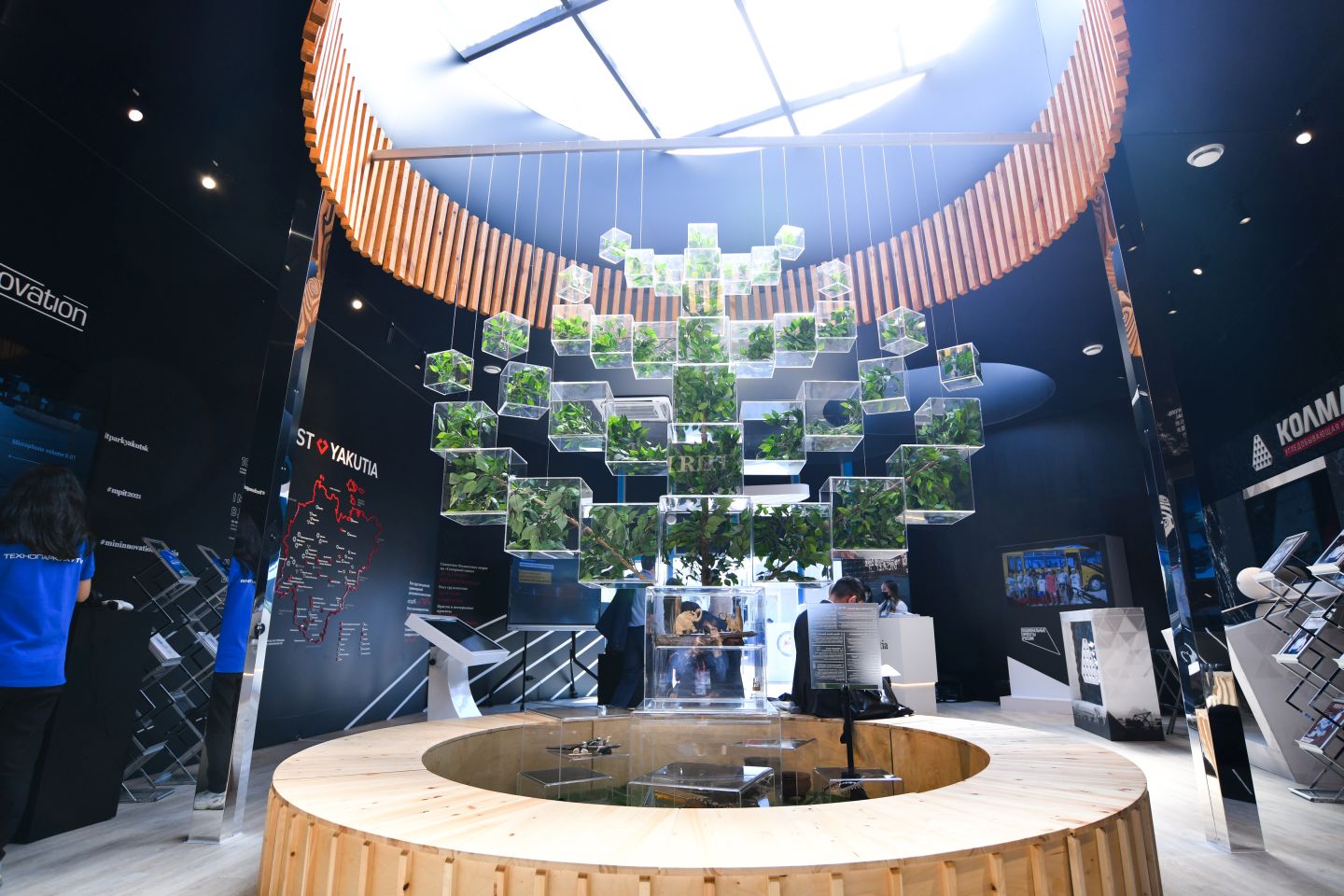 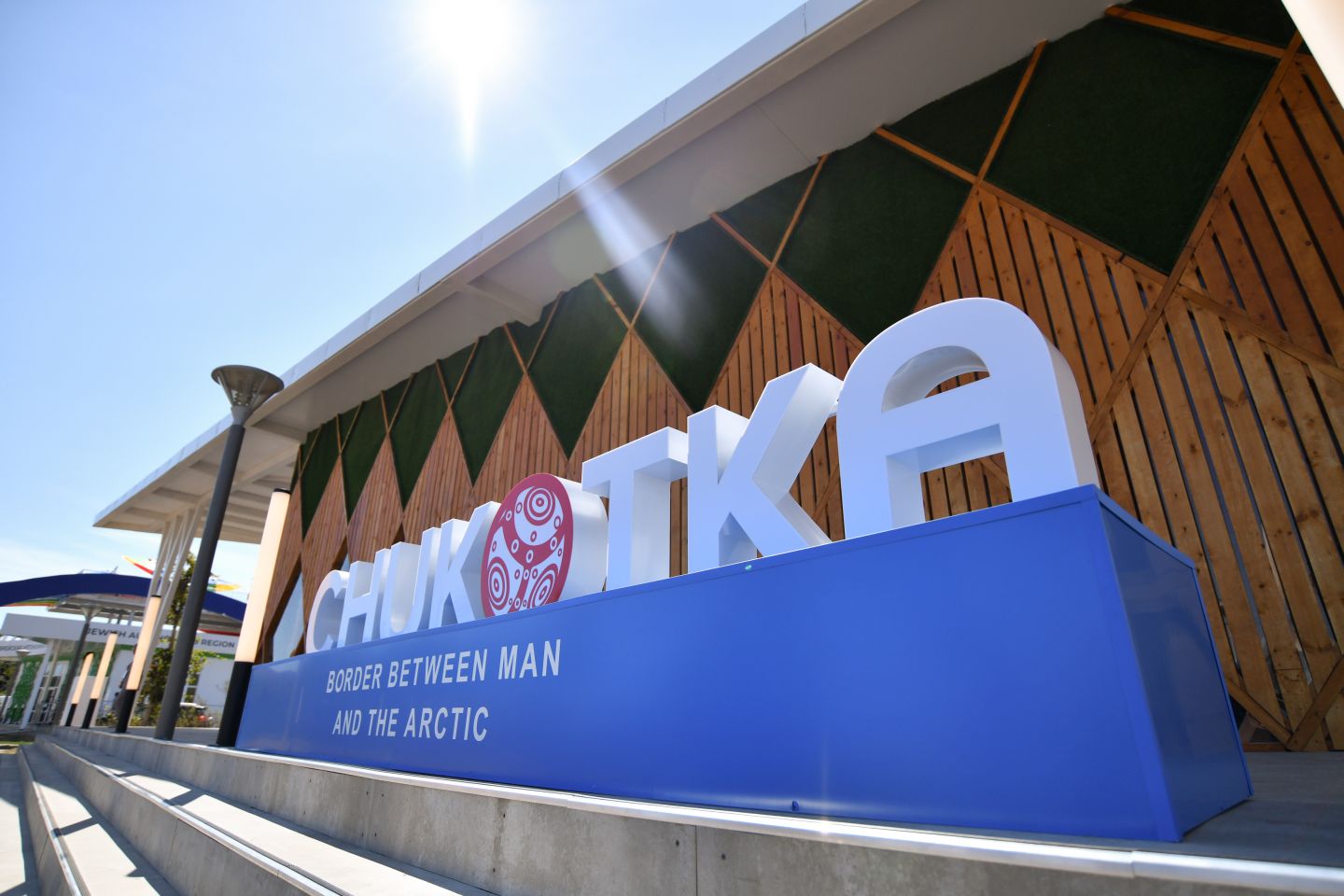 The Chukotka pavilion refers to the Arctic theme. The structure of metal, glass and wood resembles both an icebreaker and an iceberg. But at the same time it is divided into two parts: the ice of the Arctic and the green flora of Chukotka. Next to the pavilion is a copy of the lighthouse at Cape Dezhnev. In the neighborhood, artists of the Ergyron ensemble perform on the stage, and there is also a souvenir zone where visitors can buy products from the Uelen bone carving workshop or the works of the Providence bone carver Alexander Kilasov, which he sells himself. You can also buy traditional crafts of Chukchi craftswomen from leather and fur. 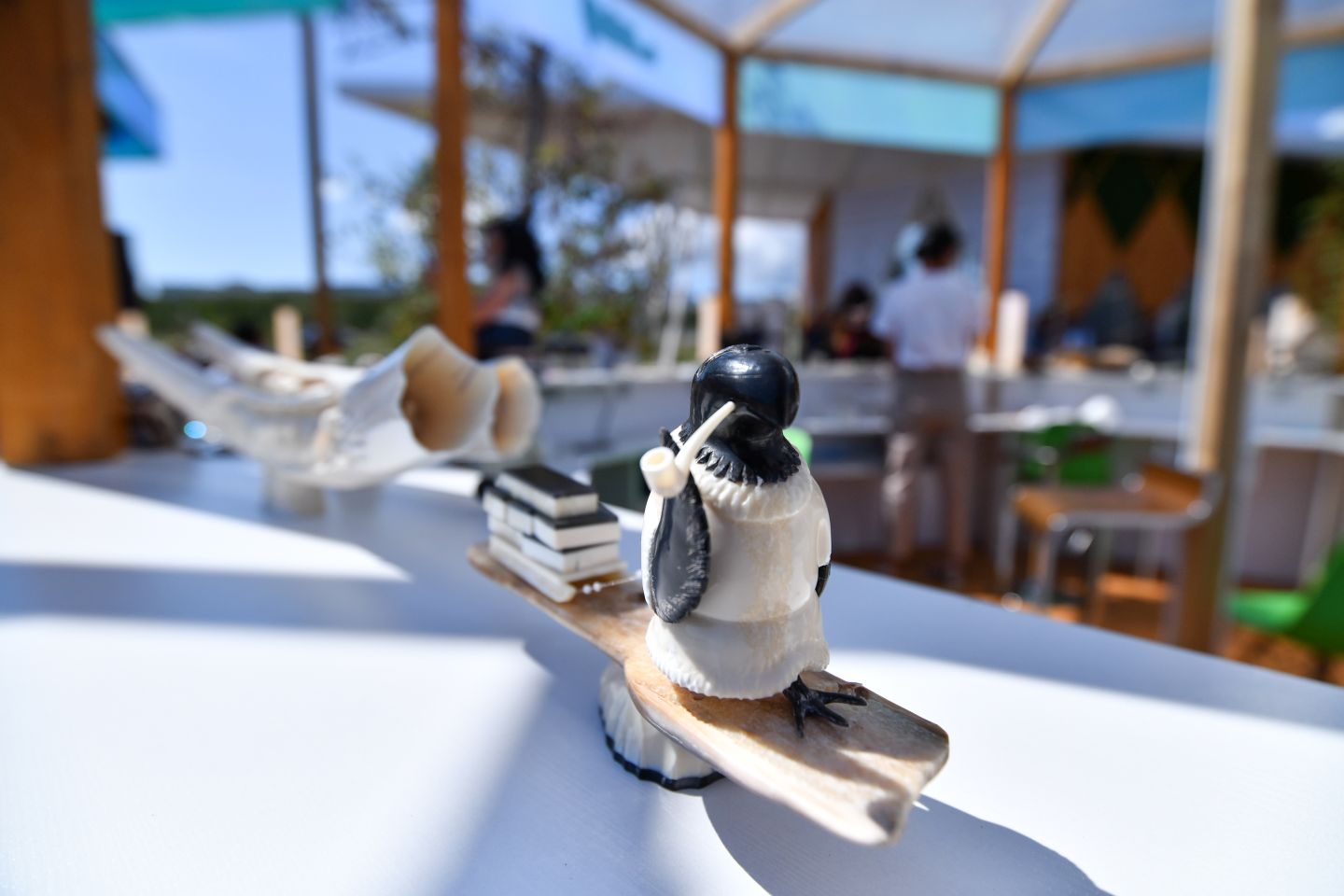 Chukotka, Kamchatka pavilions and a number of others will not be dismantled after the EEF. They will be left to work after the EEF to "revitalize" the FEFU embankment. They will be transferred to the management of the Directorate of Public Spaces in order to use them for leisure and comfortable pastime. The pavilions will house cafes, rentals, entertainment areas - now possible options for leisure are being considered, so that those walking along the embankment have a choice of how to relax here.

Few photos, want a video? Welcome to small a walk along the streets of the Far East!