Budgets of the Far East 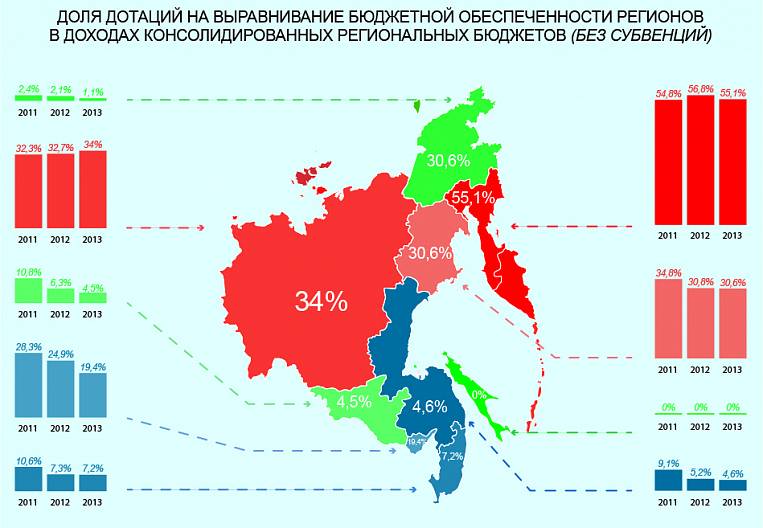 Not long ago, the Ministry of Finance of Russia published data on the execution of regional budgets for 2013 a year, which gives occasion to look again at the current situation in the budget sphere of the DFO regions.

It is often said that regions are subsidized, meaning it is dependent on federal support, but we must bear in mind that in fact subsidies are one of the types of transfers, and there are also subsidies, subventions and so-called other transfers. Subventions from consideration are usually excluded (by deducting them from both regional budget revenues and the total amount of transfers) - these are funds credited to regional budgets for the implementation of federal powers transferred to regions. The amounts of subventions are determined on the basis of the need for funds for the exercise of such powers and without taking into account the degree of well-being of the regions, and, thus, donations are not relevant. After subtracting subventions, the volume of non-earmarked transfers (subsidies) and earmarked (subsidies and other) are generally comparable.

Table 1. Dependence of the Far Eastern regions on federal transfers

The obtained results make it necessary once again to state that the constituent entities of the Far Eastern Federal District are very different in their current economic situation and, as a result, in the state of the public sector. The Sakhalin region, which since 2011 has ceased to receive subsidies for leveling fiscal security, stands out sharply for the better. Khabarovsk Territory also fell into regions with low subsidies - up to 20% - before 2013. The threshold in 20% is not accidental, since the Budget Code of the Russian Federation establishes certain restrictions for regional authorities depending on the degree of their subsidies (up to 5%, from 5 to 20%, from 20 to 60% and above 60%). From the Far Eastern regions, the Kamchatka Territory is among the most highly subsidized, and the Russian Ministry of Finance has counted only 7 (including Kamchatka) in the last three years.

The significant increase in subsidies in 2013 in the Amur Region, Khabarovsk Territory, and the Jewish Autonomous Region was undoubtedly affected by a large-scale flood, more specifically, the allocation to the regional budgets of significant federal financial assistance for the liquidation of its consequences.

The high level of subsidized regions can be explained by different reasons. One of them is the wrong organization of inter-budgetary relations, in other words, excessive centralization of revenues collected in the territory into the federal budget. Statistics of the Federal Tax Service allows us to test this hypothesis: it shows how much tax and non-tax revenues were collected in each of the regions, and how much of this money went to the federal budget. So, to the overwhelming majority of the Far Eastern regions of the Russian Federation, no reform of intergovernmental fiscal relations will not help without federal transfers. Only from the Sakhalin region to the federal budget took more money than later returned in the form of federal transfers (subventions are still not taken into account). At the same time, the volume of transfers was about 10% of the volume of revenues received in the Sakhalin Oblast from the Sakhalin Oblast in 2011 and about 20% in 2012-2013. Moreover, in the Khabarovsk Territory, the same indicator was 92-95% in 2011-2012 years (that is, transfers were less than federal revenues in the territory), but in 2013 the situation changed. For all other subjects of the Federation, the amounts of transfers they receive from the federal budget are times and even dozens of times higher than the revenues of the federal budget collected on their territory. This means that even if all tax and non-tax revenues collected in the regional budgets remain in the regional budgets, it will still be necessary to add funds, and considerable, from the federal budget. For comparison: on the national average, 29% of tax and non-tax revenues of the federal budget in 2011 year, 26% in 2012 year and 23% in 2013 were sent to regional budgets in the form of transfers (without subventions).

We can still assume that high subsidization is associated with poor collection of income in the Far East, but this is also not the main reason. The Federal Ministry of Finance, distributing subsidies for equalization by regions, proceeds not from actual incomes and expenditures of regional budgets, but from the tax potential and expenditure requirements of the regions from which their level of budgetary provision is composed. For the Far Eastern regions, with the exception of the Sakhalin region, this level is estimated as low, especially in the Kamchatka Territory. Although, of course, it can not be denied that there are reserves for increasing the collection of incomes in all regions of the country.

Therefore, the main reason for the high subsidization of most of the Far Eastern regions, as well as the differences between them, is the prevailing economic situation, which is determined by a combination of a number of objective factors that are by no means always favorable. This is a small capacity of the domestic market; the deep (non-coastal) position of some regions, which reduces their attractiveness for the development of foreign economic relations; severity in much of the climatic conditions; Far from universal availability of minerals, which are often developed in unfavorable natural and climatic conditions; A low level of development of transport infrastructure, including the lack of railways in the Magadan Region, Kamchatka and Chukotka; specialization in problem industries.

The budgetary well-being of the Sakhalin region, of course, is primarily associated with the development of the oil and gas complex - in 2012, mining gave 62% of the region's GRP. In a relatively favorable position, the southern and having access to transport routes Khabarovsk and Primorsky Krai, Amur region. At the same time, the Khabarovsk Territory stands out among the Far Eastern regions with a high level of development of the manufacturing industry, moreover, Khabarovsk performs the role of an administrative, cultural center of the Far East. On the contrary, the fishing industry plays a key role in the economy of the Kamchatka Territory, where, as is well known, many problems still remain, and transport isolation and northernness restrain the development of other industries. The same factors play a role in the Magadan Region, with the only difference being that mineral extraction, including gold mining, plays a significant role in it. The severity of the climate, the transport incoherence of a vast territory also leads to a high subsidization of Yakutia, even despite its raw materials specialization. Although Yakutia can at least partly repeat the fate of the Sakhalin region due to the further development of the Talakansky oil and gas field and other fields of various minerals.

Prospects for the development of the Far Eastern regions will largely be determined by the same factors as their current situation, and also whether federal and regional authorities will be able to find possible growth points for territories where the deterrent role of negative objective factors is great. It is clear that when creating the conditions for the development of a manufacturing-oriented APR manufacturing industry, the first candidates to locate factories are the Khabarovsk and Primorye Territories. Most of the regions will have to solve a much more complicated task of searching for and developing those types of activities, specialization on which is possible in their conditions. In the same Kamchatka region, it is necessary to create conditions for the successful development of the fishing industry, because fish resources are the competitive advantage of the Far East. In the non-primary sector, the construction of the Vostochny cosmodrome in the Amur Region can be considered a successful example, in our opinion. However, the answer to the question of what can be developed in the Far East, in the coming months, promises to give the Ministry of Regional Development of Russia within the framework of its work to identify promising areas of advanced social and economic development.

Returning to the budgets of the Far Eastern regions, it should be noted that in most of them the situation with a deficit and debt is no worse than the national average (the growth of regional and municipal debts has recently become one of the most discussed topics). If in the whole country regional budgets according to the results of 2013 year were reduced with a deficit of 7,3%, on average in the Far Eastern Federal District - 6,1%. But according to this indicator the spread of certain constituent entities of the Federation is colossal (table 2). If the budget of the Kamchatka Territory turned out to be a little surplus, the Chukotka Autonomous District became the all-Russian "leader" in terms of the deficit with the indicator in 34,3%. As for the ratio of regional and municipal debt accumulated at the end of 2013 and the annual receipt of tax and non-tax revenues, the dependence on the economic situation in the regions is more obvious, although much depends on the policy of the authorities in the field. The smallest debt load in the Sakhalin region, the largest - in the Kamchatka Territory and Yakutia.