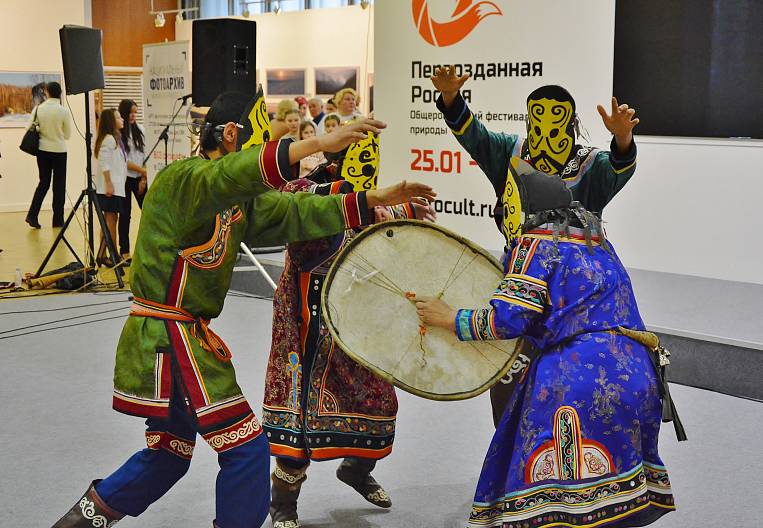 In Moscow, at the All-Russian Festival of Folklore and Nature "Primordial Russia", the Udege group "Su gagpai" from the Khabarovsk Territory performed. The head of the traditional culture department of the Regional Scientific and Educational Creative Association of Culture of the Ministry of Culture of the Khabarovsk Territory, Nadezhda Kimonko, discusses whether the voice of the Far East was heard in the capital.

- What activities are being conducted in the Khabarovsk Territory to demonstrate the activities of the communities of the small indigenous peoples of the North?

- The Department of Traditional Culture of the Regional Educational Scientific Creative Association of Culture conducts the summer shift "Amur's Children: Life and Creativity" for children's creative teams, arts and crafts studios, sections on national types in the places of compact residence of indigenous small peoples of the North of the Khabarovsk Territory Sport.

Annually during 10 years in the municipal districts of the region there is a festival-relay race of folklore and ceremonial holidays "Tambourine of Friendship". Last year it was organized in the rural settlements of Bulava and Bogorodskoye Ulchi municipal district of the Khabarovsk Territory. Such kind of events are held in the most remote areas and villages, where work to preserve the sources is not conducted or is only being revived. So we bring to this case the executive authorities of the municipal districts, and the public organization of the indigenous small-numbered peoples of the North of the Khabarovsk Territory. Every year the festival expands its geography, visitors come to us from the Republic of Sakha (Yakutia), the Amur Region, the Chinese People's Republic. The process is in progress: for groups, stage costumes, props, national tambourines are purchased, repairs are carried out in rural cultural houses, national cultural centers, new collectives and cultural and leisure establishments are created. Positive shifts are evident.

- Ensemble "Su gagpai", which performed in Moscow as part of the presentation of the Khabarovsk Territory at the exhibition "Primordial Russia", also supports the traditions of small peoples. Tell us more about it.

- Many of our teams are over 60 years old. Creative groups of indigenous small-numbered peoples of the North are a kind of stabilizing cell in the environment of a rural settlement. The Udege ensemble "Su gagpay" from the taiga village of Gvasyugi of the Lazo district has not been to Moscow for a long time. He often came here in the 1950s-60s to perform at the All-Union Congresses. "Su gagpai" translated from Udege means "Rays of the sun". The permanent leader of the group is Valentina Tunsyanovna Kyalundzyuga, laureate of the Russian Federation Government Prize "Soul of Russia" in the nomination "folk storyteller". The guys - a permanent group of 10 people - perform at regional holidays, festivals, including in European countries. The leader went as a bearer of folklore to the International Festival of Storytellers, held in the Yukon province (Canada), where she told Udege tales.

Udegey folklore is interested in scientists - ethnographers, ethnomusicologists - not only from Russia, but also from other countries - Japan, Canada, Poland, South Korea, America. In Poland, the Udege-Russian dictionary (2 volumes) was published, in Canada "Udege fairy tales", in Japan Exupery "The Little Prince" (translated by VT Kälundzyuga). Valentina Kälundzyuga is the author and developer of the Udege alphabet. Now she is working on the publication of textbooks on the Udege language for primary classes. I sometimes get the feeling that people abroad know more about us than in our country.

- Who sews such beautiful costumes to artists?

“The costumes are sewn by themselves, they are traditional and combine embroidery, applications from fish skin using metal elements, shell-kaori. The most interesting gowns from fish skin. By tradition, they were worn in the spring, summer, and early fall. By the way, Amiri wedding clothes are also curious. At Nanai girl begins to sew a wedding gown from childhood. In general, any clothing of small nations is a talisman, the main property of which is to protect a person from evil spirits.

- Are there ethnographic villages on the territory of the Khabarovsk Territory, where one can get acquainted with the traditional way of life of indigenous small peoples?

- There are no ethnographic villages in the Khabarovsk Territory. Orochi, Udege, Nanais and other peoples live in ordinary wooden houses. In the Udege village of Gvasugi is located territorially- Neighbor community of small peoples "Ude", which deals with traditional activities: hunting, fishing, collecting wild plants, making products, souvenirs of decorative and applied art. Under the Ude community there is a national cultural center with an open-air museum, an exhibition of household goods, arts and crafts, premises for master classes and performances of a folklore ensemble. In the open-air museum, ritual ceremonies of the Udege are held.

- Indigenous peoples still try to live apart? Or the impact of civilization is still great - do young people leave for the city and forget their roots?

- I want to note that eight indigenous small peoples live on the territory of the Khabarovsk Territory: Nanais, Negidals, Nivkhs, Orochi, Udege, Ulchi, Evenki, Evens. Total 22549 people (data for 2010 year). The most numerous are Nanais-11009 people, small ones - Udege (620 person), Negidals (480 person) and Orochi (441 people). In terms of the number of indigenous peoples, the Khabarovsk Territory ranks sixth in Russia.

Indigenous peoples live in remote villages and districts of the Khabarovsk Territory. Not in all settlements of the Khabarovsk Territory young people leave for large cities. Some, getting education in Khabarovsk, return to their native places. Young professionals are financially stimulated. For example, Marina Ychya, after receiving a second higher education in Moscow, currently works as a chief specialist in the administration of the Ulchi municipal district. Young people began to enter the Khabarovsk State Institute of Arts and Culture more often. After graduation, the specialists work in national cultural centers, inter-settlement centers of national cultures, rural houses of culture, etc. This is again connected with the fact that the Khabarovsk Territory has created a department for indigenous peoples' affairs under the Ministry of Natural Resources of the Khabarovsk Krai Government, departments in municipal administrations Areas. This is facilitated by the Regional Association of Indigenous Peoples of the North, the Regional Educational and Creative Cultural Union and other organizations. In the Khabarovsk Territory the state target program "Development of Indigenous Peoples of the North, Siberia and the Far East of the Russian Federation Living in the Khabarovsk Territory" was adopted. Of course, from the northernmost areas, and not all of them, from the Okhotsk region, for example, young people, having received an education, move to large cities.

- What traditions are important for small peoples to preserve?

- With the help of folklore, we would like to save our native language. In our Udege language (and I am Udegeika), young people barely speak, and the language loses a certain status. If young people do not see the point, then people of 40-50 years begin to realize that it is important to maintain their native language. The language preserves the culture and even saves in piquant situations when it is inconvenient to speak some words in society. Alive language - the people live. This is now followed by the smallest ethnic groups - the Negidals. In the Evenk village of Arka, Okhotsk District, almost all children in the school speak their native language.
We pay attention to traditions and rituals. They are used in certain localities. They say that the Orochi are an endangered people, but this is not so. People still identify themselves with their nationality, they have a desire to deal with their Oroch culture. They established an association in the Soviet-Gavan region - the national cultural center "Kia Khala" ("Native Land"). Of course, the Orochi no longer know their native Oroch language, but they sing songs, dances, and rituals. And while there is this desire - the people's roots will be preserved. Peoples are also reviving recipes for national cuisine. So, in Udege this is tala, which is made from raw fish, cooks a daktu - a thin soup of rice or millet, add the softened red caviar there (brewed 2-3 minutes with caviar).

- What rituals are preserved?

- Rituals more trade, associated with the traditional way of life - hunting, fishing, gathering. Before going hunting, men, even young ones, near the sacred tree, ask God Enduri to bring good luck, make an offering, thank the spirits of the taiga, mountains, forests, rivers. There are such signs among hunters as well: if a person finds a frog, a snake, a butterfly in winter, it means that luck has come to you in hunting. We must take a sacred souvenir for ourselves, hide it and not show it to anyone, otherwise luck will pass to another hunter.

The culture of the indigenous minorities of the North is connected with the notions of the animal world. People believed that a person comes from a beast or a bird and that animals understand everything, can be reborn after death and even avenge the killing of a relative. That is why on many holidays, rites were always held to remove guilt for killing the beast. Tigger as the owner of the taiga, places are also given in legends. According to one Udege legend, two hunters decided to get the eagle chicks in the taiga. They climbed high on the rock, but could not get down. Men turned to God for help - no one knew where the tiger came from and helped hunters get off the cliff.

In the Nanaian legend, hunters have lost their way in the taiga. Hungry and tired, they turned to the spirit of the tiger for help. Suddenly a tiger appeared from the thicket with roe deer. The beast threw roe deer to the hunters and disappeared. The hunters recovered and found their way to the village.

- You said that various laws are being adopted that contribute to the development of the indigenous peoples of the Khabarovsk Territory. In this regard, has the demographic situation changed in recent years?

- Of course, the number of our peoples is not growing as fast as in other ethnic groups. We do not have a high birth rate, as before, when there were 5-6 children in families. But we hope that demographic programs will help improve the situation. And this is important. I would like our people to develop to have more initiative leaders. To do this, we are carrying out the shifts "Amur Children" in summer camps for teenagers and youth, where we collect all the "aboriginals" of Khabarovsk Krai so that young people are engaged in this direction, could develop their economy in the countryside and understand that the future depends on them.