Blokchein-investors - they and we did not have enough? 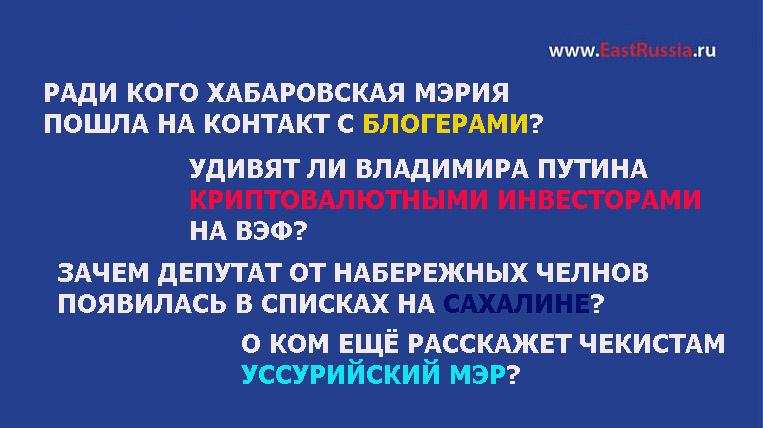 According to rumors, President Vladimir Putin and all participants of the third Eastern Economic Forum, which will be held in Vladivostok in September, are preparing at least a few pleasant high-tech surprises. One of them, as already written by EastRussia, can become unmanned buses "MatrЁshka", Which he promised to launch this spring to the WEF on the island of Russian FEFU. But the second one is closely connected with the topic that the Russian president "fell completely ill," in the words of Igor Shuvalov, on the eve of another economic forum - Petersburg. At the SPIEF, recall, Vladimir Putin delivered a whole speech on digital technologies and met with Vitalik Buterin, co-founder of the Etherium platform, which works on block-technologies.

What is "blockade" in Russia really do not yet know, and there is simply no regulatory and legal regulation of the sphere - it only has to be worked out by the Central Bank. However, fashion on the topic, as it turns out, got not only to the "foremost" domestic hi-tech like Skolkovo, Rosnano and Sberbank. Blocking is distributed storage of data, which opens tremendous opportunities for building decentralized systems of interaction in any spheres, but the main thing that technology has already given to mankind is crypto-currencies.

Immediately after the SPIEF “Far East Development Fund” (FRDV) asked for advice from the Russian branch of Deloitte (included in the global “big four” consultants) about the possibility of attracting investment in blockchain technology to Russia. They say the author of the idea was Ruslan Sarkisov, who had previously worked at Rosnano and the RDIF. FRDV will not regret $ 30 thousand for consulting on legal and tax aspects of investing in the Russian Far East, companies that hold virtual currency could be the beneficiary.

The fund itself remains silent on this score, but according to rumors, they expect to present at the WEF to Vladimir Putin and world leaders not just reasoning on the topic, but several projects using the blockchain at once. One of them is likely to be a model of attracting investors through the blockchain platform, because Mr. Buterin at the meeting with Vladimir Putin said "about the possibility of using technologies in the Russian Federation," and the president "supported the idea of ​​establishing business contacts with possible Russian partners", shared with journalists after SPIEF Dmitry Peskov. In this regard, the FRED can even skip the Skolkovo.

So far, the meaning of the whole story with the blockade is well characterized by a couple of figures. The capitalization of the "virtual" Etherium already now exceeds $ 24 billion (1,4 trillion rubles). Declared for the past two years, investment in the Far East (also in fact in the lion's share of "virtual") - 2,1 trillion rubles. Virtual - to virtual.

As they say, the mayor Yevgeny Korzh, suspected of abuse of authority during the implementation of the gasification program for the Raduzhny microdistrict in Ussuriysk, was detained the day before, and was released from arrest - and not even under house arrest, but on recognizance not to leave. According to rumors, the official cooperated with the investigation. Taking into account that earlier the vice-governor of the Primorsky Territory Yevgeny Vishnyakov was detained on the same episode, further detentions are not excluded. The investigation is being conducted by the regional FSB, where, as is customary among the "Chekists", official comments are not very generous. Mr. Vishnyakov was arrested for 1,5 months at the end of last week.

Yevhen Korzh managed to attend the 2014 year as an assistant to the governor of Primorye, Vladimir Miklushevsky, on land issues, he oversaw the allocation of free areas for large-scale and individual housing construction. As the head of Ussuriisk, Mr. Korzh replaced Sergei Ruditsa, who resigned "at his own request for health reasons," but after instituting a criminal case against him on suspicion of negligence.

WHY DOES KHABAROVSKAYA MARIA HAVE DONE IN THE BLOGOSPHERE?

On the Khabarovsk Internet, they are discussing an unexpected event that the city administration held with bloggers, which had not previously pampered the blogosphere with its attention. In the absence of the mayor, Alexander Sokolov, with selected representatives of popular city "publics" in Instagram, he took a ride on the Amur on a boat. Mayor Sergei Kravchuk. Officials, as they say, "threw themselves off" on the rent of the boat of the Ministry of Emergency Situations "Amurets", and the formal reason for the meeting was the four years of large-scale flooding on the Amur. But the representatives of the mayor's office did not hide their intentions to start more actively making friends with social networks.

Mr. Kravchuk in the public field as a mayor or his temporary equivalent has not yet come, although the vice-mayor and at the same time the first deputy head of the administration for the economy became back in April this year. Some people believe that there was a sensation of the mass audience for the perception of the figure of Mr. Kravchuk as a potential successor to Alexander Sokolov, who, we recall, heads Khabarovsk from 2000, and whose fourth term expires in 2018, and whether the fifth one is still a question. The official himself on the direct question of bloggers, whether he wants to become the mayor, as they say, answered: "While I am happy with what is" - but - how to know?

The arrival of Sergey Kravchuk to the second most important position in the Khabarovsk administration also generated a wave of rumors. First, he came to this position after Valery Lebeda, who is considered to be one of the closest associates of Alexander Sokolov, and Mr. Lebeda did not leave the city hall, but became the first deputy mayor for investments. Secondly, before this career, Mr. Kravchuk proceeded in the management of municipal housing facilities and the Industrial District (then the Southern District) of Khabarovsk, that is, with policies that are inevitable for any vice-mayor or acting president. Mayor, was not connected in any way. But he has been working in senior positions since the middle of 2000's. So, the perception of him as a strong business executive is not bad for an audience of state employees who are usually actively voting in municipal elections, but for the time being weakly “falls” on the interests of the youth audience of social networks.

A DEPUTY FROM EMBANKED PEOPLE WANTS TO GET IN SAKHALIN'S RECEIPT?

Sakhalin was not at all alarmed, but the residents of Naberezhnye Chelny were seriously worried last week by the news that the leader of the local branch of the Communists of Russia party, Tatyana Guryeva, was on the party lists for elections to the Sakhalin Regional Duma. The voting will take place in September. Now lists of candidates for registration are submitted to the election commission. Small parties, including the "Communists of Russia", as a rule, form their lists for regional campaigns at the expense of representatives from all over Russia - simply because there are simply no active supporters of such parties in each subject sufficient for nomination.

Therefore, the appearance of Mrs. Guryeva on the Sakhalin party lists should not at all mean that the deputy will remain in the Far East in case of obtaining the right to a mandate. The piquancy of the situation is given by the fact that on social networks the day before, rumors began to spread anonymously that Tatyana Guryeva "fled to the Far East", allegedly having collected bribes before that. The head of the "Communists of Russia" branch in Naberezhnye Chelny herself explained to the local media that she really works with fellow party members in Sakhalin, but did not "run away" anywhere, and is ready to sue anyone who accuses her of bribery.

IN KOMSOMOLSKI-ON-AMURA, THE CHIEF POLICEMAN CHANGED?