On July 12, Pavlodar hosted the official opening ceremony of the KazCenosphere's LLP plant for the production of aluminosilicate microspheres. The raw materials for production are cenospheres, light fractions of fly ash from thermal power plants and state district power plants. It is a component of ash-and-slag mixtures of hydraulic removal, which is a waste of coal power engineering. The processing of the cenosphere raw concentrate into a high-quality engineering product requires careful selection, cleaning and multistage beneficiation. The waste-free technology mastered by the enterprise makes it possible to obtain aluminosilicate microspheres from heterogeneous secondary raw materials with unique advantages over existing analogues. 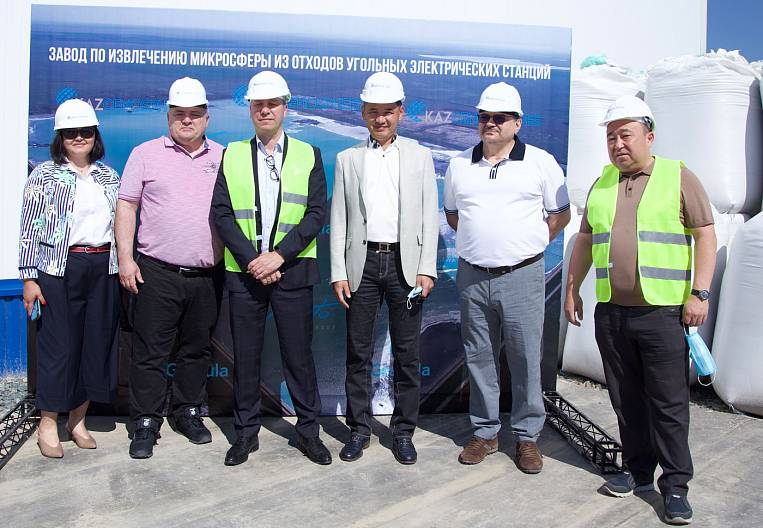 Microspheres are widely used as a lightening additive in grouting dry mixtures in oilfield services, as well as as a component of various composite materials to reduce the weight of products, increase wear resistance, strength, and improve thermal conductivity. Products with the use of microspheres are used in the manufacture of swimming facilities, in the manufacture of lightweight construction materials, in the construction of heating mains and other resource-saving solutions.

The KazCenosphere's project was launched in 2018, and in mid-summer 2021 it was brought to its design capacity. The enterprise can process up to 21 thousand tons of raw concentrate with an output of up to 12 thousand tons of finished high-quality products, focused on the global markets of Europe, North America and other regions. During the implementation of the first stage and commissioning of the main technological line, the company improved the technologies for the extraction and separation of light fractions of ash and slag mixtures (LFZU) in the specific conditions of the ash disposal area of ​​the AKSU GRES.

For 2019-2020 the turnover for the sale of raw materials of the first redistribution amounted to more than 2 billion tenge, a staff of 35 qualified specialists was formed. KazCenosphere's LLP has signed an exclusive contract with JSC EEC (ERG), which provides a unique right to collect LPZU at the ash disposal area of ​​the state district power station in Aksu. Together with Granula LLC (RF), studies were carried out to intensify the procurement of raw materials and methods were developed that made it possible to double the production of cenosphere concentrate. Before the start of KazCenosphere's in Aksu, the volume of procurement did not exceed an average of 2,8 thousand tons per year (data for the period from 2013 to 2018), and today it is up to 5,8 - 5,9 thousand tons per year. year.

KazCenosphere's LLP is a joint project of the Kusto Group and Granula LLC. The opening ceremony was attended by partners from Germany and Poland - Carsten Meerwink from CAMEX GmbH and Jatsik Pedrich from Zumir, as well as representatives of the akimat. Thanks to the support of the local administration and the personal participation of the deputy akim of Shayakhmetov Saken Beimbetovich, assistance was provided in solving all the difficulties that arise related to the preparation of documents and permits, the connection of communications, the import of foreign specialists who participated in the installation and commissioning of equipment.

The combined efforts of all participants and investors of the project made it possible to implement it in a short time, despite the difficulties associated with the restrictions caused by the COVID-19 coronavirus pandemic - the construction of the production took less than 1 year. In this short time, together with Granula LLC, we managed to build 4000 m2 production facilities, to import high-quality equipment from Russia, Slovenia and Germany. Moreover, scientists from the only research institute on the territory of the CIS countries engaged in ash and slag waste - JSC NIIPROEKTASBEST took part in the adjustment of the production cycle. It is thanks to the combination of high technologies and an innovative approach implemented in all projects of the "Kusto Group" that today the plant is one of the leaders in Kazakhstan in terms of the volume of processed products and the most modern in terms of the methods used.

KazCenosphere's is not only a successful commercial project, but also an important part of the region's environmental strategy. Timely and complete extraction of LFZU does not allow the wind to inflate particles from the surface of the ash dump, which reduces the technogenic load on the ecology of the region. The project also helps the power plant to clean the surface of the water mirror from the LFZU, which facilitates the return of circulating water and reduces the wear of the pumping equipment.

KazCenosphere's LLP carries out a set of works that significantly reduces the volume of air pollution, and further implementation of the project should have a positive effect on the socio-economic development of the region. Initially, it was planned to build a plant only for collecting and trapping the cenosphere, but then the idea was born to create a more complex and highly profitable production. Today the enterprise includes a line for deep multi-stage processing of raw concentrate of cenospheres, and plans for further development of production - from 2022 the construction of the second stage of KazCenosphere's will begin.

“In two years we have come a long way from developing an idea to an actively developing enterprise. A modern, high-tech enterprise produces an environmentally friendly engineering product from waste. This is an example of the rational use of resources that benefits people, ”said Kusto Group board member Kanat Kopbaev.

“We have been working with the processing of ash and slag materials for over 20 years. Feeling a favorable investment and partnership climate, we are ready to continue the development of this project and the joint implementation of new ideas. The group of companies "Granula" in recent years has become one of the leaders in the field of ash and slag waste processing. We are ready to offer both our experience and new developments. Separately, I would like to note the favorable business climate created by the special conditions of the special economic zone. In other countries, such support and efficiency in solving any problems would not have been possible, ”said Evgeny Tsypkin, the author of the technology and head of the Granula company.

An important condition for the quick start of the KazCenosphere's project was the presence in a special economic zone, which provides a set of significant preferences for foreign investors. The company that builds the production receives free land, exemption from land tax, exemption from CIT until 2036, zero VAT and the right to duty-free import of equipment and goods from abroad. Kazakhstan is increasing the pace of economic development by leaps and bounds, inviting everyone to invest in new industries, technologies and enterprises.

The KazCenosphere's project is part of the large production complex Kusto Group, implemented both in Kazakhstan and abroad. The group of companies is engaged in development, agriculture, mining, production of paints and varnishes and other projects. In Kazakhstan, for example, it actively invests in the agro-industrial complex - it produces seeds, raises animals, revived a skin processing plant and invited large partners who offered Kazakh farmers the most modern irrigation systems and a stable sales market for their products. “Kusto Group” not only creates profitable companies, but builds deep economic ties, implements the most modern technologies and processes to qualitatively increase the efficiency of enterprises, and, consequently, to increase the welfare of the region of presence.