Battle for the tourist 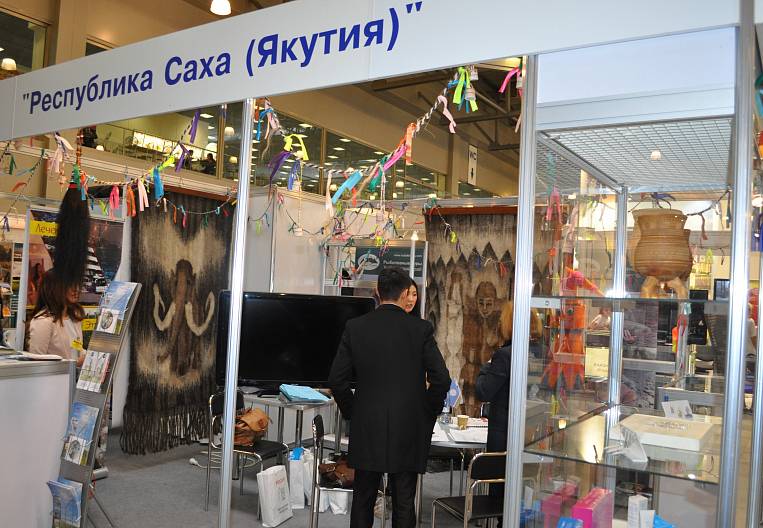 Against the background of the presentation of the promising Eastern Ring of Russia project at the Intourmarket 2014 exhibition held in Moscow, representatives of the Far Eastern Federal District unanimously said that the lack of transport accessibility and appropriate infrastructure severely hinders the development of tourism in the Far East.

The Intourmarket 2014 exhibition is a reason to be proud of your country - the riches of nature and cultural traditions. Tours along the Volga, Northern Shambala, excursions to the Ushkany Islands, Denisova cave, Aikhor waterfall - you have never even heard of such a Russia. It seems that our country overshadowed foreign participants - and in fact, among them were representatives of 148 countries and regions of the world.

Yakutia will close the ring

At the stand of the Far East, visitors viewed the corner of the Republic of Sakha (Yakutia). And not only because of the color and tasting of Yakut delicacies, but also because the presentation of the interregional project "The Eastern Ring of Russia" was held within the framework of the event. The project, planned for late summer, will cover four Far Eastern subjects of the Russian Federation - Buryatia, the Khabarovsk Territory, Kamchatka and Yakutia. The ring in Yakutsk and Mirny "Diamond Week" will close in the beginning of September. The participants of this tour, which, according to the organizers, will increase the tourist rating of Yakutia, will be able to trace the entire path of the diamond - from mining to cutting and turning a stone into an exquisite piece of jewelry, and to visit the Diamond Ball.

As Ekaterina Kormilitsyna, the head of the Ministry of Entrepreneurship and Tourism Development of the Sakha Republic (Yakutia), said, Yakutia has three main tourist advantages compared to other regions - cold, diamonds and nature.

"Of course, Yakutia has a lot to gain, and tourism is far from being the first. However, according to statistics, in the last three years the flow of tourists to the region is increasing by the tourist arrival at 6-7% annually. Our tourism potential is very high. This is the Pole of Cold, and the Lena Pillars, and the epic Olonkho, and the rivers and lakes. Branding our exclusivity, we are simultaneously engaged in solving problems - creating infrastructure, transport logistics. The project "The Eastern Ring of Russia" will only stir up interest in our region, "Y. Kormilitsyna said.

It is curious that, despite the negative impact of the flood that occurred in 2013 during the high tourist season, the growth in 4,9% of the number of foreign tourists (17,5 thousand people) was recorded in the Khabarovsk Territory. The internal tourist flow was 415,0 thousand people. Incomes to the regional budget from the enterprises of the tourist sector amounted to 213,4 million rubles. And this is 6% higher than the 2012 year.

Maksim Stavitsky, Senior Inspector of the Tourism Development and International Relations Department of the Ministry of Culture of the Khabarovsk Territory, noted that foreign tourists - citizens of the Republic of Korea, China and Japan - come to the region in large numbers. Tourists of Asian countries are attracted by unique natural resources - from the zoo, where you can observe animals and birds in the wild, to river rafting, hunting, fishing. In the Khabarovsk Territory ethnotourism is also developed - here there are unique indigenous small peoples of the North.

"What makes Khabarovsk Krai attractive for tourists from Asia is" Europe two hours from home ". Tourists fall into a completely different European culture with different architecture and other food, "M.Stavitsky said. Guests of the project "The Eastern Ring of Russia" in the province are waiting for a visit to the Khabarovsk bridge, singing fountains, walking along the old streets of Khabarovsk, and other interesting routes.

If we talk about Russian tourists, then the citizens of the neighboring regions - Siberia, Transbaikalia, the Far East, and also from Moscow mainly come to Khabarovsk. It prevents the high cost of tickets. Making the direction more popular will be helped by ensuring transport accessibility for middle-income residents from other regions - Kaliningrad, St. Petersburg, Krasnodar Territory. Yes, and from other regions of the Far East today to fly to Khabarovsk is too expensive.

"This factor is severely hampered, everything else we have," Maxim Stavitsky assured.

Alexey Yudin, director of the AMIST tour-business club branch in Moscow, agrees with the representative of the Khabarovsk Territory. The company is engaged in tours to Sakhalin and the Kuril Islands. The main tourists to Sakhalin and the Kuril Islands are the Japanese (95%). There are few Russians, but their number is rather stable. Mostly this Muscovites.

"If we are talking about Russians who come to Sakhalin in general, the Ministry of Tourism gives great figures, since it considers everyone who stops at the hotel. But the real number of tourists, which, for example, sends our company is 100-120 people, "A. Yudin said. According to him, there are a couple of companies that organize such trips, but they also have the same modest figures.

“A trip to the Kuril Islands in the amount of travel and related expenses costs about 100-120 thousand rubles per person for the 12-day tour. Such incomes have either residents of Moscow or large cities in the north of Siberia. The Siberians are so cold, and for the holidays they go to heat. Moscow is a multi-faceted city. There are people who travel to Kamchatka, to Altai, to Lake Baikal and do not spare money for it, ”A. Yudin expressed his opinion. We are talking about citizens 35-50 years, who have income from 3000 dollars per month. These are either IT employees, or middle managers, or an accountant, or top managers of companies, directors of small and medium businesses.

"These people are drawn to the wild, and they come to Sakhalin, like a safari to Africa," the expert said. And with the infrastructure, everything is more or less in order: the hotel base on Sakhalin is very young and modern - in the 1990-s during the intensive development of Sakhalin oil and gas projects more than 40 new hotels were built here. On the excursion tourists are delivered on comfortable jeeps.

"In fact, this region is to some extent a competitor of Kamchatka, although there is no legacy of Japanese culture in Kamchatka. And of course, the sea, on the Kuril Islands (and on Kamchatka too) the sea always accompanies you. It creates an amazing feeling of being at the edge of the world, "A. Yudin said.

Tags: "Intourmarket 2014" "The Eastern Ring of Russia" Tours along the Volga North Shambhala DFO Yakutia Buryatia Khabarovsk Krai Yakutsk "Diamond Week" Head of the Ministry of Enterprise Development and Tourism of the Republic