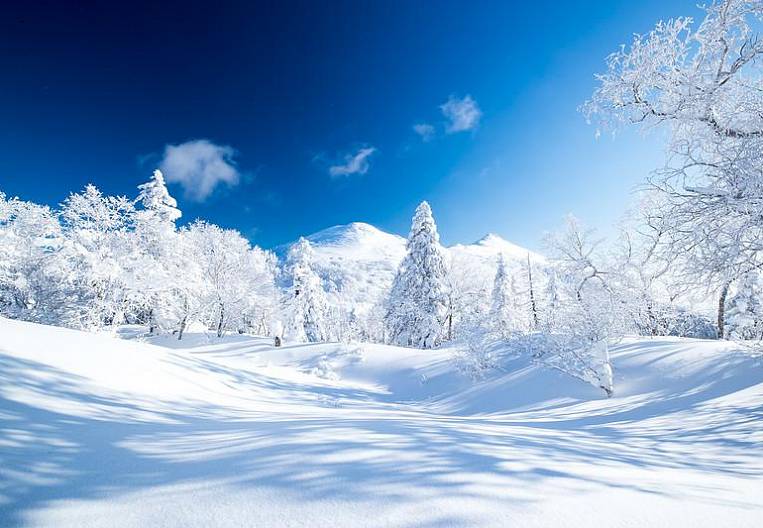 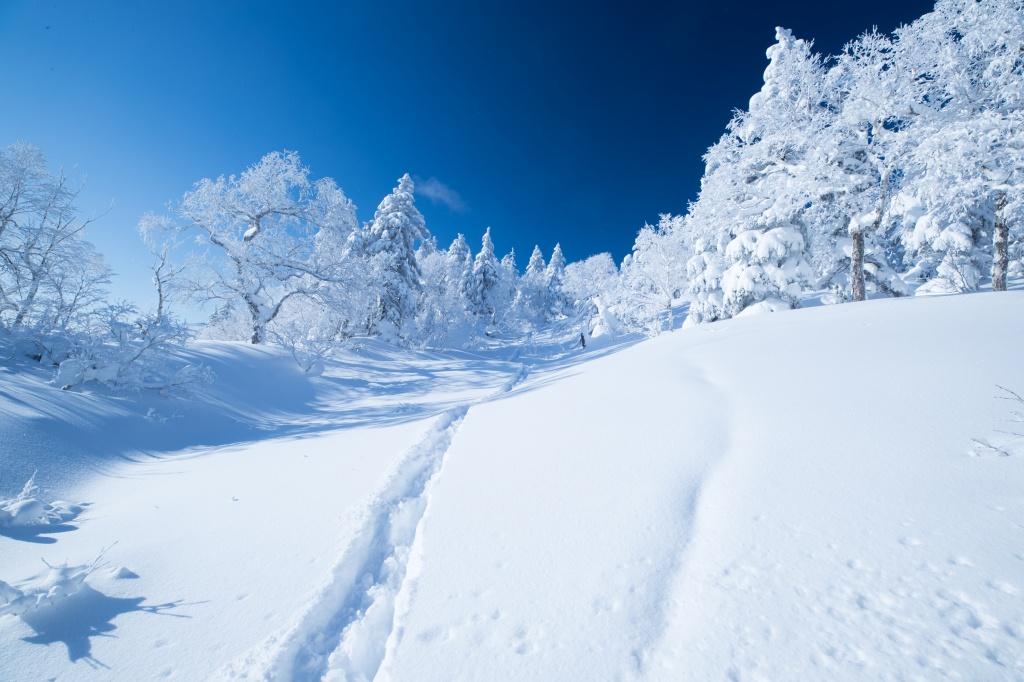 #EastRussia has got hold of photos that would have caused a fight among sellers of bleaches: white in the Enchanted Forest is a reference. The highest mountain coniferous forest on Sakhalin grows on Mount Pushkinskaya (located on the Susunai ridge, the highest point is 1047 m., Near The foot of the western macroslope is located in Yuzhno-Sakhalinsk.- east Russia comment). The island, although mountainous, but sprawling ate at an altitude of 800 meters - a rare phenomenon. Needles under 20-30 centimeter layer of "breading" can not be discerned, frequent blizzards in the foothills simulate white fur coats from compact, compressed snow. Author of pictures Dmitry Sergeev says, in the summer, the cedar stlant, which forms the obstacle course, hints: "You will not pass." In winter it is easier.

- Though on skis, and it is impossible to roll, it is very bad! Enthusiasts go there and those who have an adequate physical form. I remember the first time they explained to me: first you walk along an abandoned Japanese road, you reach the ridge and to the right, and then you look for the highest peak behind the Japanese geodetic mark. So I found it for the first time. Hours 10 walked. If you walk on snowshoes, the road takes about that much. You can also ride a snowmobile if you are extreme, although I think it will be difficult to do. This time, on skis, I covered the path in 6-7 hours. Strictly speaking, I was not going to the very top, I was interested in the so-called Enchanted Forest in the foothills. Therefore, I didn’t think too much of my clothes, everything was kept to a minimum, there was only “caramel on the cheek” from food. But somehow mentally it went and rolled, and I, not giving a damn about the equipment, decided to jerk to the end. The photographs are dominated by two colors, their saturation depends on the position of the sun. I don't use Photoshop.

The Sea of ​​Okhotsk is swirling below: 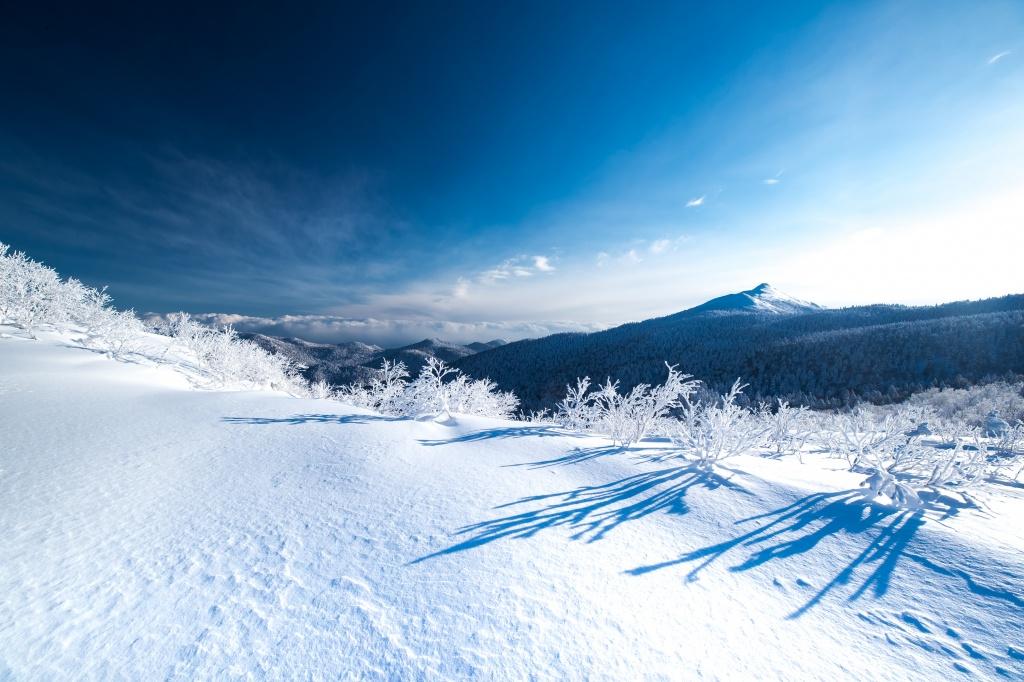 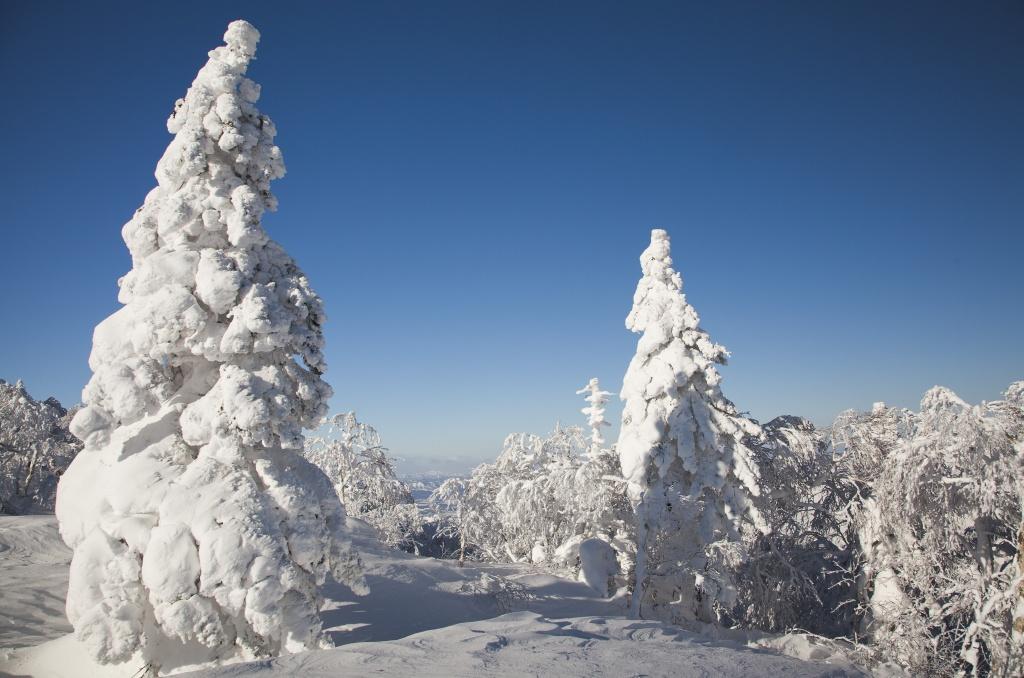 Has not passed by a trend and has jammed "селфи": 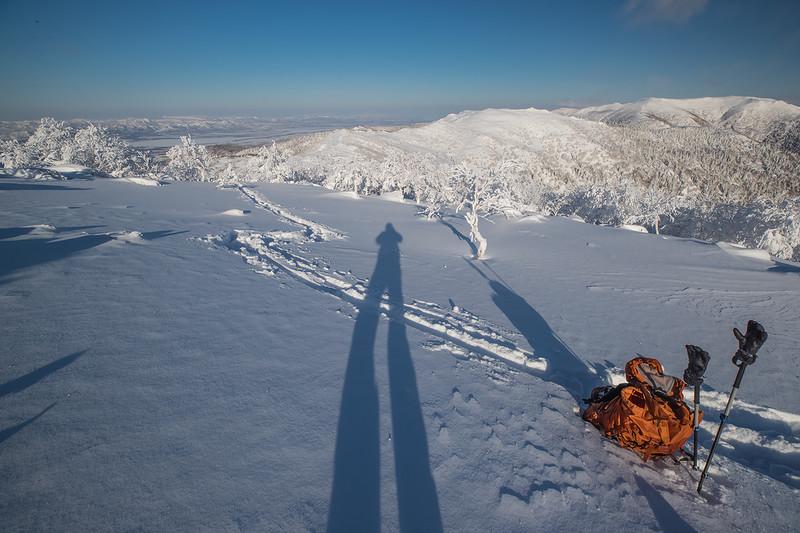 To the right is Pushkinskaya Mountain: 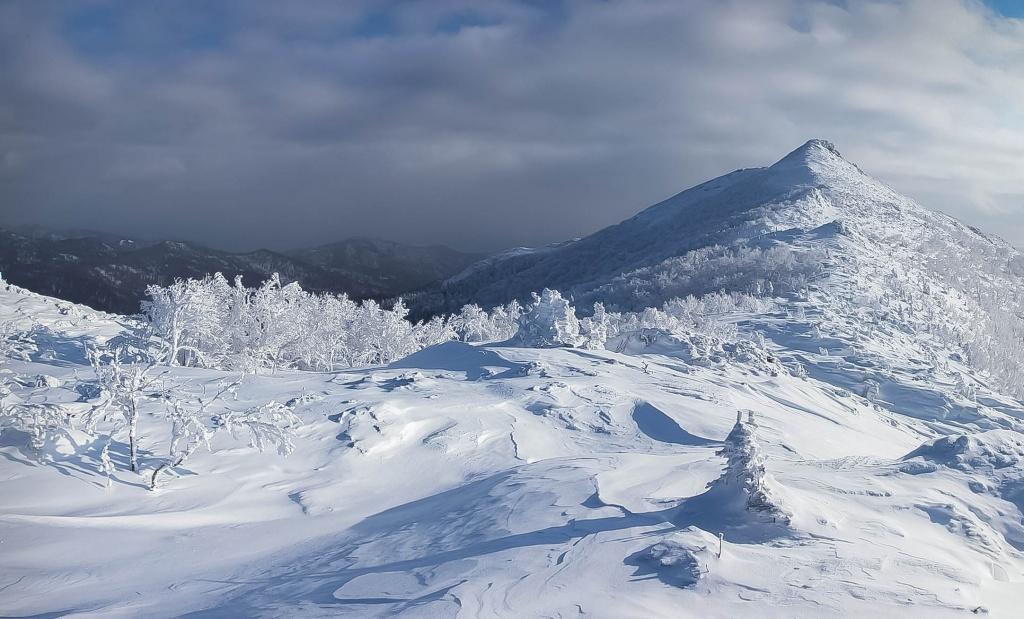 Sakhalin baobab and my uncomplicated traces: 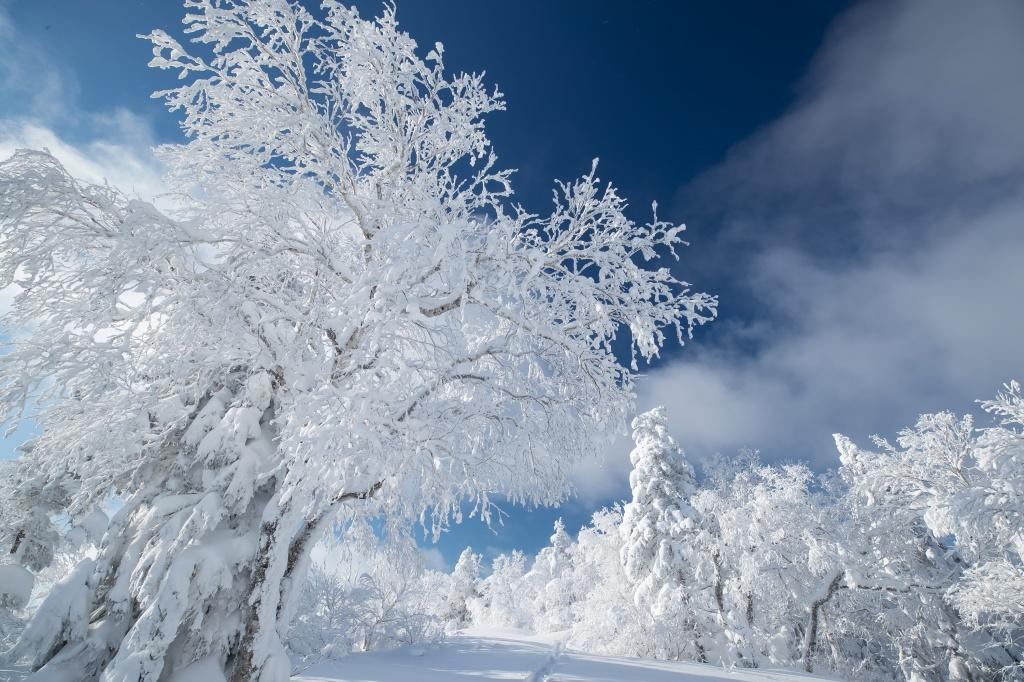 Deep spring blue overhead in December and "delicious" air. Winter in the Enchanted Forest has straddled every conceivable vertical, horizontal and diagonal line. The stalactites of trees bend under its weight, rare skiers, balancing on white, break through the path along the virgin lands. To the envy of cold Yakutsk, Irkutsk, Khabarovsk, and slushy Moscow: with impressive snow reserves, this is a forest of very shallow freezing.

"Winter is warm on our Sakhalin, snowy." On Pushkin this day was 10-12 ° frost. While I was wandering around the neighborhood, I came across today's tracks, supposedly bearish, later they blocked my ski track. Paradox. At that moment I was already not alone in the mountains, but for some reason I felt dull loneliness. With this feeling, I did not fight and set up skis on the way back. I'm not a fan of Yury Shatunov in any of its manifestations. Kilometers to the foot of the ridge, I, of course, flew quickly, without ceasing to twirl the skull. A little bit about serious. And what did we come up with when we broke the fish? I have never stumbled across Sakhalin in all places and at this time on the tracks of a bear. And how the bear will lead in the winter when he meets a man, I think there are not many options. About the tracks that he saw. It so happened that my message caused an extraordinary resonance in tourist circles and not only. I did not intend to panic and assessed the situation soberly. Traces of seeing before that. Nakatal request to the Minohot, people there are literate, drive and check - Dmitry has shared.

UPD: Okhotinspekty took control of the situation. In general, bears both in the warm season, and in the unseasonable, winter hour are more noticed near the shelter and, especially, near the garbage. In the wild, they try to keep distance with the person. 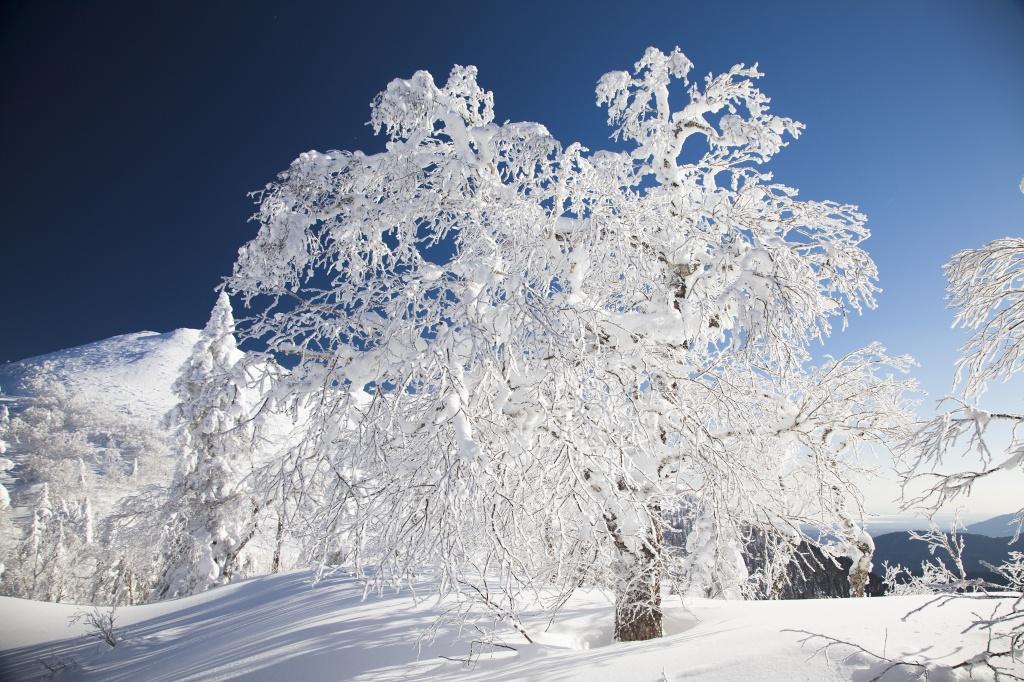 "A mountain that does not like parades" - this is how the famous Sakhalin traveler Andrei Klitin said about Pushkin (died in 2014 while climbing Mont Blanc). Although the heights on the island are relatively small, on the tops sometimes "you can grab the full. A light snowball in the valley can turn into a hard blizzard overhead with complete loss of orientation. Given that the place is not massive and there is no infrastructure in the Enchanted Forest and its surroundings, you can only rely on yourself and your partners. And the main catch: the area is avalanche. 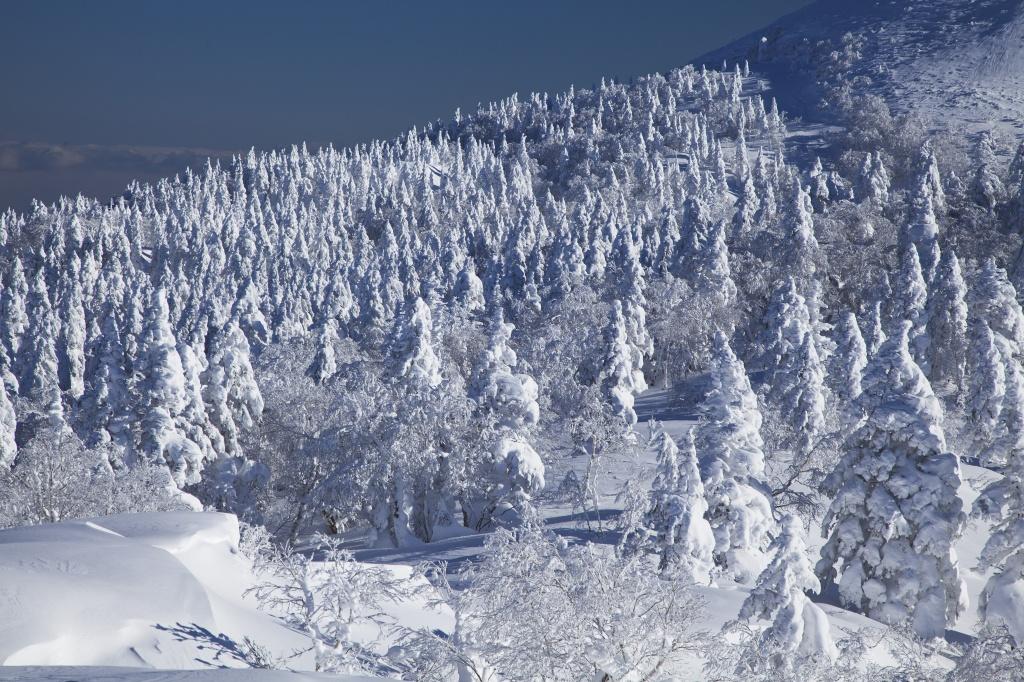 And, finally, an industrial landscape. View of Yuzhno-Sakhalinsk from the foothills of Pushkin: 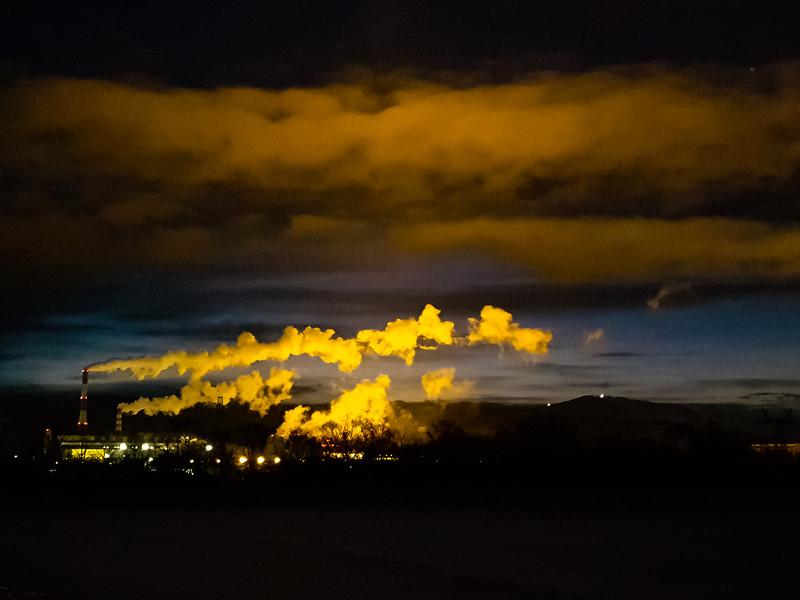 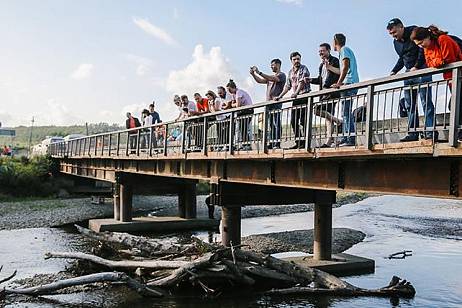