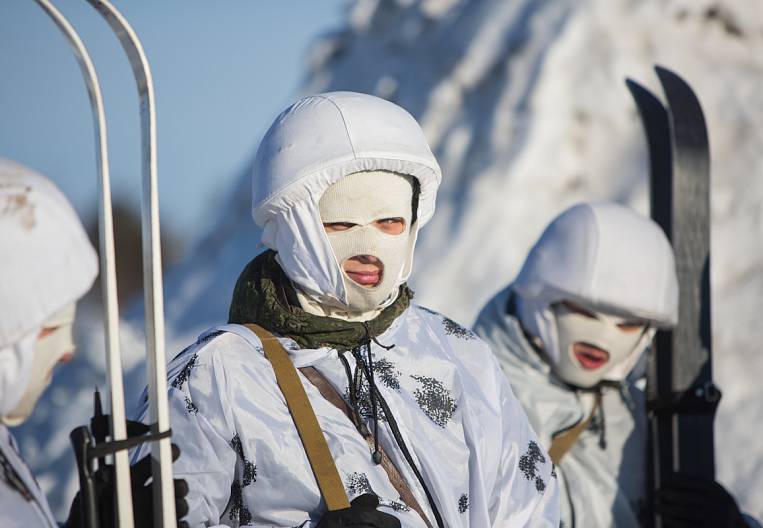 The first graduation of the "northern military" is scheduled for 2017, after which they will head the country's first Arctic units, formed on the territory of 2 districts - Eastern and Western. The guys will serve all over the Arctic Circle - from Kamchatka to the Kola Peninsula.

It is difficult to imagine the construction of military bases and airfields, the construction of houses, towns and even churches, but this is all about the new, or rather the well-forgotten old, harsh and chilling territory beyond the Arctic Circle. The once "no man's" land is increasingly attracting the attention of states as a place for prospects. Moreover, both economic and political. After all, whoever owns the Arctic, even at least a small part of it, obviously becomes a significant player on the world stage.

Recently, this "white desert" has been increasingly talked about on TV screens and in print - for example, immediately after the New Year holidays, Prime Minister Dmitry Medvedev signed an order to create an Arctic support base. According to it, the city of Severomorsk of the Murmansk region will be transformed by separating the village of Roslyakovo, where one of the promising projects of Rosneft will be implemented. Or here's another: from December 1, 2014, all the strategic northern territories of the country (both Western and Eastern military districts) were transferred to a single subordination of the Northern Fleet troops. This means that the introduction of the concept of "northern troops" is a matter of time.

Meanwhile, in the Amur Region for the third year already, military training with a "northern bias" is underway. A special program for training Arctic riflemen was developed at the Far Eastern Higher Military Command School (DVVKU) named after V.I. K.K. Rokossovsky, which is based in Blagoveshchensk. The teachers of the military higher educational institution do not hide their pride - after all, the idea of ​​creating the "Arctic" as a separate branch of the army, and the right to train them belongs to them alone in the country.

“Until recently, at our university, cadets studied only in 2 specialties: motorized riflemen with mountain training and marines,” says the head of the DVVKU, Major General Vladimir Gryzlov, “but once the thought crept into my head: what if we use our frosts ( up to -40 with humidity and wind - author annotation) for something more? We turned to the command and explained what we wanted. We were given the go-ahead with a prerequisite - before the start of the training program, all class leaders must undergo special training at the St. Petersburg Research Institute of the Arctic and Antarctic. The curriculum for future officers was written in parallel with self-study and we are still rewriting it, adjusting it to the urgent tasks. "

As part of the training, cadets go through all the same disciplines as their future colleagues with one significant difference - special emphasis is placed on field training in the snow, regardless of temperature: without fail, each future "Arctic" must be able to build an igloo, make several types of fires, perfectly own skis (both mountain and cross-country), a snowmobile, and also be able to shoot from any weapon at -50 degrees. It turns out a kind of modern universal soldier.

“Recently, the head of the school gave us an interesting task:“ all the Arctic should be walruses ”. As a result, the work on the participation of our officers and cadets in the competition in swimming in cold water has started actively. Now 2 of our teams are keeping up to a decent level in the region, - Vladimir Rukosuev, Deputy Head of the Far Eastern Higher Education and Research Department for Academic Affairs, smiles. - Of course, not everyone can withstand this: someone for health reasons, someone has a weak vestibular apparatus, fear of heights and so on - we just transfer such people to motorized rifles. On another it is impossible".

At the same time, there is fierce competition for the "Arctic" places - in the summer, during the work of the admissions committee, almost a kilometer long queue of parents and children lined up near the school - such military old-timers will not remember in recent years 10. The lucky ones who managed to catch hold of a military university are proud of their choice ... Even when you have to overcome your own instincts and the most severe psychological stress.

“Not so long ago, we imitated being caught in an avalanche - they simply buried it in the snow to a depth of 1 meter. And here you are lying, you cannot move a single part of your body, and you begin to remember the happy moments of your life, - says Vladislav Bushuev, a third-year student of the DVVKU from Blagoveshchensk, - and there is only a meter of snow above you. This is how we are taught not to panic if we are suddenly hit by an avalanche - after all, you cannot do anything, only those who are above can pull you out. "

“You see, this is such a competition - can I do even more? How will my body behave? - Alexey Borvatov from Magadan got used to frost since childhood. - I am completely satisfied with my choice: it is interesting, it is prestigious. If at the end of the contract I go to civilian life, I can be a ski, mountaineering or survival instructor. In my opinion, it's worth it. "

The ability to survive in conditions of blizzard, polar night and low temperatures not only by themselves, but also to teach others with skills of amphibious assault and mountain training should be brought to automatism, teachers are confident. That is why the cadets constantly disappear at the landfills. In addition, several times a year they are sent to the Polar region (in particular, to Egraki and near Murmansk), where the guys work out all sorts of regular and abnormal situations.

“The interestingness of this specialty, in short - in a combination of everything in a row,” explains Sergei Borzov, a lecturer at the Department of Tactics and Troops Command of the Far East Military Command - Nowhere else will you get the opportunity to build an almost invisible fortified igloo, and then sit there with a machine gun and enjoy the northern lights. We even have skiing, they teach to ride dogs. "

At the moment, about a hundred people are preparing to receive the title of Arctic shooters in Russia. At the same time, DVVKU is capable of teaching up to 300 people per course. The first graduation of the "northern military" is scheduled for 2017, after which they will head the country's first Arctic divisions, formed on the territory of 2 districts: Eastern and Western. The guys will serve all over the Arctic Circle: from Kamchatka to the Kola Peninsula.

“In the course of internships and educational practices, our children will have the opportunity to visit almost all parts of the Arctic formations,” says Alexander Sinyuchenko, head of the Department of Tactics and Troops Command of the Far Eastern Military Command, “that is, during business trips, they will be able to decide on a place, and after graduating from school, choose - which part and connection to go to. "

The exact number of military units, as well as the staffing of military officers on the Arctic borders, is classified as "secret". However, the management of the DVVKU assures that it is ready to cover any requests from the personnel of the Ministry of Defense.