Diamonds are "our all" 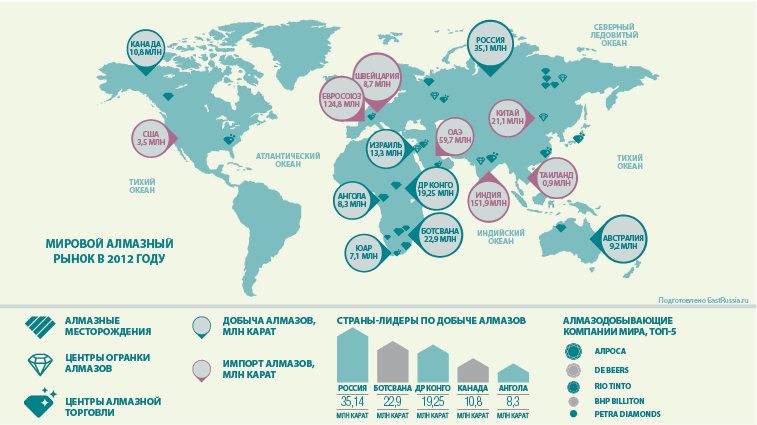 The possible introduction of economic sanctions by the European Union and the United States due to the accession of Crimea to Russia makes the creation of a diamond exchange in Yakutia more urgent than ever.

In connection with the political events of recent times - the annexation of Crimea and Sevastopol to Russia - the issue of creating a diamond exchange in Yakutsk has been actualized. Trading in diamonds through the Antwerp and London stock exchanges, through which the flow of Russian diamonds flowed, is becoming problematic. Perhaps, taking into account this circumstance, at the March 13 Peace Meeting on the Development of the Diamond Mining Industry, Plenipotentiary of the President of the Russian Federation in the Far Eastern Federal District, Yuri Trutnev, instructed to work out the issues of creating a diamond exchange in Russia.

Given that the Moscow Diamond Exchange has been established in Moscow for a long time, which still does not make exchange trades with rough diamonds, it would be preferable for the republic to create an exchange in the territory of Yakutia as part of the programs for the development of the Far East. In addition, due to the changing political and economic situation, it would be possible to create a commodity exchange in Vladivostok for trade in oil, gas, coal and other commodities.

The world diamond business in the third millennium

The beginning of the third millennium was marked by radical transformation of the giants of the world diamond mining industry. Since 2000, De Beers, then a world leader in diamond mining, has been transformed from an open to a closed joint-stock company. Our ALROSA, on the contrary, since 2011 year has become an open joint-stock company. At this strategic changes in the structure of the two leading diamond mining enterprises did not end, but, on the contrary, entered a new phase.

The entire global diamond business was shocked when, in 2013, Oppenheimer's family sold 40% of De Beers shares to Anglo American holding company for 5,3 billion dollars, having ceased its nearly 100-year ownership of this business. However, owning both ends of the diamond pipeline and indirectly managing the world's largest diamond mining company (through Anglo American, in which the family owns 2% of the shares), they continue to manipulate the global diamond business, and the very well-thought-out and legendary De Beers motto is the diamond Forever (a diamond is forever).

This event significantly changed the current situation in the structure and organization of the global diamond market. Anglo American, having control over De Beers, can later be more flexible and mobile, depending on the commodity markets, to redistribute the revenues to more profitable segments and thus maintain stability during the crisis periods.

The privatization and IPO of shares of OJSC AK ALROSA became a fait accompli. As a result of consideration of the final order book, over 60% of the shares went to US investors, 24% to European and 14% to Russian. Considering the slump in the Russian economy that has emerged since the end of the year and the consequences of political events in Ukraine, which may lead to wider economic sanctions from Western countries, it is safe to say that the IPO of ALROSA was carried out on time and at a fairly high price. The total amount of the transaction was $ 1 million, of which Russia and Yakutia received $ 286 million from the privatization of shares, and the company itself received $ 562 million.

Speaking about the role played by ALROSA in the economy of Yakutia, it is difficult not to agree with the statement of the President of the Republic of Sakha (Yakutia) that this is "our everything", and there is no exaggeration in this. Despite the arrival of the largest Russian mining companies in the republic, which began large-scale development of the country's oil and gas and coal fields, taking into account the taxation system in Russia, the diamond and diamond complex remains the strategic and main budget-forming branch of the economy, and OAO ALROSA is its foundation. The shares of AK ALROSA today remain the last major asset in the ownership of the republic, which makes it necessary to maintain state control over the company. And, as the practical experience of recent years has shown, it is state support that can keep the diamond mining industry from a sharp decline during periods of economic instability and crisis phenomena in the world economy, since the main component of the price of diamond mining and processing products is formed in the luxury market.

Diamond mining in the world is produced in 22 countries around the world, but if we single out the largest diamond-mining states at a diamond production cost of more than 1 billion dollars per year, then they can be combined into the BRACS countries: Botswana, Russia, Angola, Canada and South Africa (Table 1 ).

As can be seen from the data presented, the BRACS countries play a leading role in the global diamond business, producing more 2 / 3 diamonds in terms of volume and 5 / 6 in value, which indicates a higher level of diamond trading. In addition, it should be noted that in these countries the cutting industry was created.

Contours of the world diamond pipeline up to 2030 year

World Economic Crisis 2008-2010 Radically changed the balance sheets between the mining, cutting and diamond trading enterprises that were formed in the pre-crisis times. The competition between them in these conditions has sharply intensified. The decline in demand for diamonds and diamond jewelry in 2010 led to a change in the proportions between the sectors of the diamond business, and the performance of the global diamond pipeline-2012 differs from the previous one.

In 2012, the six largest companies played a major role in the diamond industry (see table 2). 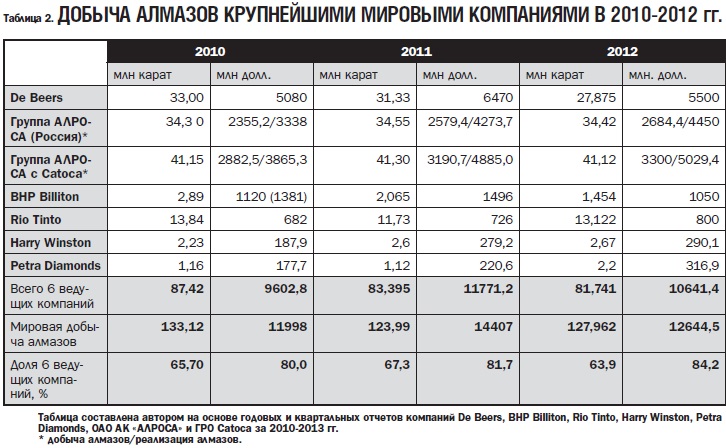 The share of the world's largest companies in diamond mining after overcoming the crisis in this sector is about two-thirds in physical volume and more than 80% in value. Based on these proportions, one can roughly determine the world diamond mining. However, if in a stable market the method allows to predict the indicators with sufficient accuracy, then in a crisis situation such an estimate leads to significant errors.

The triangular diagram shows the gradual growth of the diamond mining industry with an almost constant share of the lapidary industry. The share of the jewelry sales segment with diamonds is decreasing. The global financial crisis 2009 radically changed the ratio of the diamond pipeline due to a sharp decline in the performance of the first two segments of the diamond market. Obviously, the lapidary industry is directly dependent on both the cost parameters of diamond mining and the demand for diamond jewelry, and is therefore the most susceptible to crisis manifestations. On the other hand, diamond production in the world will remain at the level of 115-125 million carats a year, but due to the excess of demand over the supply, the value of the diamonds produced will increase. As the world economy outlined the way out of the crisis, the indicators of the lapidary industry and the production of jewelry will also increase. 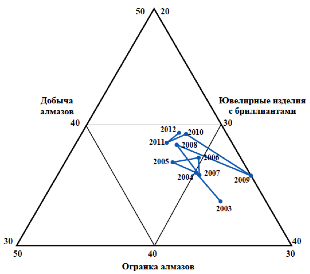 With the help of a three-component diagram, taking into account current trends in the global economy and segments of the diamond pipeline, a forecast is made for further changes in the segments of the global diamond business in the future up to 2030 (Table 4).

According to the forecasted figures for the diamond pipeline, the cost of mined diamonds will almost double by 2030, while the cost of diamonds produced and the volume of diamond jewelry sales are only two-thirds.

Thus, the creation of a diamond exchange in Yakutia will in the future allow a significant profit not only from the sale of rough diamonds, but also diamonds and jewelry with diamonds, but also from trade operations with them.
Tags: Diamond exchange Yakutia Sanctions from the European Union and the United States Accession of the Crimea to Russia Yakutsk cutting and jewelery industries global diamond market Department of subsurface economy NI IRES NEFU named after M.K. Ammosov Antwerp and Lond