Abe and Trump: friendship is friendship, and tobacco is apart 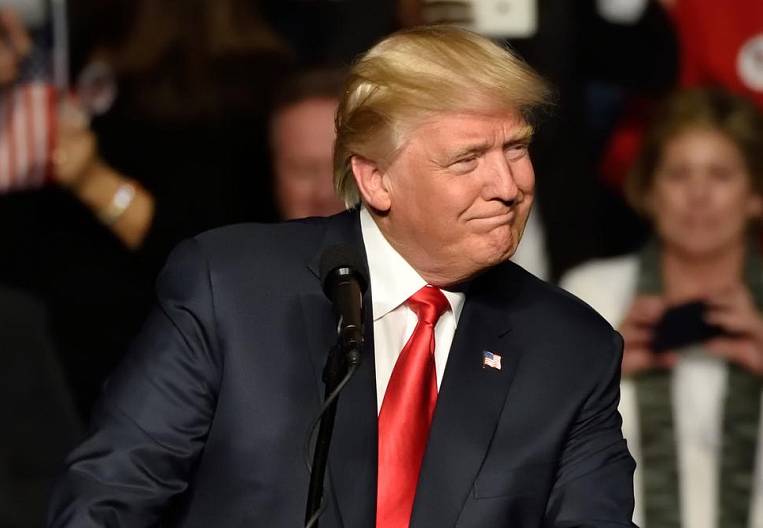 Russia and Japan: Acceleration to Peace? Pacific Underwater Racing Nineteen men and one woman Shinzo Abe
All author's materials
At the end of the second decade of April, Japanese Prime Minister Shinzo Abe and US President Donald Trump spent two days together in the mansion of the American leader Mar-a-Lago in Palm Beach, Florida. This mansion is informally referred to as the "Winter White House". In the course of communication, including during the ritual party for golf that has already become for them, the leaders of the two countries diligently demonstrated their friendly relations. Informally communicated and their spouses.

However, the leaders of Japan and the United States could not hide the profound differences between their countries on the key issues of their relations. Moreover, Abe's hopes were not met that Trump would understand the concerns of his "Japanese friend" with understanding. Assured him of the full support in the international arena as a whole, Trump in the US-Japan bilateral relations remained true to his philosophy of America First (America in the first place).

This was manifested, first of all, in the approaches of the American president to the nuclear missile problem of North Korea and to the Japanese-American trade.

Apparently, Abe was shocked by the news that, through the mediation of South Korean President Moon Jae-in, an agreement was reached between the US President and the DPRK leader to meet in person. It can take place in late May - early June. Moreover, Trump himself "stunned" his Japanese friend in Palm Beach by informing him that the CIA Director and Trump's candidate for the post of Secretary of State Mike Pompeo had secretly traveled to North Korea to meet with its leader and pave the way for Trump's historic summit with Kim Jong-un. Trump told Abe that the United States and North Korea "respect" each other and added, "I think it's time to talk."

Such a turn in the US approach to North Korea came as a complete surprise to Shinzo Abe, who repeatedly stated that now is not the time for dialogue with Pyongyang, and that his nuclear missile puzzle can be solved only by gradually increasing pressure on the North Korean regime in all azimuths. At the same time, Abe insists that this solution has no alternative to it lies in Pyongyang's complete, irreversible and verifiable abandonment of its nuclear missile potential. To this end, Tokyo is actively creating a united international front of pressure on the DPRK, the "engine" of which should be the "troika" consisting of Japan-USA-South Korea.

Abe was not enthusiastic about the agreement on a meeting between the leaders of the two Koreas at the end of April. In order not to remain aloof from the events rapidly unfolding around the Korean Peninsula, the Japanese Prime Minister made the mentioned urgent rendezvous with the American President in Florida. In addition, he did not rule out his own meeting with Kim Jong-in.

Most of all in Japan they fear that Washington and Pyongyang will agree "over the head" of Tokyo on the elimination of North Korean ballistic missiles. They can "get", according to some estimates, almost the entire territory of the United States. But then the DPRK will have a large number of medium and short-range missiles, the range of which fully covers the Japanese archipelago. Nonetheless, in a "good face", Abe told Trump, "I would like to pay tribute to Donald's courage in holding personal talks with Kim." Having already returned to Japan, Shinzo Abe, following Trump, was forced to positively assess Kim Jong-un's sensational statement about his readiness to suspend nuclear missile tests from April 21. Although the Japanese prime minister made a reservation that the ultimate goal still remains the same - the complete elimination of North Korea's nuclear missile weapons.

At a joint press conference in Florida, Abe, apparently without much enthusiasm, took Trump's praise to President Xi Jinping for his efforts to solve the DPRK nuclear missile problem. Due to the consistent evasion of the Chinese leader from summits with his Japanese counterpart, Abe himself has not yet had a chance to talk to him personally about this problem. The rather cool relationship with Moon Jae-in also deprives the Japanese prime minister of the opportunity to frankly discuss this problem with the South Korean leader. For Abe, this is especially annoying, since, as noted, it was Moon who mediated in the planned US-North Korean summit. For his foreign policy bet solely on the unpredictable Trump and his inability to build relationships with the leaders of neighboring countries, Abe has been severely criticized by his own media. In their opinion, this undermines Japan's influence in the region.

Analyzing the April summit of Abe-Trump, Japanese observers conclude that from now on for the incumbent American president, Japan is not so much a partner in solving the North Korean nuclear-missile puzzle as an economic competitor, with whom it is necessary to negotiate rigorously with the "unfair" trade with him .

Indeed, the unpleasant topic took the lion's share in the negotiations between the leaders of Japan and the United States. Even during his presidential campaign, Donald Trump accused the main foreign trade partners of the United States of conducting unfair trade and promised to fix the situation if elected. In fulfillment of his campaign pledge, the American president in March announced the need to sharply increase import duties on steel and aluminum from China and Japan, which are the main culprits of the huge foreign trade deficit of the United States. In it, Japan accounts for approximately $ 65 billion. To address this problem, Prime Minister Shinzo Abe and President Donald Trump agreed to establish a new channel of negotiations during two-day meetings.

Now trade negotiations between the two countries will be held at the ministerial level with the participation of the Minister for Economic Recovery of Japan Toshimitsu Motegi and the US Trade Representative Robert Lighthizer. The creation of the new structure can be seen as a step that will somewhat alleviate the severity of the trade conflict between Tokyo and Washington, since both leaders have "lowered" its resolution to a lower level. True, disagreements remain regarding the content of the negotiations within the framework of the newly created mechanism.

The Japanese side fears that on a bilateral basis it will be easier for the United States to "twist the arms" of its trade counterparties than they could do in the framework of multilateral structures such as the Trans-Pacific Partnership (TPP), which is currently being created, - a free trade agreement. According to the initial plans, 12 countries of the Pacific Ocean basin were supposed to join it. However, shortly after his inauguration, Trump announced the US withdrawal from the TPP. Thus, he dealt a sensitive blow to Abenomics - the course of the current Japanese Prime Minister to bring the country out of prolonged economic stagnation.

At the last meeting, Abe once again called on the US to return to the Trans-Pacific Partnership, stating that the CCI is "the best for Japan and the US." Trump, however, only emphasized his intention not to return to the TPP, unless it is revised on very favorable terms for the United States, saying: "I would prefer a bilateral deal." As Japanese experts remind, the United States has repeatedly used this method of negotiations to resolve deep economic tensions with Japan in the 1980s. It was a period of bitter Japanese-American trade wars. In their opinion, the specified American practice is contrary to the spirit of mutually beneficial free trade, professed by the World Trade Organization, which was established in 1995.

During the Abe-Trump summit, contrary to the hopes of the Japanese side, an agreement was not reached to release Japan from restrictions on its export of steel and aluminum to the United States. With a request to make an exception for her in this regard, Tokyo immediately turned to Washington in March, as soon as Trump announced his intention to introduce protective duties on the import of these and other goods. Trump's refusal to friend Abe probably caused the latter to be especially disappointed in light of the fact that the United States made such an exception for its other important ally in Asia, South Korea.

As a result, the only positive that Abe took home from Florida after his meeting with Trump is that the American president promised, during talks with Kim Jong-un, to raise the question of the fate of Japanese citizens abducted by North Korea several decades ago. Abe calls this issue the most important foreign policy challenge for his administration. However, according to the Japanese media, although Trump said "we will do our best to get them back," he did not mention any specific plan to achieve this goal.

Thus, the very modest results for Abe of the meeting with his American friend Trump do not contribute to the strengthening of the Japanese leader's domestic political positions, which have been shaken as a result of a number of recent scandals. These include patronizing businessmen close to the prime minister in their dishonest land deals, concealing the true state of affairs with the dispatch of a peacekeeping contingent of the Japanese Self-Defense Forces to Iraq in the early 2000s, and sexual harassment of some high-ranking officials of the country that surfaced in recent days.

As a consequence, in April, the rating of Shinzo Abe's cabinet fell to an unprecedented low level of less than 30%, and Abe's own ambitions to be re-elected this September for a third term as chairman of the ruling Liberal Democratic Party are questioned. Victory in the party elections would automatically give him the opportunity to extend his tenure in the chair of the country's leader until 2021. Thus, Shinzo Abe could set a historical record for the Land of the Rising Sun - 9 years of continuous stay of one politician at the helm of power.
Tags: Abe Tramp DPRK China Japan USA 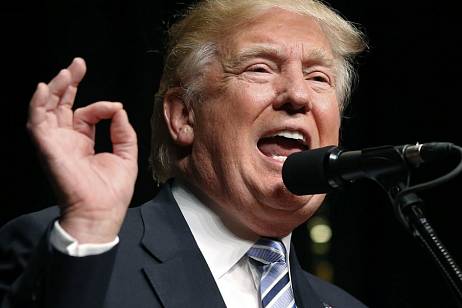 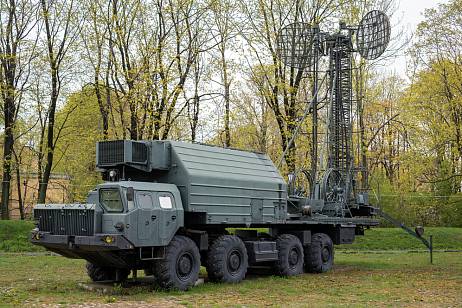