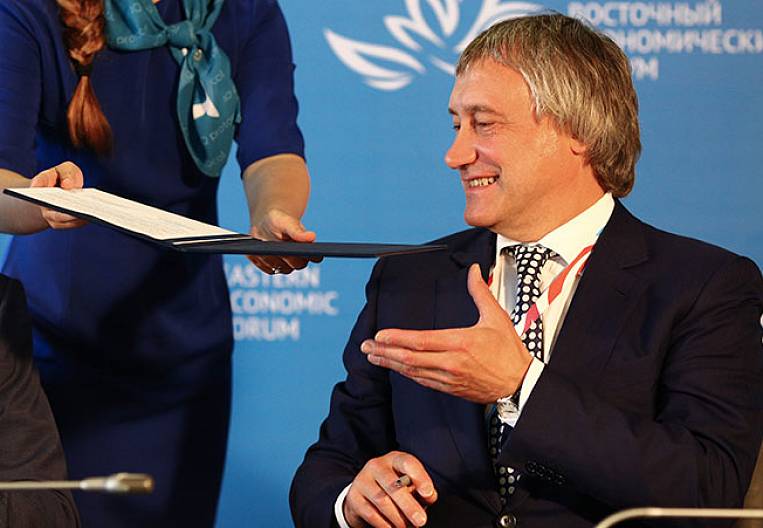 - Sergey Vladimirovich, at the beginning of this year there were different versions of how the two large state financial institutions, the Sakhalin Oblast Development Corporation and the Far East Development Fund, will partner in the Far East. Is there a solution?
- The question of cross-ownership was discussed when we entered capital into the Development Fund for the Far East in order to capitalize them and treat each other as a group of companies. We have already gone further, we are discussing a mechanism with a closed mutual investment fund "Vostok", where we are in partnership, but due to structural changes we have achieved a more loyal structure.

- What are the current relationships between the Corporation and the Fund?
- The capital of the Sakhalin Region Development Corporation is more than 800 million dollars. Since its inception, the Corporation has earned 3,5 billion rubles, and paid about 500 million rubles in taxes. Our average number, which we have agreed on the business plan, is 15 people. Manage the capital of nearly a billion dollars by the staff in 15 people - if not adventure, then a high risk. Therefore, in determining the strategy for managing capital and investment activities, we decided to take quality outsourcing. The Far East development fund was chosen as a partner, because we are very consonant, not only by name, by activity, too. They are comfortable for us, because they are the official financial adviser to the government of the Russian Federation.

- One of the official.
- One of. But in this part they are more comfortable for us than any consulting organization with foreign capital. The Far East development fund is qualified contractors. But this does not deprive us of the right to involve other consultants. Sometimes we recheck some tasks for them, we delegate some tasks to other contractors. But the Foundation has an anchor, a basic partner, 90% of the work for each project they do.

- Is this relationship between the Sakhalin Oblast Development Corporation and the Far East Development Fund commercial?
- Yes, this contract is material for us, it does not cost 3 pennies. But from the point of view of the ratio of capital we manage and costs, this is an effective and legitimate solution.

- How is the process of working with investment applications?
- Any investment initiative comes to us for consideration through the Internet portal. We did the same thing that the Far East Development Fund did in due time: we formed a "one window" in electronic form to exclude secrecy in access to long and inexpensive budget money. Upon receiving this investment application, we open a procedure within which all our interactions with the Fund are. Economic security, liquidity, credit history, market conditions, specific due diligence - procedures for drawing up an objective view of the investment object, including the assessment of investment risks, an independent assessment of the investment object, a comprehensive study of the company's activities, a comprehensive check of its financial condition and market position, in general, all that we need is that we set a task for the Fund, and they work for us, involving external consultants. As a result, all the material is collected to make a decision on a specific application. We have a decision-making center in the government of the Sakhalin Region - they open a box for us whether to finance or not finance.

- How long has this format of interaction with the Development Fund of the Far East been?
- Since March this year. The foundation for us is a strategic, professional, competent partner.

- How many projects do you get now?
- 38 projects for which investment applications were officially received and registered, for which the procedures were initiated. The cost of these projects is more than 106 billion rubles, of which our financing is about 26 billion rubles, the rest is given by private investors. We completed the procedure on three projects of them until the end, and on two more projects we will make a decision until the end of September. Thus, we have projects for which we will open funding this year, will be on the order of 5-ti from 38-mi. This is a project to expand the pig-breeding complex to 62 thousand heads (project operator is Merci Agro Sakhalin JSC), a project to build a livestock complex on 3800 heads of dairy cattle with milk processing facilities, a complex for grain storage, a slaughterhouse and a workshop for primary processing meat products (the project operator is Green Agro Sakhalin LLC), a project to expand the air fleet of aircraft (operator: Avrora Airlines), a project to create a program for lending to small and medium-sized businesses (operator - PJSC Asia tsko-Pacific Bank ") and a project to increase coal production at the Solntsevskoye deposit: construction of a conveyor and reconstruction of the port of Shakhtersk (operator - Vostochnaya Mining Company LLC).

- The speed is about the same as that of the Far East Development Fund, they approved the 6 projects for the first six months.
"I do not like the word speed here." We have stirred up the market, we have a large number of investment applications, which we bring to the state of investment projects and then we will receive a decision on financing.

- Who are the main initiators of projects in your portfolio?
- Today we have investors from Primorye, Khabarovsk, Yekaterinburg, Moscow, Novosibirsk. For us, the main thing is for the investor to be able to do what he comes for, to have money for implementation, to be convincing in his business models and the correctness of the account.

I was at a session with Andrei Sharonov, where the best world practices of the work of investment attraction agencies were discussed, Robert White, from the World Bank, spoke there. On one of the slides, he showed that, as a rule, the investor is not a resident of the territory. We have the same story. Today in our package for 80-90% investors or carriers of investment ideas - this is not a Sakhalin business. A successful business is working, which knows how to do its work and wants to replicate it, it has long been scanning territories and goes to where it has a business model. However, they do not go to Sakhalin, because we do not have a tape, but a pile foundation, 9-grade seismic, high wind and snow loads, and so on. We can attract investors by a whole system of state support measures, and we started to do this earlier than TORs and Free ports. Our regional legislation allows the regional investment project to nullify, halve, give a privilege, concluding an agreement with the investor, justifying the economic or budgetary effect.

- That is, the business idea, in fact, it, you have it takes only the site?
- Of course! His business is just localized with us, and we achieve the main goal, we locate production here, expand the taxable base, solve employment issues. Building a pig farm, we understand that not only food safety for commodity pork is realized. We form raw materials for meat processing. Meat processing entails biowaste, biogas and all the rest.

- Does the Corporation consider only the Sakhalin region as a place for the realization of objects? How about earnings "on the side", for example, in other regions of the Far East?
- Does not meet our goals.

- As much as the Fund for the Development of the Far East?
- The Fund has the same amount as ours. We initially had the cost, and the Fund came to it only this year. There was a precedent when the Fund approved the investment project at the cost of financing 13%, but the investor did not choose the money. The project on Sakhalin, now it is implementing the Corporation.

- In the perimeter of Minvostokrazvitiya of Russia, the Agency for attracting investments and supporting exports has been formed and is working, they came out to you?
- Yes, they came out on us. We work in the same field and agreed on some forms of cooperation. They are a tool that explores the market, provides consulting, packs the investor, fights with it. The Agency has money for consulting, analytics. They will concentrate at their most powerful analytical resource, which we need.

In addition, there are projects where we will go not as a loan, but as capital, as anchor investors. These are projects in the field of infrastructure, hydraulic engineering. Entering there as an anchor investor, we are still, guided by our investment strategy and investment memorandum, we will have to get out of there, we have all the financing not only paid, but also refundable. Therefore, at some point we will have the task of selling our share of participation with some profitability. At this point, we will need strong marketing, and we look forward to the return from the Agency.

- The Corporation's capital, if not secret, in what banks lies?
"We have no secret in this." We got money in the capital not in order to get maximum profitability in the financial market. For us, the most important thing is to preserve capital and multiply it a little. We approved on the board of directors the rules for the placement of free cash, prescribed requirements for the banks in which we will post. Today we have 4 banks under these criteria - these are Gazprombank, Sberbank, VTB and Rosselkhozbank. Inside this pool, we place with maximum profitability, but we have limits on each bank, based on the ratio of their capital and ours. Sberbank has a bigger limit, and Rosselkhozbank has a smaller one. Thus, the tactics of allocating available funds are determined by two figures: the limits on banks and the maximum possible profitability.

- You said that you earned 3,5 billion rubles for the year?
- For 9 months. But it is easily considered. 50 billion * 10% - the average rate is almost the same.
Tags: Sakhalin Sergey Hotochkin BWCO FRF