128 thousand kilometers around the cosmodrome 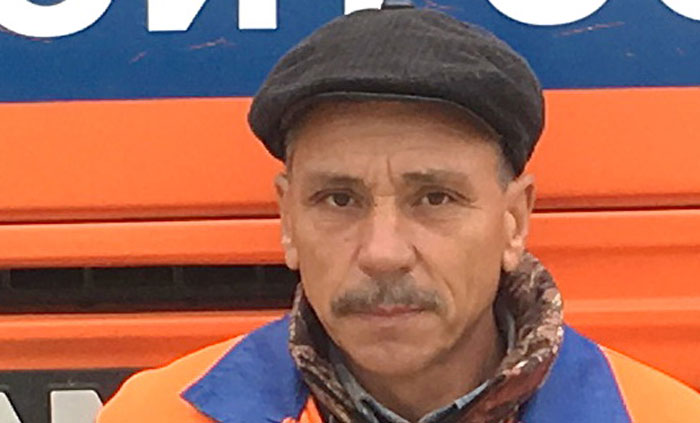 In 1990, Igor Aleksandrovich received a specialty in mechanical engineering, but managed to work on this profession for less than a year. Having moved with his family to a permanent place of residence in the Khabarovsk Territory, he made a firm decision to get a job as a driver and in the future never changed the chosen road.

Soktin is recognized: “For many people, the profession of a driver is nothing special, it's very simple, just turn the steering wheel and don't think about anything. For me, it's a whole life! I'm used to the fact that on the road you never know what lies ahead. I was offered to go to work in my specialty - a foreman, a mechanic, but I refused all the time. Already used to driving all the time. Believe me, the life of a driver is very busy. We "went" everywhere: Sakhalin, Primorye and Priamurye, constantly on long-distance flights. He worked practically all over the Far East. And I am sure that in order to become an excellent driver, you need not only practice, increased attention and diligence, but also a vocation. If not given, the person will not ride. A driver is a state of mind, if there is interest, then certain heights can be achieved in this area. "

In June, 2006, Igor Soktin began his career in the Far Eastern Main Office of Spetsstroy of Russia. Today, with more than 26 years of experience as a driver, he confidently notes: "This is not the limit, I like my work. And the attitude towards people in Spetsstroy of Russia is spiritual, the way of life is well organized. "

During his work in Dalspetsstroy, Igor Alexandrovich took part in the construction and reconstruction of objects of federal significance. He worked on the construction of the highway “Amur” Chita - Khabarovsk, which is the most important element of the regional transport infrastructure connecting the central part of Russia and the Far East.

He participated in the construction of sections of the Lidog-Vanino highway, performed work at the facilities of the Onshore Technological Complex as part of the construction project “Arrangement of the Kirinsky Technological Complex” on Sakhalin Island. At all sites, Soktin performed significant tasks, without which it would have been impossible to carry out construction at an active pace: he carried out transportation of equipment, technical cargoes and materials. But the most interesting road of his life was ahead!

In February 2012, Igor Aleksandrovich as an experienced and responsible specialist was one of the first to be sent to the Amur taiga to work on the construction of the objects of the Vostochny cosmodrome. To organize the beginning of work Dalspetsstroy needed in a very short time to redeploy property, special equipment, organize shift camps.

“I was enthusiastic about the opportunity to work on the construction of an object of such importance, I was even delighted. To date, I have worked a lot of time on Vostochny, both on long-distance flights and at the location of the facility. From Khabarovsk and Vladivostok, in heavy trucks and trawls, construction equipment and household wagons were relocated to the cosmodrome to ensure the start of construction and installation work. At the launch site itself, he carried out the transportation of almost everything necessary for construction: piles, slabs, reinforced concrete products. I have never stood without work. I have never had any accidents, there were only dangerous situations and, of course, sudden breakdowns of the car, when I had to quickly and independently repair the car, sometimes even at night, so to speak, in extreme conditions. But in any conditions and despite any difficulties, my work always brings satisfaction ", - says Igor Alexandrovich.

At the Eastern Cosmodrome, Igor Soktin transported goods for the construction of on-site highways and railways of the launch and technical complexes, access roads to the cosmodrome. During the period of work at the construction sites of Vostochny, it carried out more than 80 flights, transported over 1300 tons of cargo. And the total mileage of the flights made by him was 128 thousands of kilometers, which is comparable in distance with traveling around the Earth at the Equator more than 3 times!

All the tasks Igor Anatolyevich performed with due professionalism, transportation of goods was carried out exactly in the specified time, which is certainly very important. From the successful work of drivers, machine operators, builders, engineers depended on the outcome of the construction of the century. At the end of April 2016, the launch vehicle Soyuz-2.1 was successfully launched from the first civilian Russian spaceport. Nevertheless, the cosmodrome continues to develop! And now the forces of Dal'spetsstroevtsev are directed to erecting objects that did not participate in the first launch of the launch vehicle. Igor Soktin continues to work on the Eastern driver, now he himself does not represent himself in another profession and can rightly serve as a worthy example for novice drivers.

By decree of the President of the Russian Federation for merit in the field of construction and many years of conscientious work, Igor Soktin, driver of 1 class of Dalspetsstroi branch “Spetsdorstroy No. 733”, was awarded the Medal of Order for Services to the Fatherland of 2 degree.