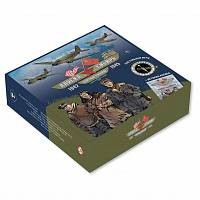 The game was prepared in honor of the 75th anniversary of the victory in the Great Patriotic War based on the famous lend-lease - the supply of military and humanitarian cargo via the Alaska-Siberia air route. The game turned out to be entertaining, patriotic and “boyish”.
Airplanes of various types, secret airfields, radiograms - all this awaits the guys at Alsib.

Each player can imagine himself a pilot of the Great Patriotic War and become a hero of Alsib, overcoming the obstacles that have arisen on the way, in order to be the first to come to the finish line.

Materials along the Alaska-Siberia highway remained classified until the 1990s. The story of Alsib is comparable in severity of the tests with the fighting at the front. In the harsh conditions of the northern climate, the pilots drove the planes that came from Alaska by land-lease to Krasnoyarsk, and then to the front. The importance of the air bridge was extremely important: about 8 military vehicles were delivered along the highway during the war, which was a huge contribution to the victory over the enemy. Each player can imagine himself a pilot of the Great Patriotic War and become a hero of Alsib, overcoming the
obstacle paths.

Before each move, the player evaluates the situation on the map, and then makes a decision on departure. The strategy of the game is to choose the order of the distilled aircraft from your group, you need to take into account the weather conditions in the landing zone, as well as the availability of seats at the selected airfield.

The game allows you to develop logic and thinking. Having joined the game process, it is necessary to carefully analyze each current situation, make quick decisions, and be smart.

The plot of the game and the events taking place on the track are as close as possible to the reality of the war years. Airplanes flew over the deserted, uninhabited taiga and the harsh Arctic tundra, overcoming severe weather conditions, because they were urgently needed at the front. In a playful way, children and their parents get acquainted with the participants of legendary events, learn about the exploits of the heroes who gave their lives for their homeland.

The heroism of thousands of Soviet people in the rear and at the epicenter of hostilities is an example of unity, confidence and extraordinary courage that cannot be forgotten.

Kolyma. A modern guide to the Magadan Region 650 rubles.
buy

Yakutia. A modern guidebook Not available

100 Wonders of the Far East Not available

Crimea. A modern guidebook Not available